Navigators Holdings continues to build a large fleet of gas transporting vessels, and the market keeps selling off.

So what: Navigators Holdings isn't the only company in the liquefied gas shipping business that's taken a beating over the past year: 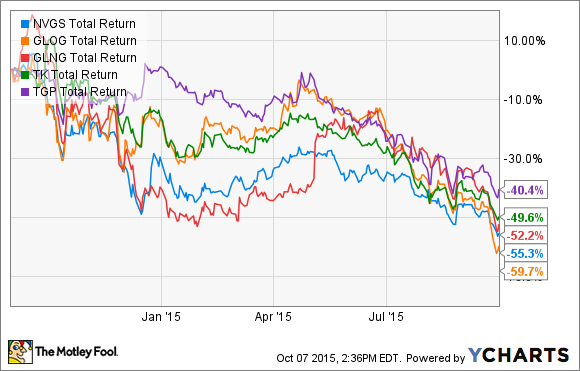 Plain and simple, any company that's attached to the export of liquefied natural gas (LNG), byproducts like ethane and butane known as natural gas liquids (NGLs), or any of the various chemicals that can be made from them, has been affected by a number of concerns related to demand of these chemicals, especially in Asia.

A weakening Chinese economy -- and the impact that is already having on many of its neighbors in Asia -- is a major concern, with huge numbers of export projects lined up to meet what has been expected to be huge demand growth for the chemicals that are used to make everything from fertilizer to cars to soda bottles, not to mention the lower-pollution benefit of natural gas as a fuel for transportation and electricity generation.

But that's just part of the story, since the price for these stocks as a group has correlated closely with the movement of oil prices over the past year: 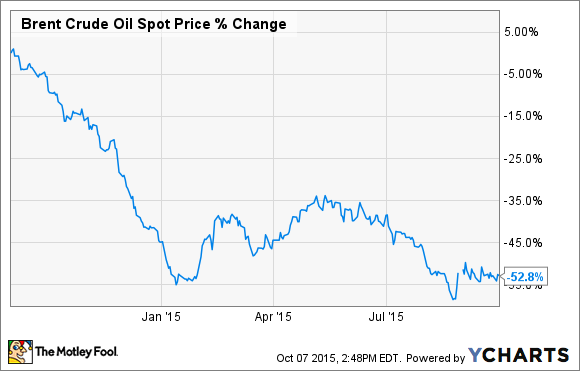 The funny thing is, Navigator actually gets some benefit from the American drilling boom, which has contributed to the decline in oil prices, since many of the gases it transports are made from NGLs, of which there is a massive overabundance in North America. And since its revenue is more related to volumes and not the cost of the commodity, the market may be looking at the wrong thing.

Now what: Despite the market's fears of falling commodity prices and weakness in potential import markets, Navigator Holdings is probably oversold at this point. Furthermore, there are several major long-term developments that should continue to support growth, including tens of billions of dollars in petrochemical manufacturing expansion on the U.S. Gulf Coast, as well as extensive export terminals to handle the products from these facilities, as well as other NGLs like propane, or LPG.

Looking at the big picture, now may be a good time to consider buying some shares, even with the stock having gained back almost all of its September losses, barely one week into October.

The reality is the stock is no lock to only go up from here: It's going to remain volatile, with further swings both up and down while the short-term traders look for momentum shifts, and the market tries to figure out how big the opportunity really is. But if you're willing to ride out that volatility, Navigator Holdings is likely to be a market-beating stock over the next three to five years.

Here's Why Navigator Holdings Ltd Stock Was Up 25% Last Month

Shares of Navigator Holdings Takes a Nose Dive In June
415%