Profit has been surging this year at Mexican ultra-low cost carrier Volaris (NYSE:VLRS). Through the first half of 2015 (a seasonally slower time of year) Volaris posted an 8.8% operating margin, up from a -9.6% operating margin in the prior-year period.

Profit has skyrocketed at Volaris this year. Photo: The Motley Fool

Analysts expect Volaris to continue growing its profit margin in the second half of the year, but at a much slower pace. However, they may still be underestimating the company's profit potential. Volaris has seen strong demand lately, allowing it to significantly increase its aircraft utilization -- which should help bolster Volaris' profit margin.

Why aircraft utilization is important
One of the key ways that ultra-low cost carriers keep costs down is by operating young fleets with the most fuel-efficient aircraft. That helps reduce fuel costs. The trade-off is that they have to pay higher monthly aircraft costs, for the same reason that buying a new car is more expensive than buying a used car.

However, airlines can offset the impact of operating expensive planes by using them more. This spreads fixed monthly rent payments across more passengers.

This high aircraft utilization -- along with a very dense seating configuration -- allows Spirit to keep a very young fleet (its planes are 5.2 years old, on average) while also having non-fuel unit costs among the lowest in the industry.

The potential downside of high utilization
The downside to utilizing aircraft more is that the "extra" hours have to come at lower-demand times, since airlines will always maximize utilization during the busiest days and times of the week.

As a result, it can be hard to fill the flights added by increasing aircraft utilization. Fortunately, ultra-low cost carriers are able to offer extremely low prices in order to entice travelers to fly at inconvenient times. Indeed, Spirit and Volaris both have significantly better than average load factors (the percentage of seats filled by paying customers) despite their high aircraft utilization.

Volaris ramps up aircraft utilization
In the recently ended third quarter, with demand stronger than ever, Volaris decided to crank up its aircraft utilization. Volaris entered the quarter with 53 airplanes: up about 10% from 48 a year earlier. It also has somewhat more seats on each plane, thanks to its gradual shift toward larger planes like the A321 and an initiative to add five seats to each of its A320s. As a result, counting by seats rather than planes, Volaris' growth is close to 15%.

But despite having only 15% more seats in its fleet, Volaris increased its capacity by 24% last quarter. This implies that it increased aircraft utilization by about 8%. Importantly, load factor only declined by a fraction of 1% despite the rapid capacity increase.

Higher utilization and solid demand drive earnings upside
Recently, it has become even more important for Volaris to maximize aircraft utilization because of the rapid devaluation of the peso against the dollar. This makes dollar-denominated costs like aircraft rent more expensive when converted to pesos. 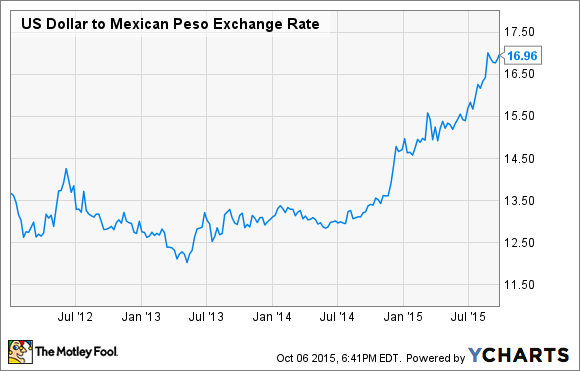 US Dollar to Mexican Peso Exchange Rate data by YCharts

Volaris' biggest dollar-denominated cost is jet fuel. Fortunately, the sharp drop in oil prices over the past year is more than offsetting the impact of the weak peso on this line item. Aircraft and engine rent is the No. 2 dollar-denominated line item, representing 21.5% of total operating expenses in Q2.

Rising aircraft utilization will allow Volaris to offset some of the negative impact of the weak peso on its cost structure. This, combined with strong underlying demand, should allow Volaris to comfortably beat Wall Street's estimates for both revenue and earnings per share in Q3.

In fact, I would not be surprised to see Volaris report Q3 EPS of $0.40-$0.50, excluding any potential special items. That's far ahead of the average analyst estimate of $0.33. An earnings beat of that magnitude could help Volaris stock continue rallying.