Kinder Morgan Inc (NYSE:KMI) investors have endured a pretty rough couple of months; the stock is down nearly 25% since it last reported earnings. This sell-off is due to the fact that the market is growing more worried about the company's ability to navigate a long-term downturn in the oil market. As such, Kinder Morgan can do a lot to calm those fears by uttering three important phrases in its third-quarter earnings release, or on its conference call next week.

Over the past month, Kinder Morgan's dividend yield has increased from 4.75% to 6.5% as a result of its plunging stock price, as we see on the chart below. 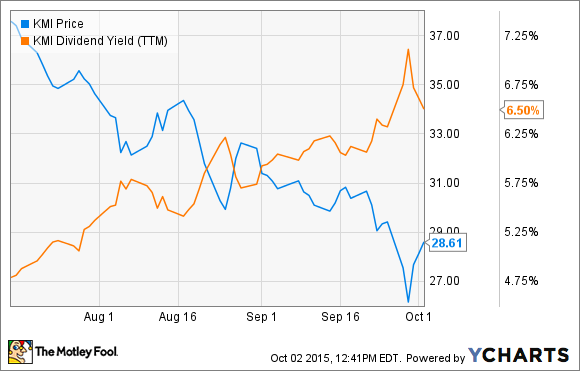 That drop is a signal by the market that it's growing concerned the payout isn't sustainable. Because of this, the company will again need to remind investors that the dividend is safe. Last quarter, for example, founder Richard Kinder was quoted in its earnings release saying:

We remain on track to meet our full-year dividend target of $2.00 per share. While commodity prices continued to pressure the industry this quarter, we continued to produce strong results due mainly to our large, diversified asset portfolio and fee-based cash flows predominantly supported by take-or-pay contracts.

While he has said that numerous times since the onset of the downturn, investors apparently need to hear it again. That's especially true this quarter since the company is expected to report a shortfall between its distributable cash flow and declared dividends. CFO Kim Dang warned of this on the conference call last quarter, saying "the third quarter [dividend coverage] will be tight" as it is traditionally a weak quarter for the company.

To ease all of these concerns, the company will need to slam the door shut on any worry about the dividend's safety.

2. "There is no change to our dividend growth plan."
In addition to that, the company will need to reconfirm the fact that it still plans to grow its dividend by at least 10% per year through 2020. The company reiterated this last quarter on its conference call, when Kinder was quoted as saying:

We raised the dividend to $0.49 for the second quarter. We're on track to meet our target of delivering -- declaring $2 for full year '15 with substantial excess coverage even after adjusting for the current commodity prices, and we expect to grow our dividends by 10% each year from 2016 through 2020.

Announcing another increase of the dividend by at least a penny per share again this quarter will certainly help. However, reiterating the dividend growth plan again also wouldn't hurt.

3. "Our backlog increased."
One other way the company can ease investors' fears over its future growth is to show growth in its project backlog. As of the end of last quarter, that backlog stood at $22 billion, which can be seen on the slide below. 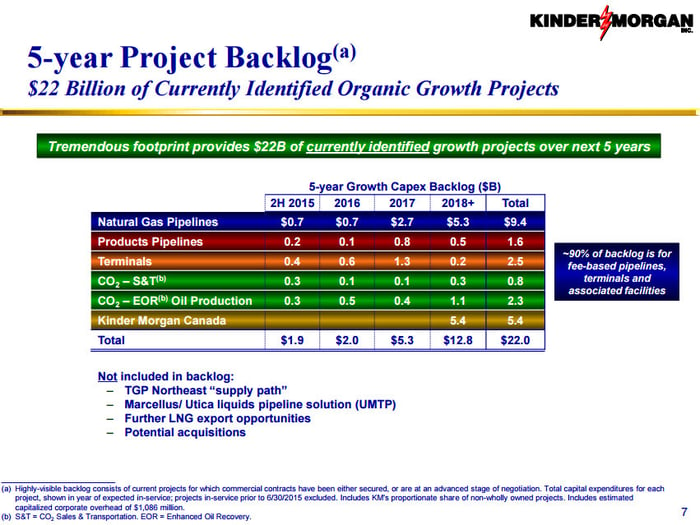 This number rose last quarter after the company made some significant additions to the backlog, which were detailed by CEO Steve Kean in the earnings release:

What investors will want to see is another net increase to the backlog. That's a distinct possibility since over the past few months, the company has announced a couple of new project updates, including $212 million for natural gas pipelines to an LNG export facility in Texas, new commitments for the supply path of its NED project, and the acquisition of additional Jones Act tankers currently under construction.

Still, there is a concern that additional projects will be removed from its backlog, especially in its CO2 segment, where the company had planned to spend more than $3 billion over the next few years. That's why investors want to hear that the company is adding enough new projects to more than offset any removals from the backlog.

Investor takeaway
Kinder Morgan investors are nervous these days as the stock price has really taken a beating along with the rest of the market. That's why the company needs to come out and calm their fears by saying the dividend is safe, its dividend growth rate is unchanged, and its backlog of future projects has increased. That would show investors that they really don't have any reason to fear, as the oil market downturn isn't having much of an impact on the Kinder Morgan's current operations, nor its future plans.