What: Shares of Tuesday Morning Corporation (NASDAQ:TUES) fell 31.8% in the month of September, according to S&P Capital IQ data, after the surprise resignation of its CEO. Combined with a series of steady drops as the off-price retailer continued to disappoint investors with each quarterly report, shares of Tuesday Morning Corporation have fallen more than 70% so far in 2015: 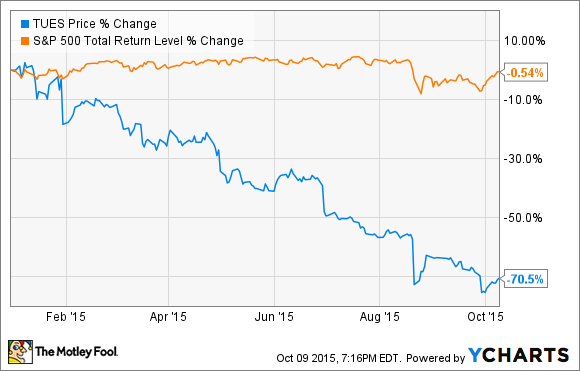 So what: Unfortunately, the surprise departure of CEO Michael Rouleau on September 29, 2015 marked only the latest in management turnover for Tuesday Morning. The company just appointed a new chief operating officer this past April, and the market reacted similarly to the latest drop in late June after Tuesday Morning announced CFO Jeffrey Boyer would tender his resignation effective July 22, 2015. Boyer, for his part, notably left to become CFO of Pier 1 Imports, while Rouleau is retiring, and will serve as a consultant to Tuesday Morning through March 31, 2016 to ensure a smooth transition.

In the meantime, rather than appoint an interim CEO, Tuesday morning has created a new "Office of the Chairman" role led by Board Chairman Steven Becker. The company has also hired an executive search firm to evaluate permanent CEO candidates.

As for Tuesday Morning's actual results, last quarter the company saw revenue rise just 0.2% year over year, to $213 million, which resulted in a net loss of $0.10 per share. Analysts on Wall Street were only expecting the company to incur a loss of $0.02 per share.

Now what: That doesn't mean Tuesday Morning can't eventually turn around its business. Shortly after its quarterly report in August, Stifel analyst Taylor LaBarr suggested that long-term investors could still benefit from a turnaround. After a period of investment in fiscal 2016, Labarr says, Tuesday Morning could achieve positive cash flow starting in fiscal 2017.

Tuesday Morning is set to announce first-quarter fiscal 2016 results later this month, so investors will be listening closely for more on its plans to reinvigorate growth and achieve sustained profitability. But for now, without a permanent CEO, and given the cloud of uncertainty that still surrounds Tuesday Morning, I think investors would be wise to avoid the stock until it demonstrates more tangible evidence of its turnaround.