The discount retailer bounced back after an earnings-related sell-off.

What: Shares of Tuesday Morning Corporation (TUES) gained 20.8% in February, recovering from an earnings-based sell-off at the end of January. As the chart below shows, the stock recovered alongside the gains in the S&P 500 as concerns about a recession ebbed. 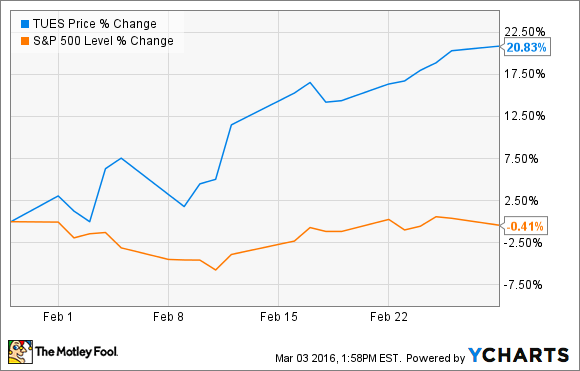 So what: There was little news out about the company during the month as the stock seemed to benefit from the broad market recovery and a short squeeze. Several other heavily shorted stocks turned in a similar performance during the quarter, indicating a pattern in investor behavior. With 15.6% of shares sold short, a recovery in the stock could have prompted a buying spree as short-sellers rushed in to close their positions.

Tuesday Morning shares have been hit hard over the past year, falling close to 70% since their peak last January. However, the stock seems to have hit a bottom based on its performance since September and as it's shown signs of recovery in its recent earnings report.

Now what: In the second-quarter report released on Jan. 29, Tuesday Morning delivered comparable-sales growth of 8.4%, a rate that would usually be cause for celebration. Instead, investors sent the stock down as earnings disappointed, but the same-store sales improvement is proof that management's efforts to turn around performance is gaining traction. The company's efforts to improve its stores, merchandising, and supply chain appear to be bringing customers back into the stores.

CEO Steve Becker said that margins should continue to be pressured as the company invests in a new distribution center in Phoenix, but if it can continue to put up comps like we saw in the past quarter, profits should eventually follow.