Please ensure Javascript is enabled for purposes of website accessibility
Free Article Join Over 1 Million Premium Members And Get More In-Depth Stock Guidance and Research
By John Rosevear - Oct 11, 2015 at 8:05AM

*Ford's F-Series is still outselling GM's Chevy Silverado by a comfortable margin. But Ford and GM are parsing the data in ways that let them both claim "victory" in the pickup sales wars. Who's right? And does it matter?

Ford's ( F 3.85% ) F-Series line of pickups has been America's best-selling vehicle line of any kind for 33 years -- and counting.

But the F-Series has had a tough year in 2015. The F-150 makes up roughly 70% of F-Series sales, but supplies of the new-for-2015 F-150 were tight for months because of the complicated factory changes needed to make the new truck.

With three months to go in 2015, can Ford eke out a 34th consecutive year of sales leadership?

The short answer is that Ford probably has it in the bag. But it depends on how you look at it -- and GM will probably have some bragging points of its own once 2015 is in the books.

Here's the simple chart that shows how the race -- in Ford's view, at least -- stacks up right now: 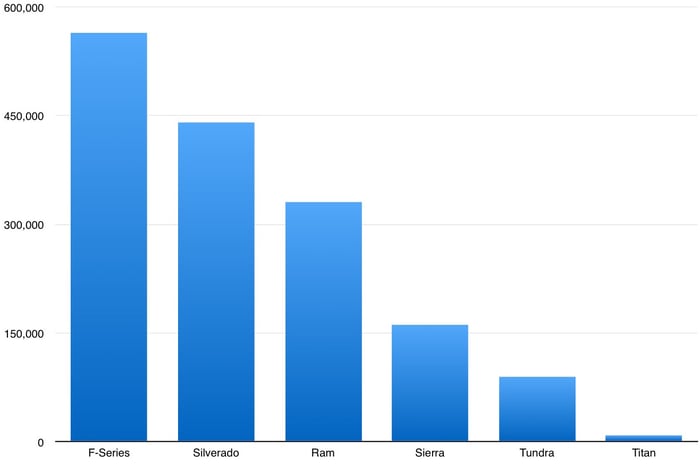 2015 sales of the top six full-size pickup truck lines through September. Data provided by the manufacturers.

Really, it's not close. The F-Series leads GM's Chevrolet Silverado line by 123,547 sales with just three months to go. The Silverado would have to out-sell F-Series by over 40,000 a month for the rest of the year just to catch up. Given that GM sold 43,725 Silverados to 69,651 F-Series last month, that's obviously not happening.

But GM sells two lines of full-size pickups -- the Silverado and its upscale siblings, the GMC Sierra family. If we add them together, the story is a little different. 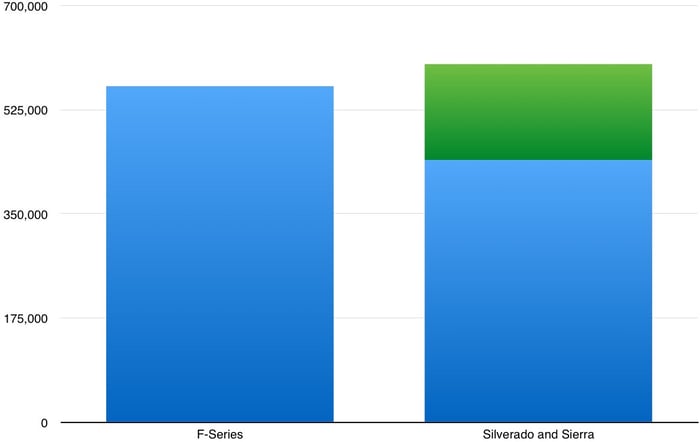 2015 sales through September. GMC Sierra sales are in green. Data provided by the manufacturers.

Through September, GM's twins have out-sold F-Series by 38,106 trucks. At this time last year, Ford was leading the GM twins by 27,595 trucks.

So who's winning? Ford is winning the contest that its marketing people care most about -- "America's best-selling vehicle line." But GM gets to brag too: It has sold more full-size pickups in 2015 than Ford. And right now at least, it has a bigger market share.

Of course, this is Detroit, which means that no hair is too fine to split if there's a sales victory to be claimed. It's not a surprise that both companies want to make this comparison even more complicated.

GM may sell the most "pickups," but Ford sells more vans -- what counts as a 'truck"?
GM added two new pickups for the 2015 model year, the midsize Chevy Colorado and GMC Canyon. GM likes to fold the sales of its midsize twins in with its full-size numbers to make statements like, "On a retail basis, Chevrolet and GMC pickups were up 24 percent in September and they are up 30 percent calendar year to date."

(Well, of course they were. At this time last year, the Colorado and Canyon has just started arriving at dealers. Through September, GM has sold 85,658 of the midsize trucks, versus just 125 a year ago. And GM is also parsing "retail" sales versus "total" sales -- but that's a whole different discussion.)

The Blue Oval doesn't sell a midsize pickup in the U.S. right now, so it's not really a fair comparison. But Ford folks point out that in order to make room to build the new midsize pickups, GM apparently had to cut back on its production of commercial vans.

So now Ford is starting to fold its van sales into "trucks". Ford's new commercial vans, the Transit lineup, are big-selling hits. Ford has sold 122,912  so far this year, while GM's vans(the Chevy Express and City Express, and the GMC Savana) have sold just 68,004.

So who's "winning"? Again, it depends on how you look at it.

Does it really matter?
It does to some extent. Ford gets some good marketing mileage out of the "best-selling nameplate" sales crown. It would be a big coup if the Silverado managed to steal it, but that won't happen in 2015.

GM will probably get to claim that it sold more full-size pickups, though. That's less of a coup -- it's not the first time that GM's two trucks have out-sold Ford -- but it's still a win.

That said, I don't see either automaker going all-out to chase sales titles at the expense of profits for an extended period.

GM in recent years has learned a hard lesson about the pursuit of sales crowns at all costs. These days, CEO Mary Barra is much more interested in profits -- returns on invested capital -- than in total sales leadership.  That's also true of her crosstown rival, Ford CEO Mark Fields.

Both Ford and GM are making very good profits on their trucks right now. I don't see either one of them doing anything that would put those profits at risk -- even for a sales victory.