When Buffett was first starting out in the investment business back in the 1950s, he subscribed to the numbers-focused, value-obsessed investing philosophy he learned from his mentor, legendary value investor Benjamin Graham. However, over the past five decades, Buffett has come to appreciate the qualitative aspects of a company, too. Rather than simply buying stocks because they're cheap relative to the underlying company's book value, he also seeks out companies with top-shelf management teams and industry-leading market share.

Although Buffett doesn't tip his hand regarding new investments that he's thinking of buying, Stratasys (NASDAQ:SSYS), Axiall Corporation (NYSE: AXLL), and Joy Global (NYSE:JOY) all seem to pass quantitative hurdles that would qualify them for consideration by the Oracle of Omaha. For example, all three have seen their book value grow and their price-to-book ratio plummet in the past five years.

However, looking at these companies more closely, perhaps only Joy Global would pass muster with Buffett on both the quantitative and qualitative measures he values most. Here's why.

Would Buffett buy into a 3D printing leader?
In the case of Stratasys, Buffett typically doesn't like to invest in complicated businesses, so 3D printing might scare him off. However, Buffett could be attracted to Stratasys because 3D printing is increasingly being used throughout manufacturing, including aerospace -- an industry that appeals to Buffett so much that he recently paid $37 billion to acquire Precision Castparts, a major supplier to the industry.

Stratasys, which sells its 3D printers to a variety of industrial companies, such as Airbus, boasts one of the best product lines in an emerging and disruptive market, and Stratasys CEO David Reis is a 13-year veteran of the 3D printing industry. Because Stratasys trades at a P/B ratio of just 0.65 and its book value has grown 81% over the past five years, it's an arguably cheap stock. 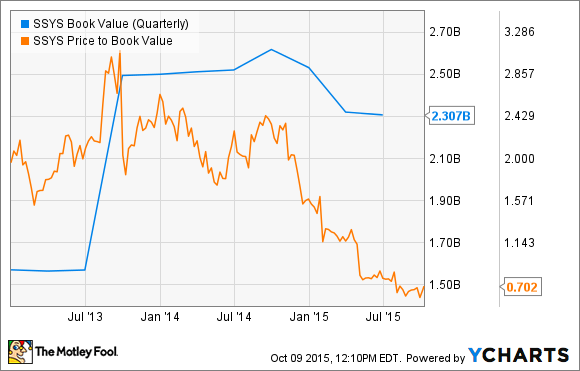 But Stratasys isn't without risks. Its shares are cheap because of an industrywide sell-off tied to slowing year-over-year sales and profit growth.

However, investors ought to remember that the 3D printing market is maturing, and that means fits and starts are to be expected. Further, investors should recognize that much of the company's profit drop owes to its investments in its own product line -- something that's necessary for it to maintain its leadership in this space.

Overall, Buffett might be intrigued by Stratasys, but this is one company that's probably at too early a stage in its life to whet his appetite. In Buffett's 2014 letter to shareholders, he indicated that he's interested in companies with pre-tax earnings of at least $75 million, and Stratasys doesn't deliver on that bogey.

Is a basic-materials maker more Buffett's speed?
Because of Buffett's interest in proven pre-tax earnings, he might be more interested in purchasing Axiall Corporation, a basic-materials company that produces a wide range of chemicals used to make PVC and vinyl products, including PVC pipe and vinyl windows and siding.

Axiall was created when Georgia Gulf merged with PPG's chlor-alkali business in 2013, and that year the company generated over $225 million in pre-tax income. Because a lot of the company's business is tied to housing, a broad-based recovery in the United States has offered some tailwinds, and that could intrigue Buffett, who already owns a home builder, housing suppliers, and the paint company Benjamin Moore.

Axiall's book value jumped when it merged with PPG's business, and in the past year its price to book value has dropped to levels last seen during the Great Recession. 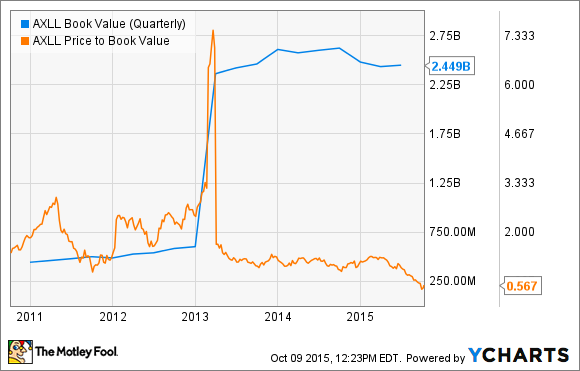 But Axiall's management uncertainty could give Buffett pause. In the past year, post-merger integration struggles and tougher competition from overseas led Axiall's CEO to "retire" this past summer after seven years on the job. Axiall hasn't announced a permanent successor yet, and Buffett has previously been clear in his desire to seek only company's with top-notch leaders already in place. Therefore, until Axiall's management questions are answered, Buffett is likely to take a pass on this one, too.

One stock Buffett ought to love
This brings us to our final candidate: Joy Global, a company that's well established as a worldwide leader in mining equipment.

Joy Global's surface and underground machinery is deployed by businesses mining for commodities like coal and iron ore in virtually every corner of the planet. Yet despite Joy Global's standing in the industry, its shares have taken a beating over the past couple years as coal mining has slowed in the U.S. and economies in Europe and Asia have struggled.

Although slowing demand for commodities has been a big blow to Joy Global shareholders, investors like Buffett recognize that businesses like these are secular, and for that reason, a long-term investing thesis that is based on an ever-growing and increasingly wealthy world may be enough reason to look beyond Joy Global's short-term struggles.

If European quantitative easing and emerging-market stimulus programs can kick-start the global economy, then there's bound to be a lot of pent-up demand to service or replace old mining equipment; especially given the backdrop of long-term trends. In such a scenario, Joy Global CEO Edward Doheny, who spent 21 years at Ingersoll-Rand before joining Joy Global in 2006, could be the perfect leader to capitalize on the opportunity.

In any case, we need a global economic recovery to help drive this company forward, and there's no telling when that could happen. Regardless, because Joy Global's book value is up 28.4% in the past five years, its shares are trading at just 65% of book value, and the company has a solid management team in place, picking up shares when they're in the bargain bin might make sense -- especially given that Joy Global's $325 million in pre-tax net income over the past 12-months remains far north of Buffett's minimum for consideration. 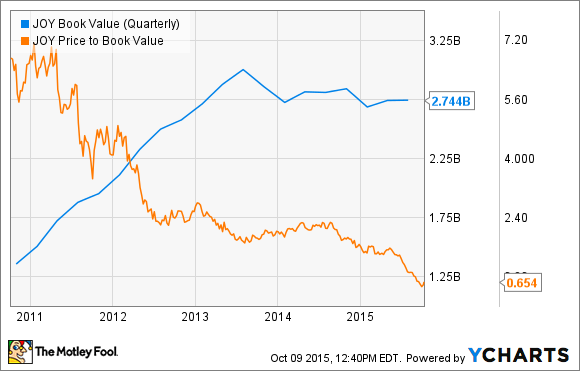 Tying it together
Warren Buffett manages so much money nowadays that he has to focus his attention on large companies that can still move the needle for Berkshire-Hathaway. As a result, his criteria for an investment exclude a lot of companies that may otherwise be intriguing to him and other value investors. Nevertheless, though I can't say whether Buffett would buy any of these three companies, Joy Global certainly looks like the most Buffett-worthy stock of the lot.