When your child goes on the road to college, a 529 plan could help pave the way.

Saving for college is an enormous burden for today's parents. No generation before them has had to deal with such costs when a child has left home. Over the past two decades, the price tag for higher education has ballooned well beyond inflation: What was once a four-year payment equal to buying a car has now become a five-year-plus commitment equivalent to buying a new house.

This is where the 529 Plan comes in. It's one of the most commonly used programs the government has set up to help offset the costs of college. But there's a lot about the 529 Plan that people aren't aware of. If you have a son or daughter who will eventually attend college, then you need to know the details -- including where best to invest your money.

We've crunched the numbers and have the details below.

Signed into law in 1996, 529 Plans are tax-advantaged plans that are administered by each state to help encourage residents to save for college expenses. The federal government and some states tax money before it is put into a 529. However, capital gains and disbursements are tax-free, so long as they are used for qualified college-related expenses.

Do certain states offer other tax benefits with a 529 Plan?
While the money you put into a 529 isn't tax-deductible at the Federal level, some states allow you to deduct taxes on the state level. But even then, there are restrictions. For instance, most states will only give you the tax break if you invest in your state's plan, as opposed to another state's plan (more on that below).

Below is an example of a couple with two children and taxable income of $100,000. They are able to invest $100 per month per child. Here are the tax savings that the couple would realize based on their state of residence, assuming they invest in their state's plan. 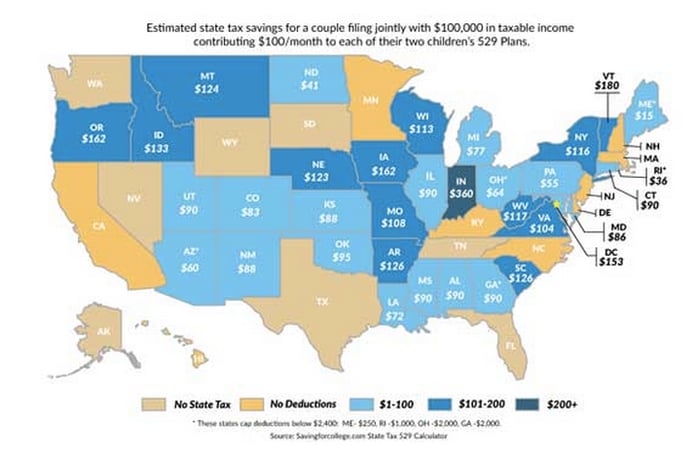 Photo: Savingforcollege.com, with use of the site's 529 calculator.

Furthermore, there are six states that allow you to deduct some of your contributions, even if you are using a different state's plan. They are Arizona, Kansas, Maine, Missouri, Montana, and Pennsylvania.

Wait, you can use a different state's plan?
That's right -- a 529 Plan is more or less an open marketplace where anyone, from any state, can use the plan they deem the best. If you live in Texas, you can use a 529 Plan offered by California and eventually spend the money going to a college in New York. That's why it's so important to investigate which state's plans are the best.

Of course, if you're not from one of the six states I mentioned above, then this will probably mean forfeiting any state income tax advantages that you might have enjoyed. However, having researched all the offerings, I think the pros of choosing an excellent out-of-state plan far outweigh the cons of missing out on relatively small tax breaks.

The only exceptions to this are the 529 plans of Louisiana, New Jersey, South Carolina, and the District of Columbia, as well as one of the two plans offered in West Virginia. The only people who can participate in these direct-sold plans are residents of those jurisdictions.

Are there different types of 529 Plans?
There are several different types of 529 Plans, but most can be divided into two categories. The first and much less common type is a prepaid option, where a family purchases a certain number of college "credits" at today's rates. Those credits appreciate at the same rate as college costs and are then redeemable at a later date.

The more common type of 529 Plan is the College Savings Plan. Families invest money over time on behalf of their children, and the money can grow tax-free.

This category can be further divided into two categories: direct-sold and broker-sold. I highly recommend using direct-sold plans, as the fees are usually much lower. You can find links to all direct-sold plans by visiting this page.

Which 529 Plans have the highest returns?
Everyone wants to put their money behind an investment that will grow the fastest. Saving for a child's college education is not like saving for retirement. When it comes to the latter, most people have over four decades to watch their money grow. But with the former, parents generally have 18 years, and the clock starts ticking the day a new baby is born.

Each state has its own array of investment options. It would have been prohibitively time-consuming to go back and investigate how every one of these plans has performed through the years. But to give readers a starting point, I chose what I believed to be the most basic of all plans from each state and back-tested them to see how they've performed over the last three years.

Almost all of these plans are age-based or target date funds. In essence, this means that the 529 Plan focuses on riskier growth stocks earlier on and becomes more conservative as your child gets closer and closer to college age. Some states go even further to offer "aggressive" and "conservative" target date funds. When given the option, I ran the numbers for the middle ground "moderate" plans.

Below are the results from each state's plan, extrapolating the returns of the last three years out over the course of 18 years.

You might notice that not every state is included, and there's a good reason for that. Not all plans had been around long enough to accumulate a three-year record, so they weren't included. Additionally, there were states that didn't have a plan that fit the "moderate age-based" bill, so we couldn't make an apples-to-apples comparison.

But perhaps the most important thing to keep in mind is an old adage: "Past results are no guarantee of future performance." Over any three-year period, there will be winners and losers. Because you're investing in a fund -- and not picking the holdings individually -- you have no control over what actual results are. Even if you were in charge of the investments, markets boom and bust, and there's no telling what the next year (or 18 years) will bring.

That leads us to our next question:

Which funds have the lowest fees?
Some might say that returns are far more important than fees. And when all is said and done, those people have a point. But the best way to be successful in investing is to focus on what you can control. And when it comes to investing in a 529 Plan, fees are easily the most important variable that you have control over. If we go back and look at the list of states, we see a very different list emerge in terms of the most favorable 529 Plan fees (that fit our "moderate age-based" profile).

You'll notice that more states are included in this list than in the first. That's because we know what the fees will be even before a fund has three years to establish a record of returns.

Over time, those in New York's system pay far less for their 529 Plan than the average D.C. resident. But if the D.C. plan outperforms New York's -- even after taking fees into consideration -- how do we square these contradictions?

So what's the best 529 Plan?
In truth, there's absolutely no way to know which plan will have best met your needs 18 years from now. The future is wholly unpredictable. The best we can do is use the information we have available to make the smartest decision possible.

Below, I've plotted each plan's (with a three-year track record) fees on one axis and its returns on another. I've divided the entire group into four categories:

Here's how each plan fared.

In the end, if I had to put my money into any plan, it would be Illinois'. Fees of just 0.19% alone would be enough to convince me -- and impressive historical returns of 10.3% per year would be icing on the cake. On the other end of the spectrum, I would avoid investing in North Dakota's plans altogether.

But this information alone shouldn't be your ending point -- just a starting point to help you lay the foundation of your college savings plan. I highly suggest using Savingforcollege.com as a resource in your search for the perfect 529 Plan, as the site has tons of information for the curious parent.

In the end, the process alone might be enough to make you a better investor.