Chuy's Holdings (NASDAQ:CHUY) prides itself on being a successful business with a highly acclaimed menu of made-from-scratch, authentic Tex-Mex dishes. The stock has more than doubled from from its IPO price of $13 per share in July 2012.

As with any company that has proven profitable and compensated shareholders in the process, the question is: How much more success can we expect from Chuy's? Let's take a closer look at the reasons the company may have more value to unlock for investors.

Impressive results with a side of healthy financials
As of Chuy's most recent earnings report for the second quarter of 2015, the company had $7.6 million in cash and equivalents, up from $3.8 million reported at the end of fiscal 2014. Chuy's also paid off $8.5 million dollars in outstanding debt at the end of the first quarter leaving its balance sheet debt-free.

Most recently, net income increased a notable 55.9% year-over-year to $5.4 million. This was partially a result of lower food costs as a percentage of revenue and increased efficiency in operations.

Comparable-restaurant sales, or comps, for stores open at least 21 months, increased 3.2% year-over-year, contributing to 20 consecutive quarters of comps growth. The results were driven by a 3.9% increase in average ticket prices.

Consistent growth in annual comps seem to be the norm for Chuy's since its IPO with the metric improving at a healthy pace. 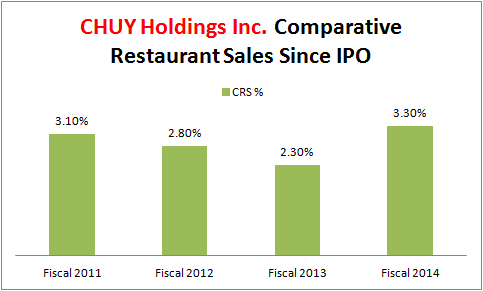 Chuy's plans to build on this momentum by consistently providing an attractive value proposition for customers -- the ideal combination of quality and great tasting food at affordable prices. As of December 2014, the average check per customer is about $13.71, which sits at the lower end of its casual dining peer group.

Domestic growth opportunities
At last count, there are only 64 restaurants in 14 states with nearly 50% of the locations in Texas. Management believes there is a long runway ahead for domestic growth and expects to increase its restaurant base by 20% annually over the next five years. New restaurants are opened strategically in both established markets and adjacent to them, where they have already proven to be successful.

The new restaurant developments are set to consist primarily of conversions of existing structures. As per the annual report, costs for these conversions are about $2 million to $2.2 million on average. One growth strategy Chuy's takes pride in is its profitable unit economics, targeting cash-on-cash returns of 30% beginning in the third operating year of new locations and a sales to investment ratio of 1.9:1. In layman's terms, the sales to investment ratio calculates how many dollars of annual sales a location can expect to generate for every dollar of invested capital.

For fiscal 2015, the company has opened a total of five restaurants so far and confirms it is on track to open 10 to 11 total new locations this year.

Couple of things to keep an eye on
Trading at nearly 38 times expected 2015 earnings, the valuation appears pricey. That represents a significant premium, even to industry peers such as Texas Roadhouse (27 times), Buffalo Wild Wings (34 times), and The Cheesecake Factory (23 times).

While it can be argued that Chuy's has won this premium due to its significant growth potential, I would personally like to see the stock trade a bit lower before starting or adding to a position.

Another important item to note is that the most recent quarterly report indicates that comps were offset by a 0.7% decrease in average weekly customers. This doesn't appear to be a permanent trend, and the fact that the company benefited from higher ticket prices and higher net income during the same period says a lot about Chuy's loyal customer following. Nonetheless, I always like to keep an eye on certain metrics to ensure no significant headwinds are forming, and this is one to watch.

The bottom line
I like Chuy's concept of authentic Tex-Mex cuisine and its strong customer base. The company is being strategic about its expansion plans and has no debt to speak of as it moves toward further growth. Mexican food is loved by many, and it appears Chuy's has the ingredients to continue offering investors solid returns. How much of that potential is already baked into the valuation, however, remains to be seen.