There's a new game-changing drink option now available for certain Starbucks (NASDAQ:SBUX) fans. In addition to indulgences like whipped cream and cookie-crumble toppings, you can add the ultimate luxurious customization option to your order: "Deliver it to my door, please."

This week, Starbucks started taking coffee and food orders directly to its caffeine-craving customers as part of a service it calls "green apron delivery."

Small start, big finish
It's just a test for now -- and a very small one at that. Starbucks is currently delivering only to a population of 12,000 office workers across the 75 floors of New York's Empire State building. Tourists and other visitors to the site can't even try out the delivery service.

But don't let that tiny beginning fool you. This initiative ranks near the top of the company's long-term expansion ideas. "We remain convinced of the huge demand for Starbucks delivery to your home or office," CEO Howard Schultz told investors in a recent earnings conference call.

Executives' confidence in delivery has been boosted by their recent happy experience with mobile ordering. Implementing the online-purchasing option brought such an immediate boost to customer satisfaction, throughput, sales, and profitability, that Starbucks brought it nationwide in record time.

After piloting at just a few locations in Portland, followed by Seattle, followed by the entire Pacific Northwest in early 2015, the company poured cash into rolling mobile ordering out nationally in time for this year's holiday season crush. "We've spent the money and taken the cost to do that because we know we have a winner and it's running ahead of our expectations," Chief Financial Officer Scott Maw said in an investors' conference last month.

Solving a great problem to have
Starbucks' new small-store format, which it is also testing in a single location in New York City, looks like a winner, too. That 538 square-foot space focuses on catering to Wall Street crowds, and executives say it has been handling volumes that they'd expect to see out of a store three times its size.

The delivery service is aiming to answer the same problem that mobile ordering and smaller stores both hope to tackle: Processing record demand for Starbucks products without hurting the customer experience.

The company last quarter posted a 4% rise in shopper traffic, which translated into 23 million more customers served, or 25 added visits at each cafe. That's great news for the business, which booked a record $4.9 billion of revenue last quarter. But at some point, all of those traffic gains will start to overwhelm baristas, leading to longer lines and lost sales. Plus, if there's significant unmet demand out there, as the early results of these initiatives suggest, then why not try to satisfy it?

The delivery path ahead
The test is next scheduled to hit Seattle, where Starbucks has partnered with delivery service Postmates. From there, assuming the pilots go well, coffee fans can expect delivery regions to expand, beginning in the densest urban environments before growing out of city centers. 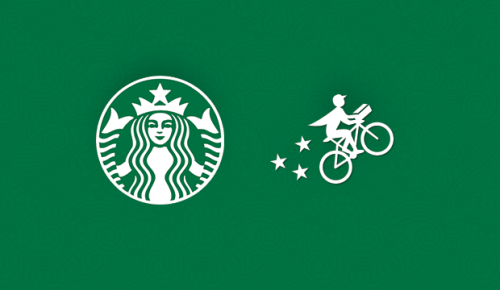 Starbucks is partnering with Postmates to deliver its products in Seattle starting soon. Source: Postmates.

As it expands, the company will probably choose a mix of the two approaches it's testing this year -- using its own employees in some cases, while partnering with established delivery services in others. Either way, it's likely that you'll soon have the option to not only bypass the line, but skip the entire visit to a Starbucks cafe while still enjoying your lavishly customized triple, venti, half sweet, not-fat, caramel macchiato.