Please ensure Javascript is enabled for purposes of website accessibility
Log In Help Join The Motley Fool
Free Article Join Over 1 Million Premium Members And Get More In-Depth Stock Guidance and Research
By Matthew Frankel, CFP® - Oct 16, 2015 at 9:10AM

Despite the recent data, we're still a long way off from the pre-crisis days.

According to the latest data, the number of people tapping into their home equity with cash out refinance mortgages is growing rapidly. This may conjure up fears of another housing crash, but there's no need to worry -- it's a lot different this time around.

Lots of people are using their equity
According to Black Knight Financial Services, cash out refinance mortgages are up 68% from this time in 2014, and are at their highest volume in five years. The average cash out refinancing results in the homeowner putting $65,000 in their pocket.

There are a few reasons for this. First of all, interest rates are extremely low right now and are forecast to rise in the coming years. The national average 30-year mortgage rate is just 3.76% as of this writing, and people are understandably tempted to take advantage of these historically borrowing costs.

On top of this, since home prices have risen by 30% over the past three years, there is more home equity to tap into. The average borrower has $19,000 more in equity than just a year ago, and total home equity has grown by about $1 trillion. 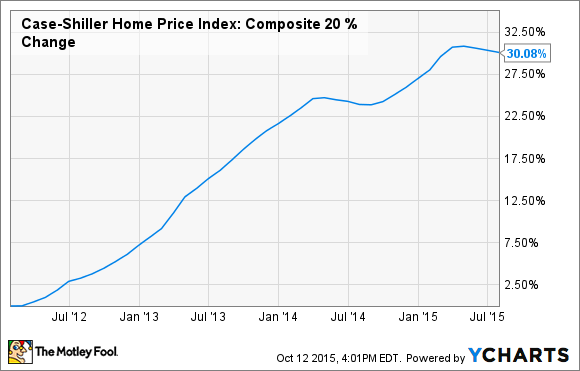 But it's not 2006 all over again
At first, this may sound alarming. After all, the habit of people using their homes like ATMs was a major factor that led to the mortgage crisis in the first place. According to the National Bureau of Economic Research, only 3% of U.S. homes would have had negative equity by the end of 2008 if there had been no cash-out refinancing -- far less than the 18% that actually were underwater.

Yet, there are a couple of big differences to point out. First, the volume of cash out refinancing is well below its pre-crisis peak, even after the recent boom. According to Freddie Mac, $84 billion in cash out refinancing was processed at the peak in the second quarter of 2006, not even in the ballpark of the second quarter of 2015's $11.4 billion.

Second, the people refinancing their homes have much more equity than during the pre-crisis years. Even after taking cash out of their homes, the average borrower still has a loan-to-value (LTV) ratio of 68%, meaning that they still have 32% equity in their homes. Before the crisis, lenders would process cash out refinance mortgages even if they resulted in a LTV of 100%, or more in some cases.

Here's when to worry
The point is that there is no immediate reason to worry about a repeat of the mortgage crisis. However, this is definitely a situation to keep an eye on -- the challenge is to maintain a healthy mortgage market where people have access to the credit they need, without entering the realm of irresponsible lending that we've seen in the past.

Having said that, there are a few warning signs to watch out for. I mentioned that even after taking cash out, the average refinancer still has plenty of equity in their home, which is a sign of healthy lending. Most lenders won't allow cash-out refinancing, which results in a loan-to-value ratio that's greater than 80%. So, if we see high-LTV cash-out refinancing making a comeback, it could be a cause for alarm.

Additionally, it seems like people are using their equity for responsible purchases, such as home improvements. In fact, one study predicts that home remodeling will rise by 10% next year. On the other hand, reports of using home equity to purchase luxury items (think boats or high-end cars) could be a sign that history is repeating itself.

For now, however, it appears that the cash-out refinancing boom is a healthy one, and if it continues, could actually help the U.S. economy.