These top stocks for 2015 should keep making you money for years. Source: DeviantArt user 2bgr8stock.

Both the S&P 500 and Dow Jones Industrials are in the negative so far this year following what has been a strong bull run by the stock market during the past few years. But even in a relatively flat market, there have been a handful of great performers. This year's list of top stocks for 2015 includes Amazon.com (NASDAQ:AMZN), BofI Holding, (NYSE:AX), and Under Armour, (NYSE:UAA): 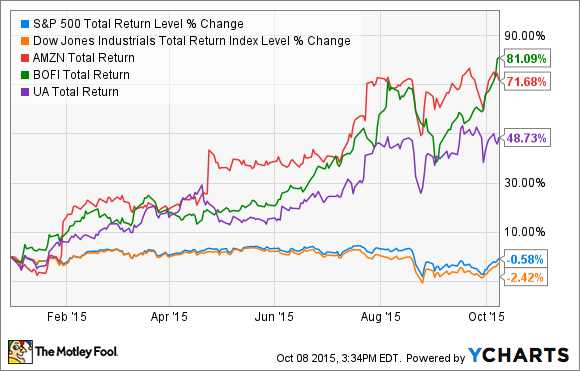 While plenty of traders may be selling now, taking profits on the amazing gains in these stocks so far this year, there's a lot of reason for long-term investors to hold onto their shares for years ahead. Let's take a closer look at what makes these top stocks for 2015 worthy long-term investments.

The common thread: Disrupting the status quo
While web retailer Amazon, Internet bank BofI Holding, and athletic-apparel maker Under Armour may seem to have very little in common, they all share a key thread as to why they have been fantastic investments so far. All three started out as outsiders -- and to some degree remain that way -- building a business based on disrupting much larger and entrenched players, and bringing something better to the table.

For Amazon, which is now far beyond its roots as just a bookseller, the idea of making it easy and convenient to buy nearly everything online has turned it into one of the largest and most powerful retailers in America. BofI Holding has similarly brought a much lower-cost way of banking to millions of users, many of whom may never need to step foot in a traditional brick and mortar banks. Under Armour's business started with a simple t-shirt that offered better comfort for athletes versus the old standard cotton, and quickly grew from there into dozens of products across nearly as many categories.

What makes their recent successes sustainable
The easiest thing for investors to do when you get such huge returns in a relatively short period of time is to sell, and capture those gains before the market falls and takes them back. But the problem with that way of investing is how shortsighted it can be.

Sure, 50% or 80% returns in less than a year is amazing; but there's no effective way to regularly reproduce those results. The reality is, the majority of the most successful investors don't build their wealth on short-term moves, but through deliberate, long-term investing in great companies that are set for continued growth. 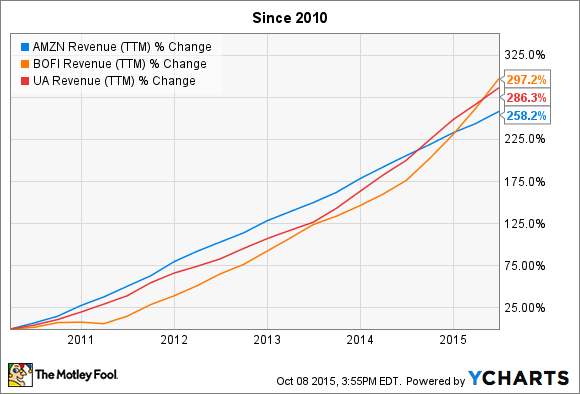 And that's a big part of what makes these three companies worth holding for the long term. Not only have they grown sharply during the past few years, but they're still growing. And compared to some of the largest players in their respective industries, these companies are still relatively small.

For instance, Amazon's annual sales are still only about 20% of retail giant Wal-Mart, while Nike does 10 times the sales of Under Armour. BofI Holding is an absolute drop in the bucket of banking, with something like 1/300th the revenue of banking behemoth Wells Fargo & Co. during the past 12 months.

Short-term risks and thinking big picture
Like all investments, these three top stocks aren't risk free. All three trade at premium valuations to their peers on most measures, including price to earnings for Amazon and Under Armour: 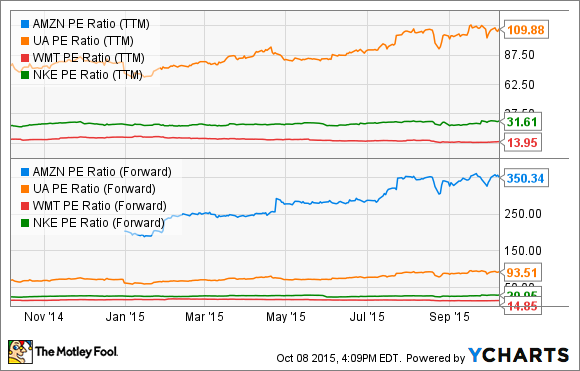 And price to book value for Bank of Internet: 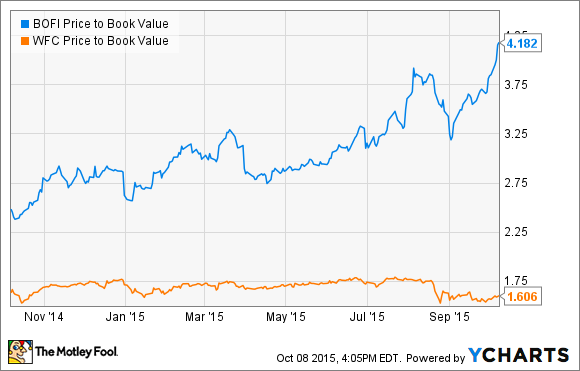 As BofI Holding and Amazon investors learned in 2014, sometimes even top stocks and fast-growing companies don't make for great investments over short periods of time: 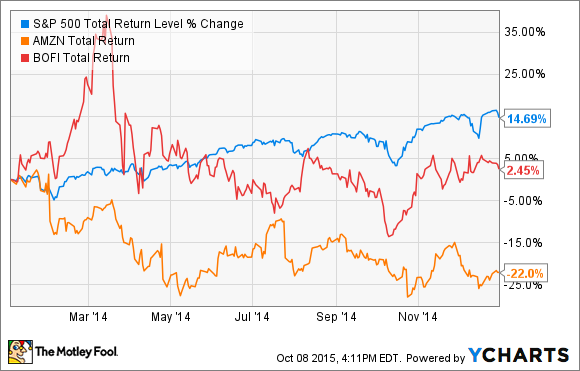 Furthermore, there's always the risk of the inevitable market correction, or the impact of recession in the future, which may hurt the performance of these three companies. This would likely lead to poor stock returns. In other words, these probably aren't good investments if you're dealing with money that you'll count on in the next few years. Simply put, there's no way to predict these short-term risks and the impact they could have on your returns.

But if you're investing money for retirement and retirement is years or even decades away, then these are three companies that -- even after great runs in 2015 -- have decades of market-beating growth ahead of them.

Top Stocks for 2015: Why These 3 Winners Should Keep Winning for Years to Come @themotleyfool #stocks $AMZN $UAA $AX Next Article
Current