The Internet of Things will soon power California, and your state may be next

New opportunities for the Internet of Things, or IoT, are growing exponentially. Don't believe it? Just think of how many times you've recently heard the word "smart" to describe a new product. But that's not the only area where you'll find the IoT gaining traction. Applications for it are growing in the energy sector as well.

California sees the value of developing "smart" solutions. The Golden State, with the SunSpec Alliance, recently launched a $4 million project to "investigate the application of interoperable smart inverters, solar PV, and storage to enhance grid stability and enable higher penetration of Distributed Energy Resources." The study is a vital step in meeting the state mandate of requiring all new solar and battery projects to incorporate smart inverters starting in 2016. Updating the power grid infrastructure has been a long-neglected concern across the nation. In 2013, the World Economic Forum released its Global Competitiveness Report, emphasizing the importance of a reliable power grid -- one that provides "electricity supplies that are free from interruptions and shortages so that businesses and factories can work unimpeded." According the report, the United States ranked 30th among 148 global economies.

Not your granddaddy's power grid
Solar panels continue to cover rooftops across California, and as more come online, utilities are struggling to manage the additional power that these systems are contributing to the grid. But that's not the only challenge. California has a mandate to develop 1.3 GW worth of energy storage for its three investor-owned utilities by 2020. All of this translates to a power grid that requires significant updating, and the state envisions smart inverters as playing a crucial role in effecting that change. Participating in the study are are two leaders in the inverter market: Enphase Energy ( ENPH 3.75% ) and SolarEdge ( SEDG 1.69% ) .

Though primarily known for its microinverters, Enphase is exhibiting some optionality in expanding operations to include IoT functionality. Earlier in September, the company announced that it is partnering with AT&T to provide its customers with the company's new Envoy-S gateway. According to the company, the solution "features consumption monitoring, revenue-grade metering, integrated Wi-Fi and flexible networking options, and optional AT&T cellular connectivity via AT&T's Internet of Things technology."

The Envoy-S is an important addition to Enphase's offerings, essentially creating a mini ecosystem. This is further validation of the company's interest in bringing the IoT into future homes. Following an announcement earlier in the year, Enphase now offers customers the ability to integrate their solar data with the Nest thermostat to enhance their systems' performance. Provided by Alphabet's (NASDAQ: GOOG) Google, the Nest thermostat "learns" the temperature preferences of homeowners and changes it accordingly, among other things.

Like Enphase, SolarEdge offers customers smart inverters. According to the company, its StorEdge solution serves as a traditional DC-optimized PV inverter, but it also offers the capability to monitor and manage solar energy and battery storage. Customers also have the option of hooking the system up to SolarEdge's Electricity Meter, which provides "production/consumption readings for traditional on-grid applications such as export limitation demand response and peak shaving, and time of use shifting."

The smart-inverter offerings provide both companies the ability to stay ahead of their peers -- it's not uncommon for the top dogs in the semiconductor market to fall. It also offers the chance to further improve on their top lines. Both Enphase and SolarEdge reported impressive revenue improvements in their quarters ending June 30. Enphase reported $102.1 million, growth of 25% year over year; SolarEdge reported $98.4 million, growth of 144% year over year.

Home, smart home
Using 50 customers to test smart homes using solar PV, a smart inverter, a residential battery, and a smart thermostat, SolarCity ( SCTY.DL ) is another participant in the study. The 50 will be connected on their own circuit, of which SolarCity will monitor and manage. Recognizing the long-term value in leading this market, SolarCity is contributing its own funds to the project. As reported in an article with Greentech Media, Ryan Hanley, senior director of grid operations for SolarCity, said the company is "cost-sharing more than we're getting from the grant -- we're putting up more in R&D and program support than we're receiving." This project adds to significant rises in research and development. For the recently reported second quarter, the company's R&D spending quadrupled year over year, growing to $12.4 million from $3.0 million for the same period last year. It also translates to a larger portion of operating expenses as a whole. For Q2 2015, research and development accounted for 7.1% of operating expenses -- more than twice than the 3.1% it represented in Q4 2014. 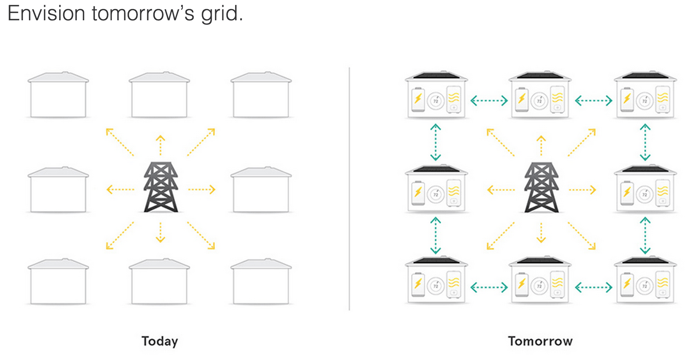 SolarCity's grid of the future starkly contrasts that of today  Source: SolarCity.

The takeaway
California has been at the forefront of developing renewable-energy resources, and this study is another example of how the state recognizes the importance of bringing its grid into the 21st century. In time, other states will surely follow suit, and those companies that have experience in bringing the Internet of Things to California's grid will have a clear competitive advantage over their peers. Investors may not see revenue growth based on these new offerings in the near future, but Fools are in it for the long haul. And though this story may take time to materialize, it surely will -- the aging power grid demands it.