There are a lot of factors that contribute to the cost of living -- housing costs, taxes, healthcare, transportation, and utilities all play a role, just to name a few. And, cost of living can vary widely between states. Here are the five cheapest states to live in, and a little bit about why each one made the list, as well as how cost of living is calculated.

The cost of living index

Simply put, a state's cost of living index is a way of comparing how much basic living expenses such as housing, healthcare, and utilities in a certain state compares to the United States as a whole. An index score of 100 represents the national average, while a score of more or less indicates a higher or lower cost of living, respectively. And, there are subcategories such as housing, groceries, and utilities that are individually indexed as well. For example, Mississippi's housing index of 71.0 implies that the average person in Mississippi pays 71% of the national average housing cost.

The cost of living index data used here was published by the Council for Community and Economic Research (C2ER) and is current as of the second quarter of 2015. 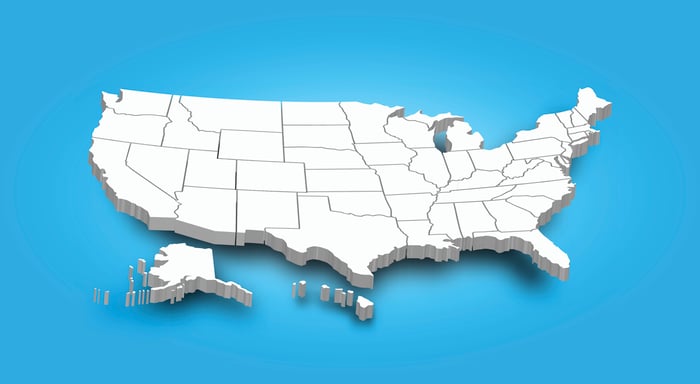 5. Alabama (Overall cost of living index: 89.9)
Alabama is the fifth cheapest state to live in, but it has the lowest healthcare costs in the nation. Not only is Alabama's median home value nearly 33% less than the national average, but the state's real estate property taxes are the second lowest in the U.S.

4. Idaho (89.3)
Although Idaho's median home price of $170,200 is the highest of the five states on this list by a wide margin, residents enjoy low expenses in other areas. For example, Idaho has below-average real estate, income, and sales taxes, and its grocery and utility costs are among the cheapest. It's also worth noting that Idaho's median household income is $53,438, which is just below the national average -- so Idaho residents get paid well and enjoy a low cost of living.

3. Kentucky (89.1)
Even though Kentucky ranks highest in the nation for income taxes, the state has a lower-than-average cost of living in every single category. The state is tied for the cheapest grocery costs, and its median rent of $1,000 is less than two-thirds of the national average.

2. Indiana (88.1)
Indiana has a median home value of $113,300 and median rent of just $975 per month. The state also has a median household income of $48,060, which actually creates the most favorable income-to-housing cost ratio on this list.

1. Mississippi (84.3)
Mississippi is the clear winner in the cost-of-living rankings, with the lowest housing costs, cheapest utilities, and lowest transportation costs. Mississippi's median home value of $112,200 is 38% lower than the national average, and healthcare and grocery costs are also well below average. However, Mississippi's average household income of $35,521 is the lowest on this list by a considerable margin.

The other end of the spectrum
What this data means is that residents of these states pay between 84% and 90% of the national average for their living expenses. On the other hand, there are some places in the U.S. that have extremely high costs of living, usually due to one or two major factors. For example, with a cost of living index of 166.9, Hawaii is the most expensive place to live in the U.S., and the indexes for both housing and utilities are over 200 -- meaning rent and electric bills are more than twice as expensive as the U.S. average. Other expensive places to live include Washington, D.C. (147.6), Massachusetts (139.9), and New York (134.3).

My point is that moving from a high cost of living area to a low one can be quite a dramatic difference. For example, an average family moving from Washington, D.C. to Indiana can expect to save a staggering 70% on their housing expenses.

Cost of living isn't the whole story
While these states are the cheapest to live in, bear in mind that this is just one side of the story. Specifically, a low cost of living is only as good as how much money you make where you live, as well as intangible factors such as your overall happiness living there. So, while cost of living is definitely an important factor to consider when deciding where you want to live, it's not the only thing you should think about.