This past quarter, Schlumberger's (NYSE:SLB) results weren't anything to write home about. It beat Wall Street expectations ever so slightly, but that was the best thing that came out of it. For those who try to read into Schlumberger's early earnings to see what it could mean for the rest of the oil service sector, there were a couple of trends that might not be the news that Halliburton (NYSE:HAL) or its acquisition target Baker Hughes (NYSE:BHI) want to hear. Let's look at what Schlumberger's earnings will mean for others in the space.

Regional diversity has its benefits
Looking at the big numbers for Schlumberger, it's easy to think that this quarter wasn't too bad. Revenue came in a little below exceptions, but operational cost cuts helped to make up the difference, as it was able to eke out a slight earnings beat.

What really helped the company keep its earnings afloat, though, was its exposure to the international markets, notably the Middle East and Asia. These regions of the world haven't seen the extreme declines in activity, because, for the most part, Schlumberger operates on long-term contracts that encompass several services. Compare that with its North American earnings, which have declined 76% as rig counts continue to fall and short-term contract rates are getting smaller. 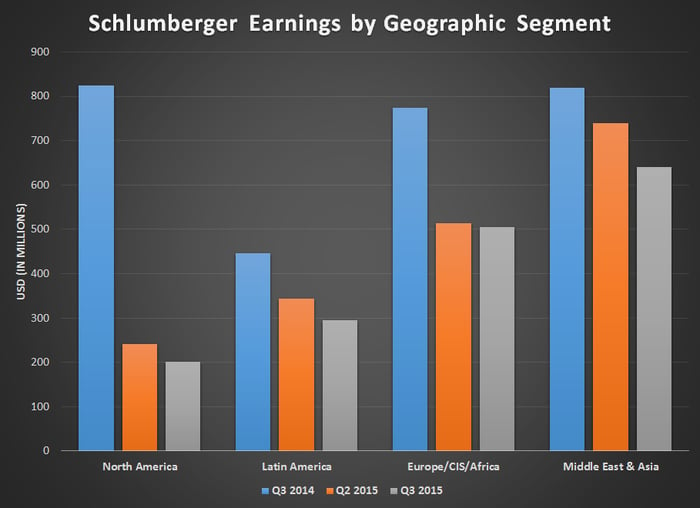 One important note is that even during better times, no single market for Schlumberger made up more than one-third of total profits.

Now let's compare that with the geographic earnings breakdown of Halliburton and Baker Hughes from last quarter: 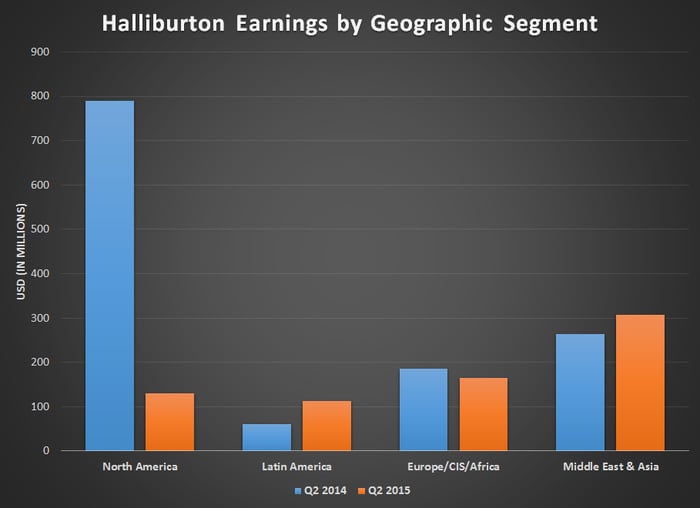 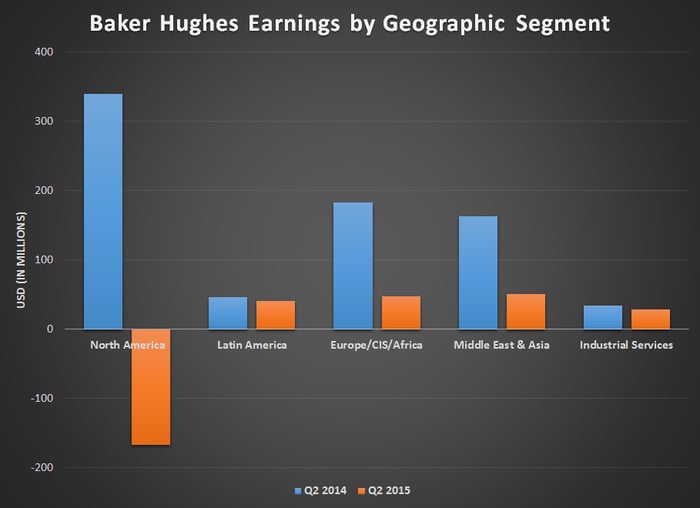 Now, things like this can cut both ways. When oil and gas activity starts to pick back up again in North America, Halliburton and Baker Hughes will see outsized returns compared with Schlumberger. Based on comments from Schlumberger CEO Pall Kibsgaard, though, that activity pick-up may be further down the road than originally thought. In his opinion, the lack of cash flow from producers will lead to even smaller capital expenditure budgets in 2016, and his company is preparing to downsize even further to adjust to the size of the market.

Doubling down on America
Another aspect that could make this even more challenging for Halliburton and Baker Hughes is that, as part of its proposed merger, the two companies recently announced that it was selling additional business segments to get regulator approval. The proposed business segments generated about $5.2 billion in revenue in 2013, and a large component of those sales is from outside North America.

This would make the combined company even more exposed to the North American market. It may not be a bad move to leverage to this market, since there is a lot of promise in American shale, Canadian oil, and the reopening of the Mexican market. It does, however, expose the company to a market that has been shown to swing up and down to greater extremes with the prices of oil.

What a Fool believes
It's no secret that North American drilling activity has been the one to bear the brunt oil's price decline. The motley crew of independent producers make snap budget decisions that can shut down its spending in a matter of weeks. Based on the results from Schlumberger, the declines in rig count, and the fact that both Halliburton and Baker Hughes are tied closer to the North American market, this quarter could be very rough for the two companies. If this continues for as long as Schlumberger's management foresees, investors in Halliburton and Baker Hughes may want to strap in for a rough 2016.