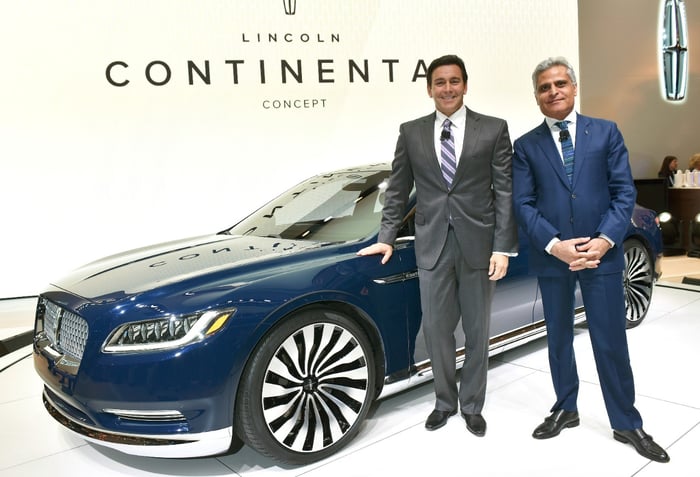 Ford CEO Mark Fields and Lincoln chief Kumar Galhotra with the Lincoln Continental Concept in New York in April. Ford will show off a production version of the Continental in January, according to reports. Image source: Ford Motor Company

It, or something a lot like it, is headed for production. And we may see that production version as soon as January.

Car and Driver is reporting that Ford (NYSE:F) will unveil the production version of the Lincoln Continental in Detroit early next year.

What will it be like? And why is it so important to Ford?

The Lincoln Continental Concept was a show-stealer

Your humble Fool got a close-up look at the Lincoln Continental concept car in New York last spring, with none other than Ford CEO Mark Fields pointing out the car's highlights.

The most important thing I can tell you is that photos don't really do the Continental concept justice. The car's design isn't especially flashy, but it has tremendous presence. It was the car that all of the jaded journalists at the New York show wanted to see.

It's long and low, with old-school proportions. Inside, it's old-school plush, with thick seat cushions and limousine-like legroom in the back seat. But it's also completely up-to-date, with plenty of high-tech features.

Up close, the Continental Concept's length and low stance are striking. It's not a subtle car. Image source: Ford Motor Company

Sometimes, concept cars are flights of fancy, a way for a company to show off potential future technology, or for designers to show an evolving line of thought. But sometimes, a concept car is a preview of something the automaker intends to build.

Some bits of the Continental concept were probably just for show: the outrageous chrome wheels, for instance, and the champagne cooler between the reclining rear seats.

If the production version does follow the concept closely, then the new Continentals are going to get a lot of attention.

The new Continental is an alternative to the Germans
The new Lincoln Continental is likely to arrive at U.S. dealers about a year from now as a 2017 model. It's expected to replace Lincoln's long-in-the-tooth MKS sedan.

The Continental will probably be all-wheel-drive, though it's possible that Lincoln will offer a front-wheel-drive version as a base model.

Either way, it won't be a hot rod Lincoln. Lincoln chief Kumar Galhotra told me back in April that the brand was aiming at "quiet luxury", something very different from the sporting emphasis of the big three German luxury brands. The Continental (and future Lincolns) will emphasize comfort, silence, and high-tech luxury over performance.

That, and the Continential's huge and plush back-seat area, should play very well in China.

Luxury-car buyers in China often hire drivers to deal with the intense traffic around major cities like Beijing, while the owners ride in the back seat. The Continental seems practically made for that mission. That's not a coincidence.

The 2017 Continental is key to Lincoln's plans in China
The brand's recent ad campaigns have slowly started to change its image. But many Americans still tend to think of Lincoln as a maker of airport limos.

It's very different in China. Galhotra said that Ford's market research had shown that Chinese customers associate the Lincoln brand with movie stars and President John F. Kennedy. They hold the Lincoln brand in very high regard -- and Ford has calibrated its pitch for Lincoln in China to that image.

Lincoln's dealerships in China are opulent showcases with an extraordinary emphasis on customer service. The new Continental seems pitched to give those dealerships a car that fits in with Chinese perceptions of the Lincoln brand.

That will help boost the entire Lincoln brand in China. And because Lincolns can be sold with fatter profit margins than Ford, a boost for Lincoln will help boost Ford's overall profits even as China's once-hot market cools off.

The upshot: A different take on "luxury sedan"
Investors have watched with interest as General Motors (NYSE:GM) has put big money and big effort behind a revival of its Cadillac brand. Cadillac chief Johan de Nysschen has made no secret of his goal: To beat the German luxury brands at their own game.

His boss, CEO Mary Barra, has her own goal: To make Cadillac a significant source of profits for GM. That's why Barra signed off on a major investment in Cadillac, and a lot of independence for de Nysschen.

Ford's ambitions for Lincoln, and its planned $2.5 billion investment in the brand, aren't quite so dramatic. Instead of reinventing itself as a maker of taut sports sedans, Lincoln almost seems to be going back to the best of its history with a big silent cruiser of a luxury sedan.

It's an incremental change, but it should still give Ford's profits a solid boost. The new Continental seems a sure bet to improve on the sales (and profits) of the old MKS it will replace in the United States. It also seems well-pitched to succeed in China, assuming that the production version follows the concept closely.

It's a more modest plan than Cadillac's. But it could turn out to be a solidly profitable one for Ford, one that could help push Ford's overall profit margins a bit higher over the next few years. We'll know more when we see the production version of the new Continental, hopefully in January.

Editor's note: A previous version of this article stated that the Lincoln MKZ is also made at the Flat Rock plant. The Fool regrets the error.