MannKind (NASDAQ:MNKD) is perhaps the king of all biotech battleground stocks. Bulls believe the company's inhaled insulin product, Afrezza, will eventually become a megablockbuster product. On the other hand, bears point to Afrezza's tepid launch, which generated a mere $3.3. million in sales in the first half of the year, as evidence that the drug is fast becoming a commercial flop.

Complicating matters, MannKind is struggling with a mountain of debt that it was forced to accumulate to complete Afrezza's clinical program. At last count, for example, this tiny biotech sported a total debt-to-capital ratio of 184%, according to data from S&P Capital IQ.

In short, MannKind's long-term financial solvency is in doubt. That's why the company has been trying to convince some of its debt holders to accept shares to settle a portion of the outstanding balance, as well as slashing its operating costs by laying off workers.

MannKind's long-term outlook is further muddled by the fact that its marketing partner, Sanofi (NASDAQ:SNY), has an option to terminate its agreement regarding Afrezza's commercialization as early as next year.

With all these red flags screaming, "Danger, Will Robinson!" investors might be wise to avoid this battleground stock altogether. Yet the bulls may still have their day in the sun. So let's take a closer look at what both sides are thinking.

Wall Street is divided over Afrezza's long-term commercial potential
While there is little debate that Afrezza's evolving reimbursement status with payers, along with the required lung function test, has been a formidable obstacle to the drug's commercial uptake so far, MannKind and some of Afrezza's real-life users think the product can gain traction over the long haul. And that's where the story takes an interesting turn. 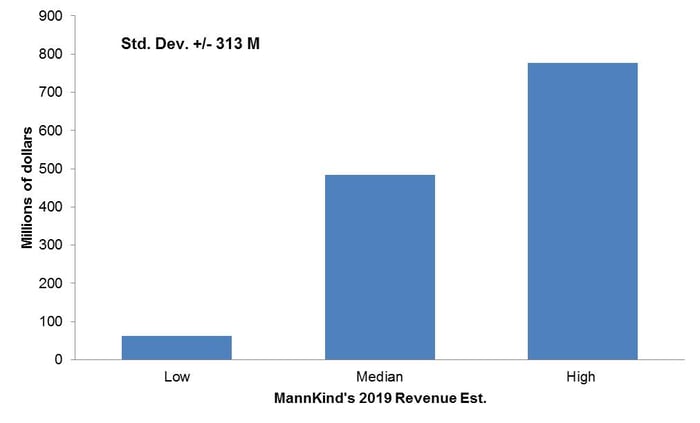 On the low end, Piper Jaffray analyst Joshua Schimmer has MannKind's 2019 revenue pegged around $64 million, justifying his bearish stance by citing the difficulty of using Afrezza and the treatment's trouble appealing to mainly needle-phobic patients.

Griffin Securities' Keith Markey, by contrast, is far more bullish on Afrezza's commercial potential, suggesting that the drug could help generate up to $776 million in revenue for MannKind by 2019. Markey's stance appears to stem from his belief that reimbursement issues will eventually subside and that demand will grow substantially as Sanofi's marketing efforts pay off.

Depending on which extreme view is right, MannKind is either trading at a whopping 20 times, or less than two times, its 2019 revenue right now. Perhaps what we can learn from these oceans-apart revenue estimates is that analyst estimates shouldn't factor into your investment decisions.

Is MannKind dirt-cheap or grossly overpriced?
I know this is the question bulls and bears are desperately fighting over right now, so I wish I could offer some kind of compelling insight into this issue. But truthfully, I don't know -- and this appears to be the Street's position as well.

Personally, I'm playing it safe with this stock right now because of the outstanding debt issues and slow commercial uptake of Afrezza. But I do see why some investors are so passionate about MannKind. If MannKind can put these debt issues to bed without wiping out its entire cash position, and Sanofi decides to stick around for the long term, then there's a real chance this stock could double or even triple from its current levels after all.

My gut feeling is that Afrezza's real commercial potential won't be known until year three or four. By then, most diabetics who are Afrezza candidates should be generally aware of its existence and will probably have made up their minds on whether to use it or not. So the key will be whether MannKind can overcome these short-term headwinds to truly test Afrezza's commercial prowess.

That's why investors need to keep a close eye on Afrezza's sales for the remainder of the year. If sales don't begin to accelerate in a big way heading into 2016, I think the chances that Sanofi exits this partnership in 2016 will only grow larger, perhaps spelling doom for this tiny biotech and its inhaled insulin product. A vote of confidence by the French pharma giant next year, however, could be a major catalyst for MannKind's shares. Stay tuned.