Spirit Airlines (NYSE:SAVE) stock has been a nightmare for investors all year. The stock took its latest dive on Friday, falling 15%, after an investor update suggested that pricing will remain weak for the foreseeable future. Shares ended the week down a full 50% from the all-time high reached in late 2014. 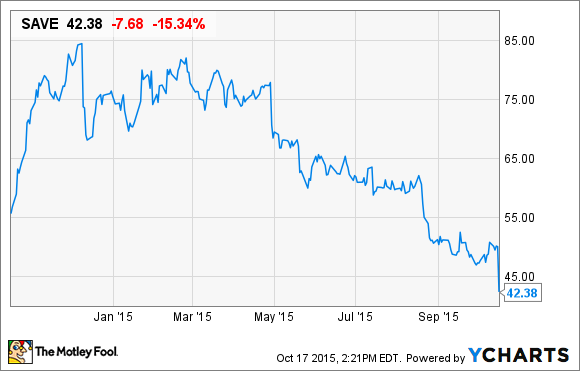 The ironic thing is that there is nothing fundamentally wrong with Spirit's business model. The company is on pace to post double-digit profit growth this year, and is likely to do so again in 2016. That makes the stock a steal at less than 11 times current-year earnings.

Unit revenue continues its steep fall
Almost every major U.S. airline has suffered a significant decline in unit revenue this year. For example, unit revenue fell 6.9% year over year at American Airlines (NASDAQ:AAL) in Q2, and the company has projected a similar decline for Q3.

However, the biggest declines by far have come at Spirit Airlines. Spirit's unit revenue fell 12.5% year over year in the first half of 2015. Management suggested on the company's July conference call that the declines will get even steeper in Q3.

Sure enough, Spirit's updated third-quarter guidance issued on Thursday implies that unit revenue declined about 17% to 18% last quarter. Worse yet, the company stated that because of low prices in the markets Spirit serves, unit revenue will fall even faster in Q4.

This weak revenue forecast induced analysts at Morgan Stanley to downgrade Spirit Airlines stock to "equal-weight." The brokerage thinks Spirit's profit margin will fall more in line with the industry average for the foreseeable future, making the stock less attractive.

Profitability remains stellar
What makes the 15% drop in Spirit Airlines somewhat surprising is that the company maintained its full-year margin guidance. The company still expects to produce a 21.5% to 23% operating margin this year, up significantly from 19.2% in 2014.

That wasn't comforting to investors, though, because Spirit Airlines increased its third-quarter margin guidance -- implying that fourth-quarter profitability would be lower than previously expected. In fact, if Spirit's guidance is accurate, it could post a rare year-over-year drop in earnings in Q4. That would also cast doubt on its earnings growth prospects for 2016.

On the other hand, it's also possible that Spirit's Q4 guidance is overly bleak. It's too early to generate a very precise forecast of holiday season performance right now -- and the carrier has underestimated its own earnings potential many times in the past few years.

Spirit's model is built to last
To be conservative, let's suppose that Spirit's forecast is accurate and earnings will be flat or down slightly year over year in Q4. Even that prospect shouldn't keep long-term investors up at night -- because Spirit Airlines' industry-leading cost structure represents a massive, enduring competitive advantage.

Spirit estimates that American Airlines' unit costs are 57% higher than its own on a stage-length adjusted basis. This gap is growing wider as Spirit reduces its cost structure through growth and the addition of larger A321 aircraft to its fleet.

It's hard to see how it can afford to compete on price with Spirit in the long run, given the latter's dramatically lower costs. This was the conclusion of analysts at Evercore ISI, who recently recommended that Spirit should "stand its ground" against American.

As Spirit's growth rate moderates next year, it will provide some initial relief from the company's unit revenue challenges. When American Airlines eventually looks to stem its own revenue declines, the competitive environment facing Spirit should improve dramatically.

In the meantime, Spirit's low -- and falling -- unit costs will enable it to maintain a healthy profit margin while continuing to grow at a 15%-20% annual rate. This is hardly the picture of a company whose stock should be on the discount rack. As a result, in the next few weeks, I will be looking to pick up some more Spirit Airlines stock, especially if it falls any further.