Energy infrastructure giant Kinder Morgan ( KMI 0.06% ) reported its third-quarter results after markets closed on Wednesday. While the results were in line with muted expectations, the company's confidence in its ability to attain its robust dividend-growth target rate is starting to weaken.

Kinder Morgan reported distributable cash flow of $1.1 billion, or $0.51 per share. That amount matched the company's declared dividend, which it just raised by $0.02 per share, to $0.51 per share, keeping the company on track to meet its full-year target to declare $2.00 per share in dividends. However, it also resulted in a distribution coverage ratio of 1.0 times, which was razor thin -- though it's what we were expecting to see this quarter after CFO Kimberly Dang warned on the second-quarter conference call that dividend coverage in the "third quarter will be tight."

Still, it's a solid result, especially in light of the continued weakness in the oil market, which put pressure on the company's carbon dioxide segment. That segment, along with its Canadian segment, both weighed on results this quarter, which is evident from the following chart. 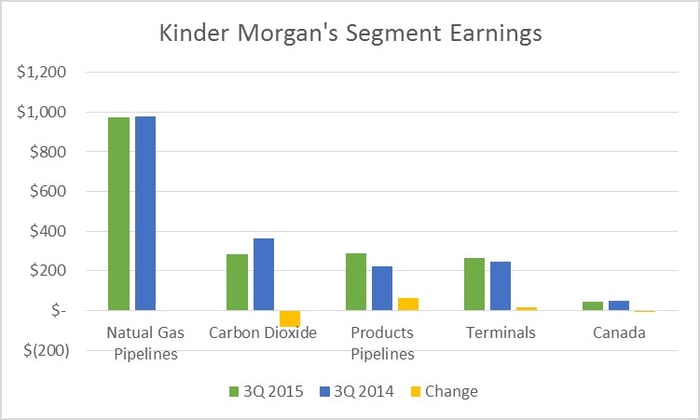 For the quarter, earnings in the company's carbon dioxide and Canadian segments fell 22% and 16%, respectively, over the the third quarter of last year. And thanks to these two laggards, combined segment earnings fell 1% year over year.

The only real star during the quarter was the company's products pipeline segment, which enjoyed a 29% year-over-year increase in segment earnings thanks to strong volumes and new project start-ups. That result, along with flat earnings from its natural gas pipelines segment and low-single-digit growth in terminals earnings, helped offset most, but certainly not all, of the weakness in the company's carbon dioxide and Canada segments, the latter being affected by the weak Canadian dollar.

Two big changes to the outlook
Because of the continued weakness in commodity prices, Kinder Morgan made two very noteworthy changes to its outlook. First, and foremost, it is no longer completely confident that it will be able to achieve 10% annual dividend growth through 2020. This is after the company slightly shifted the near-term outlook by projecting 6%-10% dividend growth for 2016. That's not to say that it won't hit the high-end of that target, or accelerate growth in the latter years, but it's a noteworthy change.

Further, in providing a range, Founder Richard Kinder believes that it "will provide the flexibility for us to meet our dividend and have excess cash coverage." So, it's a prudent move, even if it's a bit of a disappointment.

The other notable change the company is making is to its backlog. After the end of the second quarter, Kinder Morgan's backlog of commercially secured future projects stood at $22 billion. However, after placing $400 million in projects into service during the third quarter, and pulling another $1 billion in projects out of its carbon dioxide segment due to low oil prices, the backlog will shrink by a net $700 million after it only added $700 million in new projects during that quarter. That puts the backlog at $21.3 billion, which, while still a strong number, isn't the result we were hoping to see.

An acquisition to keep an eye on
While Kinder Morgan's backlog provides a lot of visibility for its future growth, it's not the company's only lever to pull to drive growth. We saw that second lever on display earlier this week when the company announced that it had signed a joint venture agreement with BP ( BP -0.14% ). Under the terms of that agreement Kinder Morgan will pay BP $350 million for a 75% stake in a company that will own 14 refined products terminals and related infrastructure.

Further, Kinder Morgan is acquiring a 15th terminal that it will own outside of the joint venture. In securing this partnership with BP, Kinder Morgan will boost near-term cash flow via the acquired terminals, as well as from new terminals that the partners develop in the years ahead. Acquisitions such as this provide an added boost to Kinder Morgan's cash flow in addition to the projects it builds via its backlog. Further, acquisitions, in general, could be the key to the company's ability to meet or even exceed its targeted dividend growth rate.

Investor takeaway
Operationally, Kinder Morgan's quarter was about as expected after the company's distributable cash flow was just enough to match its recently increased dividend. Looking ahead, however, the company is starting to grow less confident in its near-term ability to grow the dividend at as fast a pace as it had been projecting. That's certainly a caution flag that investors will need to keep a close eye on, given how confident the company had been on its ability to achieve that robust growth rate.