Apple (NASDAQ:AAPL) Music has not quite made all other streaming services irrelevant, but early results suggest it might.

CEO Tim Cook revealed that the subscription-based service, which offers a huge catalogue of songs, has 6.5 million paying subscribers. He made the announcement at at WSJDLive, The Wall Street Journal's global technology conference. In addition to the number of people who had actually converted from a free trial subscription to paying $9.99 for an individual plan or $14.99 for a family membership, another 8.5 million people are currently on three-month trials. 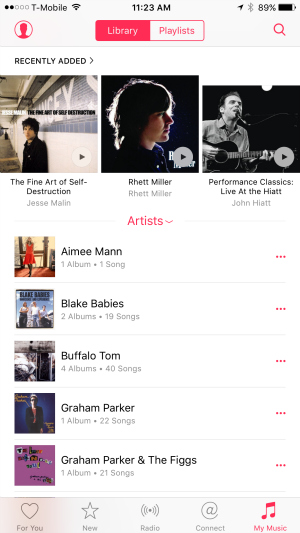 How well is Apple converting?
While Spotify has a free, ad-supported version of its service as well as a paid product that allows consumers much more choice in what they hear, Apple only has a paid option. It has however allowed customers to sample the product by offering a free three-month trial.

That has proven to be a very successful model. It's hard to pinpoint an exact conversion rate because Apple offers the free three month trial on a rolling basis for new users. Since conversion is the total amount of free users who become paying customers and Apple has not released that info, just where it stands now, the exact conversion rate is unknown, but very healthy.

The number however lies somewhere between the current ratio of 6.5 million paid to 8.5 million free trial users and the 11 million trial customers Apple Senior Vice President Eddy Cue said the company had in August, about two months after the service launched (and before paying was even an options. That puts the conversion rate at a number topping 40%.

It's a stunning number, but it makes sense when you consider that the company is not offering a free, ad-supported choice. Spotify customers may prefer the paid service to the free version, but the option to get something for nothing creates a much bigger barrier to opening up your wallet. The same logic applies to Pandora (NYSE:P), which offers an ad-free version of its personalized radio service for $4.99 a month.

Pandora might ultimately be the company most hurt by Apple Music because in addition to offering the ability to listen to whatever you want, the company is also offering curated playlists and an actual radio station. Apple even offers its own Beats 1 radio station and a selection of radio offerings which  while not exactly like Pandora's song selection engine, could be considered a reasonable facsimile.

Apple probably won't crush Pandora's audience, but it could make less people willing to pay for its premium service.

Did people just forget?
Richard Windsor, an analyst at Edison Investment Research, told USA Today that 6.5 million paying subscribers is worth annual revenues of $780 million for Apple. He also noted one possible reason that the number might not be as good as it appears to be.

"How many users have forgotten to cancel the service and will do so after the first month when they receive the bill is unclear," he said. "Either way, this is pretty good performance and implies that around 60% of users who trial the service go on to pay for it."

Windsor is right that a certain percentage of users simply had their free subscriptions convert into paying ones, and seeing the bill will cause some to cancel. That number, however, should be small, and the company should benefit from the same thing that drives people to keep paying for gym memberships they don't use. Apple Music is a good value, and many of those who don't use it but pay for it (myself included) will keep paying because they really should start taking advantage of it.

The biggest sign of success
Maintaining a high conversion rate will be hard, but if Apple can convert 40% of the 8.5 million people currently using the free trial then that's another 3.4 million over the next less-than-90 days who will become paying users. If the company can keep the trial users coming, it can keep adding to the converts -- and there is no reason to believe it can't, with nearly 95 million iPhones in use in the Unites States alone as of May, 2015, according to a study from Consumer Intelligence Research Partners.

That numbers might even be larger now if the launch of the iPhone 6s added new customers rather than simply converting older ones (and there's reason to believe it did given aggressive pricing plans from Sprint and T-Mobile designed to get customers to switch). Apple, which has a credit card on file for the majority of its phone, tablet, and Mac users, should be able to keep the trial pipeline filled, and if anywhere near 50% to 60% of users convert, the company should quickly overtake Spotify.

Apple Music is a pretty good product (with some interface challenges), but its integration into the company's hardware make it an easy choice for anyone using an iPhone, iPad, or a Mac. These early numbers suggest that it may take some time, but the path to being the market leader is clear, with all the other players in the space likely to fall by the wayside.