Please ensure Javascript is enabled for purposes of website accessibility
Log In Help Join The Motley Fool
Free Article Join Over 1 Million Premium Members And Get More In-Depth Stock Guidance and Research
By Andrew Tonner - Oct 23, 2015 at 8:43AM

Once unthinkable, it appears even software giant Microsoft (MSFT 1.07%) can indeed change its ways. After bungling any semblance of a mobile strategy, Microsoft, under the shrewd leadership of CEO Satya Nadella, is finally adapting to a world where Windows is no longer the dominant computing operating system.

The implications are farther-reaching than this piece can succinctly capture, but for the first time in memory, Microsoft finally enjoys software and hardware capable of competing with mobile powers like Apple (AAPL 1.62%). In light of Microsoft's hardware update earlier this month, could Microsoft actually derail one of Apple's least talked about growth drivers this holiday quarter?

Microsoft's shiny new toy
At its pre-holiday season launch event earlier this month, Microsoft launched three new Lumia smartphones, an updated Surface tablet, an updated Band wearable, and a host of other hardware. However, it was Microsoft's new laptop -- the Surface Book -- that truly stole the show, and for good reason.

In the weeks since, numerous respected tech publications have gushed that Microsoft finally got what so many of its Windows OEM licensees have gotten wrong for so long by embracing several of Apple's winning hardware ways. Rather than competing on cost, which one could fairly argue has lead to a "race to the bottom" mentality in notebooks, Microsoft opted to create a notebook that users would actually want to use.

Perhaps the most defining feature of the Surface Book, and sign of genuine innovation on the hardware front, is the hinge that connects the screen/tablet to the keyboard. This unique connector allows a user to insert and remove the tablet screen with ease, while also providing ample strength and support when used in laptop mode.

Also, rather than scrimp on battery power and quality track pads like many of its Windows OEM counterparts, Microsoft seems to have finally realized that the most practical way to succeed in a PC market whose best days are likely behind it is to win through quality. This begs the question: will the Surface Book help derail Apple's ongoing Mac renaissance?

Microsoft attacks the Mac
It appears that Microsoft, in trying to overcome its increasing irrelevance in mobile, took a queue from computer science legend Alan Kay, who said, "People who are really serious about software should make their own hardware." And Apple investors certainly should be worried that Microsoft seems to have finally developed a device strategy capable of producing hit products.

Although the iPhone will remain Apple's primary financial driver for the foreseeable future, Apple's Mac business has quietly enjoyed a consistent, if not moderate, two-year expansion. 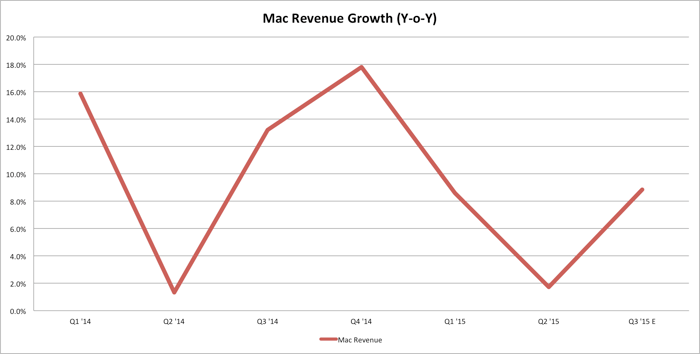 In the context of Apple's overall business, such growth might seem easily dismissible. However, in the context of a PC market that continues to contract, Apple's success in consistently growing its computer division is nearly a black swan. And that's why the great experiment that is Microsoft's Surface Book will be so fascinating to watch in the coming holiday quarter.

On one hand, Apple's highly integrated ecosystem, ardent brand loyalty, and massive installed base of iPhone and iPad owners should help insulate it from competitive pressure. However, with few real threats to its Mac lineup before now, this theory hasn't necessarily been tested in a head-to-head sense in recent years.

And Microsoft, for its part, is doing everything it can to turn up the pressure on Apple. It recently added the Surface Book to its "Easy Trade Up" Windows 10 incentive plan. Now, new purchasers of Surface Books who trade-in their old laptops will receive a $200 credit toward their purchase. However, Microsoft will bump up the rebate value to $300 for any Surface Book users that switches from one of Apple's MacBooks.

With the first of Microsoft's Surface Books set to arrive to consumers on October 26th, it's certainly too early to tell just how meaningful a threat the Surface Book presents to Apple. However, this will be an important and telling subplot amid the increased competition between Apple and a suddenly device-focused Microsoft.