Ouch. Shares of Pandora Media (P) have been utterly decimated, down by as much as 40% at the low, following a dismal earnings release. While revenue put up a seemingly impressive 30% increase to $311.6 million, the company's losses completely exploded. We're talking about $85.9 million in red ink, or $0.40 per share, which is quite a bit worse than the $2 million net loss a year ago.

To be fair, most of this loss can be explained by a one-time settlement that Pandora negotiated with the record labels during the quarter. Pandora has agreed to a $90 million settlement related to using songs created before 1972. This is the primary reason why content acquisition costs skyrocketed in the third quarter. Pandora is recording the charge now, paying $60 million this month, and paying the rest in installments throughout next year.

Worse yet, Apple (AAPL 1.62%) launched its new Apple Music streaming service right as the quarter started, which does make the sequential comparisons that much more potent.

Bleeding users
Monthly active listeners inched 2% higher to 78.1 million, while listener hours increased 3% to 5.14 billion. But those are year-over-year comparisons that Pandora is citing, and a sequential comparison is likely more relevant at this point considering the launch of Apple Music. Pandora saw a huge spike in listeners in Q4 2014, which the company attributed to seasonality. (People like streaming Christmas music but who wants to actually buy it?)

But Pandora has now given back much of those gains, and it lost 1.3 million active listeners sequentially. 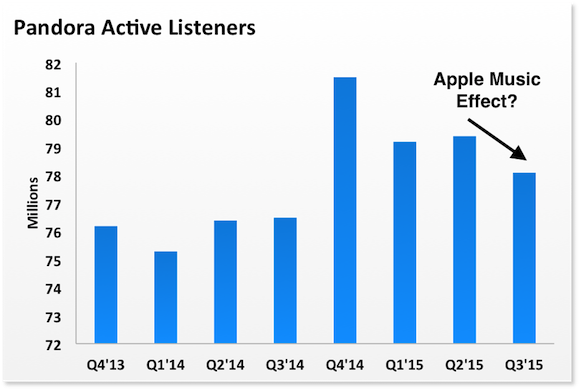 On the call, CEO Brian McAndrews acknowledged that Apple Music's launch, combined with promotional moves by other players, put a dent in user growth. This was entirely expected, and McAndrews had previously warned about this on the July call. Management still believes that Apple Music's overall impact will be "short-term" in nature. McAndrews even goes as far as to say the impact thus far has been pretty comparable to when Apple first launched iTunes Radio in 2013, which didn't really take off in a sustained way.

Only time will tell
Pandora is certainly right that this is a marathon, not a sprint. The true test will be whether or not Apple Music can put ongoing pressure on Pandora's user base beyond one quarter full of promotional activity and aggressive marketing campaigns.

We do know that Apple Music currently has 6.5 million paid subscribers and 8.5 million users still on the free trial. That's already a lot more paid subscribers than Pandora has, since the vast majority of its users opt for the free ad-supported version that is currently the bane of the music industry.

But Pandora's guidance also left a bit to be desired. Revenue in the fourth quarter is expected to be in the range of $325 million to $330 million, while the Street was expecting the company to bring in over $350 million in the coming quarter.

A Foolish confession
I must confess, I'm a little biased. I've never liked Pandora. In fact, one of the very first articles that I ever wrote for Fool.com explained why I would never buy the music streamer. Call it confirmation bias if you like, but I really just don't like this business.