Downgraded! Consumer Reports this week withdrew its recommendation of Tesla's Model S, saying that its data now shows that the acclaimed electric luxury sedan is too unreliable to recommend. Image source: Tesla Motors

Shares of Tesla Motors (NASDAQ:TSLA) took a nosedive this week after a downgrade from a surprising source: Consumer Reports.

The venerable consumer's advocate has long been one of Tesla's biggest fans. It called the Model S the best car it had ever tested, giving the automaker a hugely important stamp of approval at a key moment in the company's life.

But this past week, it downgraded the Model S. The magazine's reviewers still love the car. But it now has enough data to assess the Model S' reliability, and it's not good enough for the car to maintain its "Recommended" status.

That news took a big bite out of Tesla's share price, as you can see. 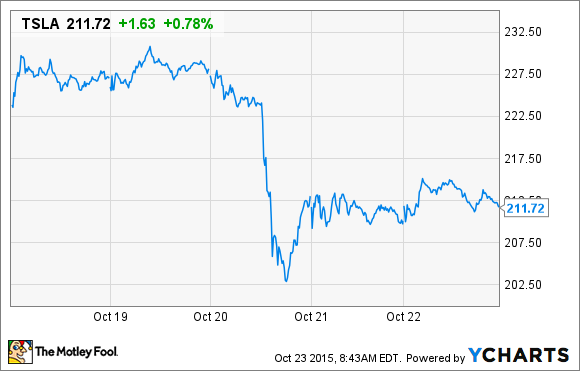 But what does the news really mean for Tesla? Three auto-minded Fools offer their views below.

John Rosevear
Here's what we have learned: It's really hard to build a car to global standards of reliability and performance at a profit.

It's no surprise that Tesla might not be there yet. (It has done well to get this far.) But I think -- and I have been saying this for several years now -- that many Tesla investors underestimate both the incumbent automakers and the challenges involved in manufacturing cars. Manufacturing is the real "moat" of the auto business.

Consumer Reports did a lot to make the Model S a credible entry in its early days. But I don't think this downgrade will have the same kind of impact, at least in the near term. It's unlikely to make a big dent in Tesla's sales of the Model S. Most buyers who can afford a vehicle at the price point of the Model S (and now, Model X) have the resources to have something else to drive if the Silicon Valley hot rod lets them down. And I think it's still true that most Tesla buyers are early-adopter types, willing to put up with some glitches in order to get the latest technology. Tesla's still-strong customer-satisfaction ratings bear that out.

But it's one thing to sell a six-figure car that isn't as reliable as a Toyota. (Ferrari sales don't seem to suffer from reliability concerns.) It's another thing entirely when you're trying to compete directly with Toyota -- or with BMW (OTC:BAMXF).

The problem is that that's where Tesla is going. More to the point, it's what Tesla's still-sky-high valuation hinges on: The proposition that the company will be able to enter the automotive mass market with its upcoming Model 3 and generate sales in the hundreds of thousands (or more) per year. It's no secret that Tesla is aiming the Model 3 at the territory occupied by compact luxury-sports sedans like BMW's vaunted 3 Series.

The 3 Series isn't (yet) a battery-electric car, but other big automakers like General Motors and Volkswagen are expected to have credible battery-electric competitors on the market by the time the Model 3 arrives, or soon after. GM and VW know how to manufacture a reliable car (electric or otherwise) at an affordable price and still make a profit. If it wants to be more than a niche player, Tesla will have to be able to do the same. Right now, for all of its robots and big claims and high-tech sheen, it's not clear that it can. That doesn't seem to trouble most Tesla investors, but it should.

Travis Hoium
Consumer Reports single-handedly crushed Tesla Motors' stock on Tuesday, but does it really mean anything to the company long-term? The answer is yes, but it may not be in the way you assume.

Short-term, I don't think Tesla will feel any backlash from a poor reliability rating from Consumer Reports. There are too many fanboys of Tesla to cancel Model S or Model X orders en masse, especially in the small quantities they're going to be produced at in the next few years.

What the report brings up is how incredibly hard it is to build a reliable car and how difficult it is to do it in a timely, cost-effective manner. The Model X, for example, is already about two years behind schedule and may be setting itself up for reliability issues of its own. Those falcon-wing doors? Really cool, but if they were easy to mass-produce, someone would have done it by now.

For Tesla Motors' operations, this may be a sign that development expenses could be higher than expected, warranty costs could be on the rise, and consumer skepticism could be coming just as Tesla is trying to hit the mass market.

The true challenge will be seen when the Model 3 is released, sometime in the next two to five years. Tesla has indicated that it will sell the Model 3 starting for about $35,000, a price that would compete with many conventional vehicles today, and will be making them by the hundreds of thousands. But if Tesla can't make a $100,000 car that doesn't have "squeak, rattles, and leaks" as Consumer Reports is stating, how can we expect Tesla to make hundreds of thousands of Model 3s for a low price and high quality? And if the average consumer walks in with a skeptical eye to begin with, it could lead to disappointing mass adoption of the Model 3.

Investors shouldn't jump ship just because Consumer Reports gave Tesla a bad rating, but it should highlight the risks the company faces in becoming a global automaker. Making cars is hard, and Tesla may not be as far ahead of its global competitors as Elon Musk and Wall Street would have you think. In fact, Tesla Motors hasn't yet proven that it's a high-quality manufacturer at all, and that should worry any shareholder.

Daniel Miller
How quickly things change: Consumer Reports flip-flopped on Tesla's Model S reliability faster than you could flip your pillow to the cool side. While I think Consumer Reports removing Tesla's Model S from its "recommended" list is a big deal, part of me really wants to play devil's advocate; there's certainly a case to be made in that regard.

For instance, the most common complaint -- though there were some more serious one -- was overall squeaks and rattles annoying drivers of the Model S. However, as one person noted to Consumer Reports, "The car is so very silent when driving that minor squeaks and rattles that you wouldn't be able to hear in a gasoline engine car become very annoying."

If you're willing to pay $70,000 for a fully electric vehicle that, in some trims, can beat high-end sports cars in a quarter-mile race and your largest complaint is noise, because the car's ride is so quiet without a combustion engine, I think you'll be satisfied with your purchase overall.

That sentiment seems to be felt among Tesla Model S consumers -- albeit, with consumers mostly being early adopters, and more strongly pro Tesla, at this point. "Despite the problems, our data show that Tesla owner satisfaction is still very high: Ninety-seven percent of owners said they would definitely buy their car again," said Consumer Reports.

While Tesla has essentially brushed off the the downgrade, a large amount of uncertainty remains. The truth is, we don't fully know how well these Model S vehicles hold up over time. The Model S went into production in 2012, and in the historic time frame of the automotive industry, the vehicle is just barely due for a midcycle refresh.

Sure, it's a concern that reliability issues are beginning to pop up with the Model S, but at this point it's not a big deal because Tesla's customer service is second to none, early adopters are willing to deal with the small issues (and the automaker could fix reliability issues before its vehicles go mainstream), and ultimately people still want to buy Tesla's Model S regardless of the downgrade. The biggest problem here is that investors are so easily spooked.