Please ensure Javascript is enabled for purposes of website accessibility
Log In Help Join The Motley Fool
Free Article Join Over 1 Million Premium Members And Get More In-Depth Stock Guidance and Research
By Brian Stoffel - Oct 26, 2015 at 6:26AM

Wrong question. The more important one: When do you want to retire?

Figuring out how much to save for retirement can be a confusing process. Let's make it a little easier.

It's the golden question in financial circles: How much does one need to save for retirement? Some people say even $1 million isn't enough. I think that's ridiculous; those people have serious spending issues . But the average American over 65 has about $175,000 in savings, according to Vanguard, and I think that's too little, as it provides just $7,000 a year for living expenses.

There are so many variables that factor into the decision that it's maddening: the size of your family, where you live, your level of consumption, future medical needs. The list goes on and on.

So what is the average American to do about this conundrum?

A simple, counter-intuitive, ballpark solution
Motivated by a blog post from Mr. Money Mustache -- a man named Pete who retired comfortably at the age of 30 without ever earning a seven-figure salary -- I created what I consider to be a great guide for how much you should save.

But there's a caveat: You first have to decide when you want to retire.

This is a question you don't often hear asked -- most people assume that retirement happens sometime between age 60 and 70. It's an empowering question to consider, as it opens up to most people, for the first time, to the possibility of retiring early.

Once you pick an age out, the rest is relatively easy. The graph below shows the number of years until retirement, based on the percentage of your income that you are able to save and invest every year. It's important to note a few assumptions baked into this:

As you can see, if you are somehow able to sock away 65% of your income, you'll be able to retire in just 10 years. If, on the other hand, you stick to the standard 10% to 15% plan, you're looking at anywhere from 35 to 60 years until retirement.

If an average American starts working full-time at age 22, and retires at the age of 62, putting away 10% to 15% should get them to their goal -- especially after Social Security is added in.

But what if you've already done a good job of saving? How can you figure out how much more you should put away? The good people at networthify.com have got us covered. Simply input your numbers (notice that annual income is after taxes) and voilà -- you can see how long you have until you're set for retirement. 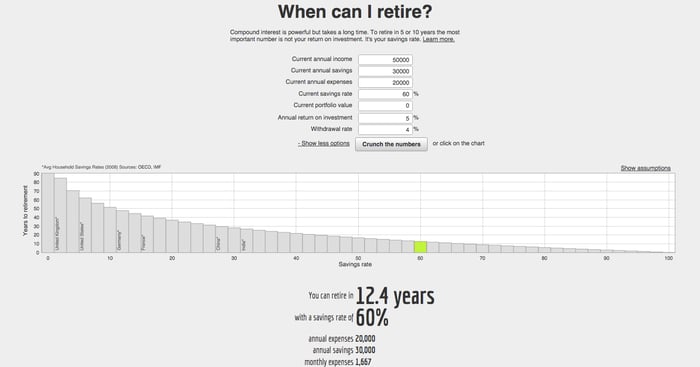 Play around with your household expenses and you can see the direct connection between your spending and the amount of time it will take you to build a big enough retirement account.

In the end, the sooner you get started on this, the better -- regardless of when you want your Golden Years to start.