Three of the biggest and most important companies in the solar industry report earnings later this week and what they say will give us an indication of where the industry is heading. SolarCity (NASDAQ: SCTY) will give indications of growth and cost reductions in residential solar, First Solar (NASDAQ:FSLR) will tell us how utility scale projects are selling, and SunPower (NASDAQ:SPWR) is a barometer for the entire industry's health.

Here are the biggest factors to watch and listen for later this week.

What Wall Street expects
We don't put a lot of faith in Wall Street's expectations each quarter, but an earnings beat or miss can move a stock dramatically short-term, so it's good to know what Wall Street is expecting. Below I've outlined what analysts are expecting from SolarCity, SunPower, and First Solar for revenue and earnings per share.

Those numbers are important, but here's what to look for beyond the headlines.

Can SolarCity continue to cut costs?
When SolarCity reported earnings for the second quarter one of the disappointments was the company's current cost trajectory. Cost per watt fell $0.10 from a year earlier to $2.91 per watt, but has actually gone up slightly since Q3 2013. 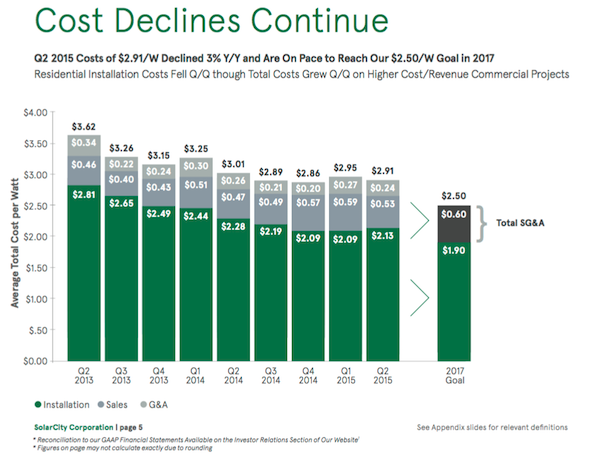 There's a lot that goes into cost per watt, like project timing and seasonality, but the key for SolarCity to remain competitive when the investment tax credit drops in 2017 is to keep cost reductions coming. Will Q3 be another leap forward or a step backward?

I'll also be watching for SolarCity's growth plans in the future. The company has been doubling installations every year and plans to install as much as 1.0 GW in 2015. But that investment takes a tremendous amount of operating expense. To hit 2017 cost targets it needs to slow growth spending, so a slower rate of planned growth in the future would be a prudent plan given the current uncertainty in the future of residential solar.

On top of improving technology, I'd like to see if First Solar can continue to report a solid profit that tops margins competitors are achieving. 2015 guidance calls for 21% to 22% gross margin and $3.30 to $3.60 per share in earnings so any improvements on those levels would be welcome for investors.

Can SunPower take back its efficiency lead?
SunPower has long been the manufacturer of the most efficient solar panels in the world, a title that was (sort of) stolen by SolarCity. Its new panel won't be in full production until at least 2017, so it isn't a real threat to SunPower yet, but it puts a target on the company's products.

Third quarter earnings may not be a time to release a new product but early in November the company is holding an analyst day, when we could see a 23% efficient solar panel. Progress in that direction would be welcome for investors in the next couple of weeks.

Financially, analysts are expecting a loss in the third quarter, primarily because revenue recognition from projects sold to the yieldco 8point3 Energy Partners won't hit until the fourth quarter, when analysts are expecting $1.37 per share in earnings. What I'll be looking for is solid margins on the products it is installing and improving margins in commercial solar, which has been a drag recently. A newly released product called Helix could help the commercial space, but we may not see an impact until 2016.

Growth is another factor to watch for. A 350 MW capacity expansion should be ramping up and when combined with concentrator projects being built in China we should see SunPower become more of a growth company than it's been for years. If that comes to fruition it would certainly help investor confidence.

More to come
It's a big week in the solar industry and with changes happening faster than any other part of energy it's worth watching what leading companies are up to. Check back to fool.com for more coverage as solar industry earnings season unfolds.