In a showdown of social-media stalwarts, one tech specialist puts Facebook and LinkedIn under the microscope to see which growth stock offers investors the more compelling opportunity today.

Although today's largest social-media sites are seared into our consciousness, many of the best-known brands, including Facebook (FB -5.12%), Twitter, and LinkedIn (LNKD.DL), are still in the early phases of building out their multibillion-dollar business models.

As we Fools prefer to invest for the long term, waiting for great business models to take root can make a huge difference toward saving for a successful retirement. Good things take time, and Facebook and LinkedIn are no exceptions. However, recently, the market has treated the two very differently. 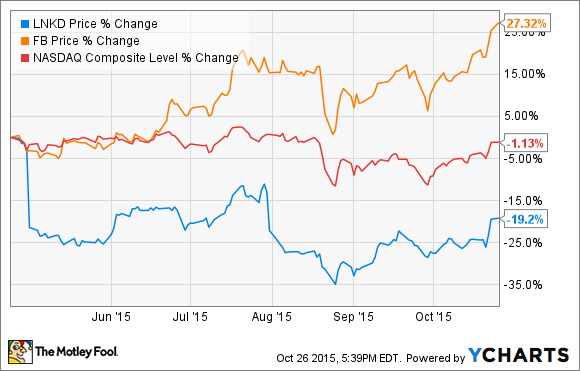 So which of these high-flying social-media stocks presents investors with the greater opportunity today? Let's take a look.

Bull thesis: Facebook
Although more expensive by a number of measures, Facebook enjoys one of the most compelling long-term growth opportunities in all of tech. Here's the case in favor of Facebook over LinkedIn as I see it.

For starters, the more general nature of Facebook's social networking -- that is, casual, as opposed to professional -- allows the company to cater to a larger audience and potentially create greater opportunities to monetize that audience. Although a bit dated, eMarketer data from last November helps illustrate this dynamic:

This difference affects the scope of both companies' overall business opportunities in a few ways. For starters, Facebook's larger appeal has helped draw more users onto its platform. For comparison's sake, Facebook tallied a massive 1.5 billion monthly active users during its most recent quarterly reports, versus a still-impressive, but hardly comparable, 380 million for LinkedIn.

Furthermore, its more general nature not only lets Facebook cater to a larger audience, but it also allows the company to create a more diverse set of potential monetization points for that audience. Two recent examples are Facebook's introduction of its Instant Articles publishing platform and its experiments with adding e-commerce functionality to its digital storefronts. In essence, Facebook is increasing advertising revenue by creating new ways to keep users on its platform. And beyond opportunities within its core platform, Facebook is probably developing search functionality that could make it an inevitable challenger to Google's stranglehold on the global search market. Growth drivers, upon growth drivers, upon growth drivers. That's what Facebook has.

Bull thesis: LinkedIn
LinkedIn is no slouch. Its stock has been decimated over the past six months, but I think its investment thesis rests on buying strength at a time of weakness.

Much of the drag on LinkedIn's stock price stems from its past two earnings releases, but the pessimism may be overblown. In its latest report, LinkedIn raised its full-year guidance by 1.2%. A number of sell-side analysts derided the move because, after accounting for its acquisition of lynda.com, the revision lowered LinkedIn's core outlook by a mere $10 million.

However, the change accounts for an infinitesimal 0.3% drop in guidance. And even after this minute adjustment, LinkedIn is still projecting 28% year-over-year growth for core operations in LinkedIn's 2015 fiscal year. We aren't seeing the headier growth rates from past years, but this change isn't pernicious enough to trigger a mass exodus from LinkedIn's stock.

However, myopic investors have always created opportunities for committed long-term investors, and LinkedIn could be the latest. Although smaller than Facebook in terms of users, something that's unlikely to change, LinkedIn dominates the professional side of social networking. And LinkedIn has created an interesting three-pronged business model that allows it to monetize its user base in a number of ways throughout the job-search and hiring process. LinkedIn is expected to finally scale to full-time profitability next year. And although it needs to continue to grow its user base and how effectively it monetizes the same, LinkedIn's virtual lock on an area of our increasingly digital lives positions the company to thrive over the long term.

Winner (by a hair): Facebook
Both companies enjoy fantastic business models and dominate their respective portions of the social-media landscape. These are two fantastic growth stocks with meaningful future runways. But if I have to pick one name, I'll argue that Facebook enjoys a broader set of opportunities, both now and in the future.

To me, the potential to pivot into other massive high-margin areas of tech, most notably search, gives Facebook a more expansive long-term economic opportunity, which is what tips the scale in its favor today. So while Facebook wins this matchup of social-media darlings, tech investors would do well to consider both names when constructing their portfolios.