Editor's note: A previous version of this article incorrectly stated that the Proteus Digital Health sensor dissolves, but the sensor passes through the body.

Let's be clear about one thing: the Internet of Everything is one of the most transformational technological movements of our time. But if you're hesitant to believe that, I don't blame you.

Many articles about the Internet of Everything (or IoE for short) offer up examples of smart refrigerators that order more milk when they sense we're running low. At best, some of these IoE examples seem frivolous, and at worst they miss the point of the Internet of Everything, which is to connect and automate the things around us in order to truly transform how we live.

This is only the beginning. Source: Apple.

Apple's wearable device takes a formerly unconnected thing (a watch!), connects it to the Internet (through Wi-Fi or paired with the iPhone) and gives you the ability to track how far you've run, how many steps you've walked, or how long you've been sitting. You, in turn, can take that information and make actionable decisions based on it, like walking more steps each week, running an extra mile, or simply standing up for a bit.

Obviously, the Apple Watch does far more than encourage more physical activity. But its processing power, sensors, and connectivity have permanently transformed timepieces. If you don't believe that, consider that by 2020, nearly 20% of consumers will own a smart watch, according to Acquity Group.

OK, so our watches can encourage us to get up and walk around more, so what? The point is that the Internet of Everything can collect information from nearly anything. When we put sensors and software into nearly everything around us, we can start to measure, control and analyze vast amounts of information, and improve how we interact with the world.

The agricultural industry is already knee-deep in the IoE. Sensors placed in fields can track whether or not fruit is ripe, or if there are too many bugs in an orchard. These sensors communicate with automated systems to alert the farmer that it's time to harvest a specific area of the field, or even release pheromones in a particular section of a field to trap pests and keeps them from destroying crops.

The IoE is making big improvements in agriculture out of the fields as well. A company called TempuTech uses sensors to monitor hotspots in its grain bins which can lead to the grain spoiling or catching fire. The company uses General Electric's  Predix-powered Equipment Insight software to receive real-time alerts about its equipment. The software not only notifies customers of problems, but also gathers data about the equipment and provides predictive analysis about potential problem areas.

While these are just two small examples of the Internet of Everything's impact on the agricultural industry, there are more changes on the way. A recent New York Times article said that the Internet of Everything could bring the next wave of agriculture, resulting in a shift in the industry that hasn't happened since the 1920s. "In the near future, the use of water and fertilizer will be measured and monitored in detail, sometimes on a plant-by-plant basis," the article said.

Already, more than $2 billion has been funneled into agtech companies this year, nearly the same amount as in all of 2014. And all of these agtech investments could have big payoffs down the road. By 2050, Internet of Everything technologies could boost food production by 70%, according to Beecham Research.

The Internet of Everything could improve our health
Perhaps technology transforming the way your food is grown doesn't sound like a beneficial thing. But how about if the IoE could help detect cancer in your body? Alphabet's (NASDAQ:GOOG) (NASDAQ:GOOGL) Google is working on nanoparticles that flow in a user's blood stream looking for cancer and other harmful diseases. Once they've discovered a potential threat, they travel back to a wearable tech device to present their findings.

Earlier this year, The Atlantic interviewed Andrew Conrad, the head of Google's life sciences division, to find out how the company will detect cancer using implanted technology, fake skin, and wearable devices (see video below).

But Google isn't the only one working toward Internet of Everything solutions. Proteus Digital Health has an ingestible sensor the size of a grain of sand that can be placed inside of medications and track whether or not they've been taken. The sensor is powered by stomach fluids and sends a signal to a wearable patch when the medicine has been taken, then passes through the body like a high fiber food.

Proteus says that 50% of people don't take their medications as prescribed, which then limits their effectiveness and results in $100 billion to $300 billion in unnecessary healthcare costs in the United States.

It's easy to imagine Proteus Digital's technology assisting the elderly in taking their medications, as well as alerting and informing doctors and family members of a loved one's immediate health. And these types of technology are becoming increasingly important as our population grows older. 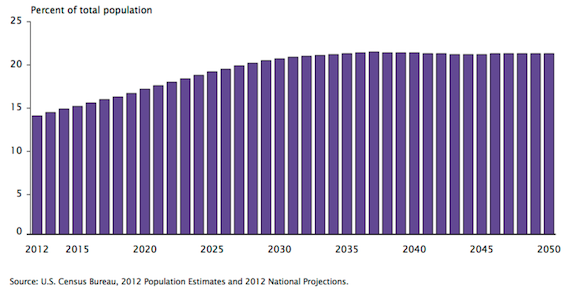 Right now, about 15% of the U.S. population is aged 65 or older, but that number will increase to 20% by 2050. Implementing the above technologies could transform our health system from a reactive process to a proactive one, just as our population is in need of such a change.

Last year, a study conducted by HP found that about 70% of connected home devices used unencrypted networks, and many of the preset passwords could be easily bypassed.

Part of the problem is that small tech companies can connect nearly any device to the Internet relatively inexpensively, without much incentive to ensure that those devices are secure when they hit the market, or remain secure into the future. While there are groups of tech companies coming together to set security standards, device security is far from universal. 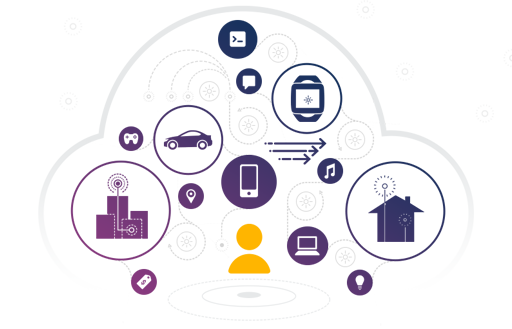 Aside from device security, the IoE poses plenty of privacy challenges as well. The U.S. Congress has already held several committee meetings on the Internet of Everything, highlighting issues with data collection and how it's used. Right now, it's still unclear who owns the data that's being collected by our devices, and how exactly companies will ensure our privacy while their IoE devices track things as private as our health.

There's no going back
There's a lot of hype surrounding the Internet of Everything, and with its potential effects touching so many industries it's no wonder why. Everyday tech companies large and small are connecting more and more devices to the Internet, and soon billions of things around us will be quietly collecting and processing data.

Just as with many other technological advancements of the past, the benefits usually outweigh the costs. And with the IoE enabling us to produce food more efficiently and improve our health, that's reason enough to keep moving forward with the Internet of Everything, even as security and privacy issues continue to be solved.