Last week, shares of Kinder Morgan (NYSE:KMI) took an uncharacteristically large drop following management's announcement that it was revising its dividend guidance down from 10% to the 6%-10% range as weakness across the energy sector has put some of its projects into question. As you can imagine, this announcement had an impact on pipeline peer Enterprise Products Partners (NYSE:EPD). 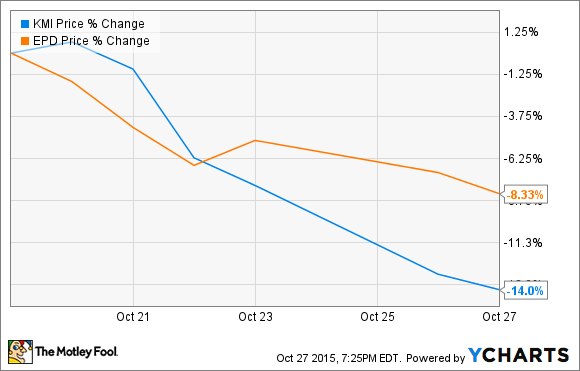 So should investors be worried that Enterprise might be in line for a similar kind of cut to the company's outlook? Let's look at some of the reasons Kinder Morgan revised its outlook and whether this is something that could also happen to Enterprise

Tight distribution coverage
Both Kinder Morgan and Enterprise have been known over the past several years for paying rather generous distribution payments. Those payments have also increased quite regularly. One notable difference between the two, though, is that Enterprise has given itself a much larger margin of error for those payouts.

Different focus
Another reason Kinder Morgan was forced to reduce its outlook is that a couple of its business segments are more tied to oil price weakness. Its carbon dioxide segment that produces oil and supplies other oil producers with CO2 for enhanced oil production saw a 22% decline compared with the same quarter last year. Even though much of that production is hedged, the overall decline in the market has reduced total demand for CO2. Also, the company's Canada segment saw a big decline as oil and gas activity related to oil sands has weakened even more than U.S. oil production.

Luckily for Enterprise, it has very little exposure to these businesses. The larger concern for Enterprise will be related to its NGL pipelines and processing segment. The company saw some declines in processing margins, as well as total processing volumes that could hit cash flow again this quarter.

What to look for
Investors in Enterprise should look to see if the decline in oil and gas activity will have an impact on the company's various pipeline segments. Many of those pipelines are secured with minimum volume commitments, but any contracts that don't have that protection could result in gross margin declines.

Another component worth checking up on is any announcements related to project plans beyond the current 2016-2017 time horizon. Part of the hit Kinder Morgan took was from the decline in its project backlog, which happened because certain projects weren't economical under current market conditions. For Enterprise to continue its streak of raising distributions every quarter, it will need to have a decent quiver of projects added to its current construction plans.

What a Fool believes
It's not beyond the realm of possibility that Enterprise Products pulls a Kinder Morgan this quarter and announces some revisions to its outlook for the next few years. The decline in oil and gas activity in the U.S. over the past year could put growth plans on hold for a lot of companies. However, the excess cash it's currently generating should give the company a little more margin of error than its peers that run a tighter budget. Enterprise reports its third-quarter earnings on Oct. 29 before the market opens and will host a conference call to discuss the results at 10:00 a.m. ET the same day.