National Oilwell Varco's (NYSE:NOV) earnings results for the third quarter were yet another reminder to investors that we're in the worst decline in the oil and gas industry since the 1980s. While the company continues to cut costs to preserve some level of profitability, the decline in capital spending from oil and gas producers is impacting just about everything the company does.

It's getting ugly out there
We're well over a year into the decline in oil prices, but based on National Oilwell Varco's numbers, we're still far from any improvement. Sales for the quarter were $1.49 billion, a 44% decline from the same quarter last year. Similarly, after excluding one-time restructuring charges, earnings per share from continuing operations declined more than 56% from this time last year to $0.77 per share. 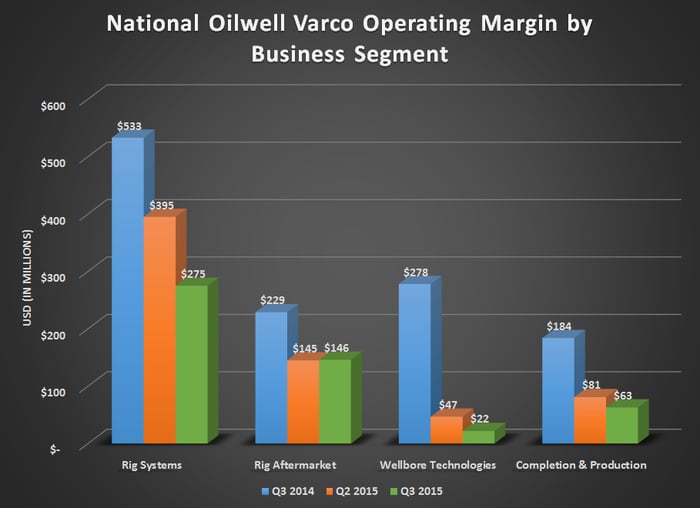 The number that really stands out as weak is the company's wellbore technologies segment. That isn't too surprising, though, because drilling activity in North America has ground to a halt, and companies are taking parts from idle rigs to supply those still working.

This business segment and the rig aftermarket segment are largely responsible for the disposable and replaceable parts. Eventually, that supply of spare parts will dry up, which will lead to increased demand in these business segments. For the time being, though, we will likely see continued weakness.

Clinging to the slightest good news
If there is anything you could point to as a possible sign that industry conditions are improving, there was a little bit of an improvement in the company's book-to-bill ratio. This is the amount of new long-term orders that are added to the backlog divided by the amount of revenue billed from the backlog.

This quarter, the book-to-bill ratio in its rig systems and completion and production segments improved to 0.28 and 0.99, respectively. This is the first time the company's new orders actually increased since the second quarter of last year, which just happens to be about when the market started taking a turn for the worse.

Neither of these two numbers is great because a number less than one means new orders are less than billed revenue. Also, it's not exactly clear whether the improvement in new orders is just a seasonal thing, or if it is a sign of something bigger. If it's a sign of better times ahead, though, it could slow the backlog burn we have seen during the past few quarters.

Outlook
According to CEO Clay Williams, we're likely a ways off from a rebound in the overall market. Furthermore, NOV's segments, such as rig systems, will take even longer to rebound because the rig market has to work through its own oversupply despite some small pockets for new rigs in regions where shale drilling has yet to take off:

We still see certain markets moving into the 21st century to employ proven technologies -- Argentina, the CIS, the Middle East -- and we are aggressively pursuing these opportunities. We also know many NAM drillers plan to continue to high-grade their fleets to AC Tier 1 capabilities once prosperity returns ... While we expect some new specialized offshore rigs to be built by the industry over the next couple of years, and we are developing new designs and capabilities around these, we do not expect the level of building that we have seen over the past decade to resume for quite a while. Like many, we are awaiting an increase in scrapping of older units across the fleet, which seems inevitable at this point.

Management is anticipating business to remain weak throughout 2016. Companies are likely to keep capital expenditure budgets low to live within cash flows, and produce from existing fields as much as possible until supplies either decline or demand catches up. When that does happen, National Oilwell Varco's weakest segments -- wellbore technologies and completion and production systems -- will pick back up.

What a Fool Believes
One thing that is becoming abundantly clear in this industry downturn is that the scale of spending and investment during the past decade aren't likely coming back any time soon. The offshore market is pretty well supplied with a fleet of new rigs, and the increased efficiency of land drill in the U.S. has led to an abundance of rigs.

There are still a few levers for National Oilwell Varco to pull that can lead to some new opportunities, but the ability to do more with less will have a lasting impact on the oil and gas industry's spending habits.