Please ensure Javascript is enabled for purposes of website accessibility
Log In Help Join The Motley Fool
Free Article Join Over 1 Million Premium Members And Get More In-Depth Stock Guidance and Research
By Adam Levine-Weinberg - Oct 28, 2015 at 8:40AM

While unit revenue has weakened lately, JetBlue is poised to continue its strong earnings growth next year.

Shares of JetBlue Airways (JBLU 0.47%) fell more than 3% on Tuesday, even as the carrier reported that earnings per share more than doubled in Q3, beating the average analyst estimate by $0.01. The poor stock performance was probably caused by JetBlue's 0.6% decline in passenger revenue per available seat mile, or PRASM, in Q3, and its projection that PRASM will decline by 2% in October.

However, while this represents a change in JetBlue's relative revenue performance -- particularly vis-a-vis Southwest Airlines (LUV -0.60%) -- it's nothing for investors to worry about. JetBlue has a few key profit drivers that should keep EPS rising rapidly next year.

Southwest retakes the unit revenue lead
JetBlue stock has dramatically outperformed Southwest Airlines stock this year, and a big reason has been its unit revenue outperformance. 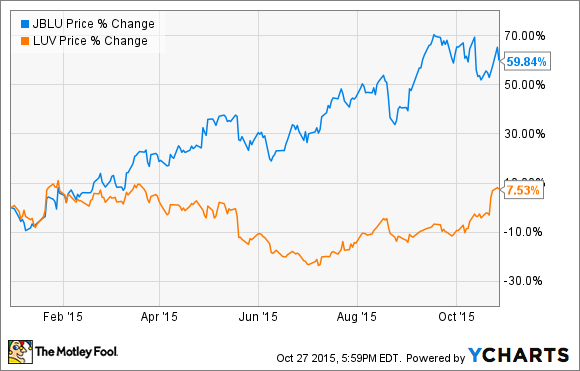 Indeed, in the first half of the year, JetBlue's PRASM rose 2.9% year over year. By contrast, Southwest Airlines suffered a 2.4% PRASM decline during that period, including a 4.6% drop in Q2.

However, Southwest Airlines now seems to be on an upswing. In Q3, while its PRASM fell 4% year over year, its total revenue per available seat mile, or RASM, declined just 0.4% because of the significant benefit from a revised co-branded credit card deal implemented in July. JetBlue's RASM result was only slightly better, with a flat year-over-year performance.

Furthermore, Southwest has predicted that it will return to year-over-year RASM growth of about 1% in Q4. That means its unit revenue performance will surpass that of JetBlue if the latter's fourth-quarter revenue is roughly in line with its guidance for October.

A tale of two metrics
As was the case at Southwest last quarter, JetBlue's RASM outperformed its PRASM in Q3. (RASM was flat despite a 0.6% PRASM decline.) That simply means that non-ticket revenue grew faster than ticket revenue.

This trend was driven by the rollout of JetBlue's "Fare Options" on June 30. Most notably, under the new system, customers who buy the cheapest fares must pay extra to check a bag. The resulting bag fee revenue is included in RASM but not PRASM. (Customers can also buy a slightly pricier fare that includes a free checked bag, in which case the whole price is classified as ticket revenue.)

JetBlue is starting to benefit from recent changes to its fare structure. Photo: JetBlue.

Since customers who bought their tickets before June 30 are still entitled to a free checked bag, the revenue from this change will grow over the next few quarters. It seems likely that this will widen the divergence between PRASM and RASM in Q4. JetBlue's October revenue guidance looks somewhat better from that perspective.

3 new revenue drivers to the rescue
In 2016, JetBlue will benefit from at least three important unit revenue drivers. The first is the full-year impact of "Fare Options". In late 2014, when JetBlue announced that it would retool its fare structure, it estimated that this would add $65 million in revenue in 2015, reaching an annual run rate of more than $200 million by 2017.

However, JetBlue refined its guidance this week. It now expects to generate at least $80 million in incremental revenue from this initiative in 2015, as more people are checking bags than JetBlue had initially expected.

This means the run-rate revenue gains -- most of which will be achieved in 2016 -- will also be higher. Management didn't provide a new target, but based on the updated 2015 guidance, the run rate could be around $250 million.

Second, JetBlue confirmed that it will launch a new co-branded credit card in early 2016. New credit card deals have led to significant windfalls at Southwest and several other major airlines in the past couple of years.

The same will probably be true of JetBlue. Based on the recent deals signed at other airlines, JetBlue's new credit card deal will probably provide at least a 1-percentage-point revenue tailwind in 2016.

Third, JetBlue is expanding its Mint premium service. This week it added more frequencies from New York to San Francisco and Los Angeles by increasing the utilization of its 11 Mint-configured planes. Next year, it will add five more Mint planes to serve the Boston-Los Angeles and Boston-San Francisco routes up to three times daily.

Strong profit growth will continue
The three revenue drivers highlighted here are likely to offset any continuing industry unit revenue weakness next year, allowing JetBlue to keep RASM stable or growing in 2016. At the same time, JetBlue's fuel costs will continue falling, based on the current oil price trajectory. JetBlue paid an average of $2.01 per gallon for jet fuel during the first nine months of 2015, well above the current price, in part because of significant hedging losses that won't recur.

The net result is that JetBlue is on pace to keep earnings growing rapidly in 2016. A 20% or even 30% increase in EPS seems achievable, barring a downturn in air travel demand or a sharp bounce in oil prices. That should be more than enough to get JetBlue stock back on track.