Please ensure Javascript is enabled for purposes of website accessibility
Free Article Join Over 1 Million Premium Members And Get More In-Depth Stock Guidance and Research
By Travis Hoium - Oct 29, 2015 at 8:02AM

Electricity sales aren't growing rapidly for companies like Southern Company ( SO 1.42% ), but they're growing enough to help earnings, and to allow the company to prepare for the future of energy.

Third-quarter revenue rose a slight 1.2%, to $5.4 billion, and net income jumped 32%, to 970 million, primarily due to fewer one-time charges than a year ago. After adjusting for these one-time items, earnings rose 8.6%, to $1.06 billion, or $1.17 per share. Here's what you should be looking at beyond the headline numbers.

A changing tide
The electricity generation and distribution business used to be a slow and steady growth industry. Utilities could count on customers using a little more energy per year, and as they built out new assets, they could charge steadily higher and higher prices each year. But energy in 2015 has changed.

Solar energy is allowing customers to produce energy on their own roofs, smart thermostats are saving people money on air conditioning, and more efficient light bulbs are becoming a drag on demand. These are all anecdotal changes, but they're showing up in Southern Company's earnings report.

For example, retail kWh sales in the company's service area rose 1.3% from a year ago, but if you adjust for weather, retail sales were only up 0.2%. That's about one-tenth of the historical growth we've seen in electricity consumption in the U.S. The potential for falling demand long term is real, which requires a change in the utility's strategy.

To its credit, Southern Company has been more aggressive than most utilities lately in getting into renewable energy. It's been buying projects with long-term power purchase agreements with other utilities, allowing the company to make a virtually guaranteed rate of return on those projects.

In fact, solar was the first thing CEO Thomas Fanning mentioned in the press release. Here's his opening statement:

We not only achieved great financial results for the third quarter, but also delivered major accomplishments that position us well for the future. Our financial performance was bolstered by Southern Power's solar investments, and we see positive momentum from the pending settlement of litigation related to Plant Vogtle units 3 and 4 and tremendous success with testing on the first of two gasifiers at the Kemper Country facility.

Right there you have the utility's last few years in a nutshell. Solar is becoming a success story that's driving growth, and nuclear energy is a headache. Oh, how times have changed in electric utilities. 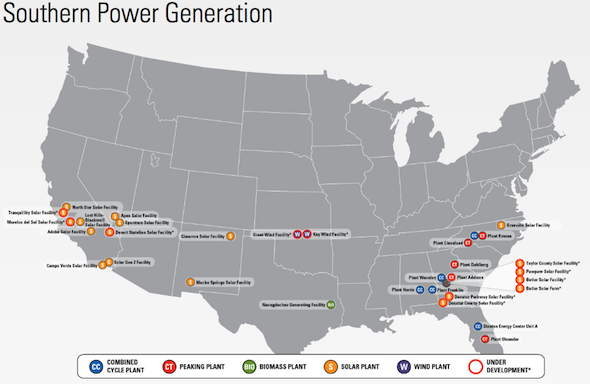 You can see from the map above that Southern Power is becoming a renewable energy powerhouse, and that's good news for investors long term. These projects come with immediate tax benefits and long-term cash flows that can last two decades or more. To put some numbers behind that success, traditional operating companies grew adjusted net income 6.9% last quarter, and Southern Power grew 59.4%.

As traditional utilities take a blow from increased efficiency and distribute renewable energy, it's important for management to adapt and find ways to make money in this changing market. Southern Company is adjusting better than most utilities, and the third quarter's results show how that can positively impact financials -- even today.

Is Southern Company Stock a Buy?