Please ensure Javascript is enabled for purposes of website accessibility
Log In Help Join The Motley Fool
Free Article Join Over 1 Million Premium Members And Get More In-Depth Stock Guidance and Research
By Brian Feroldi - Oct 30, 2015 at 8:03AM

Investing in clinical-stage biopharmaceutical companies isn't for the faint of heart. Companies in this early stage have the odds stacked against them, as only one in every 5,000 to 10,000 experimental compounds will make it all the way through the FDA approval process. Worse yet, they often require more than a decade of research and development time and come with an estimated average cost of $2.6 billion, so given the long odds of success it's no wonder many investors simply write off the entire sector as uninvestable. That may be a mistake, though, since if you're able to buy into that needle-in-a-haystack company, the returns can be life-changing, and finding a single winner can more than make up for a dozen or more losers.

One way to help reduce risk is to only invest in companies that are already running late-stage clinical trials on drug candidates that promise multi-billion sales potential if all goes well. One company that looks to fit that description well is Intra-Cellular Therapies (ITCI -3.35%), a biopharmaceutical company with a focus on creating products that treat disorders of the central nervous system. The company's shares have been on fire recently as its lead product candidate, ITI-007, recently had clinical results that looked impressive, and if all continues to go well the company appears to be staring down an enormous market opportunity.

Early results look good
ITI-007 showed some very promising early clinical outcomes in patients with diseases like of the central nervous system, such as depression, schizophrenia, and bipolar disorder. This once-daily medication was shown to be effective at improving sleep maintenance, had antipsychotic properties, reduced anxiety, and more, all while showing placebo-like safety.

Focus
Of course, since treating each indication requires running its own set of clinical trials, the company has to be selective about which diseases look the most promising. While the company already has several trials currently running, ITI-007's use as a treatment for Schizophrenia is in the latest-stage development.
I 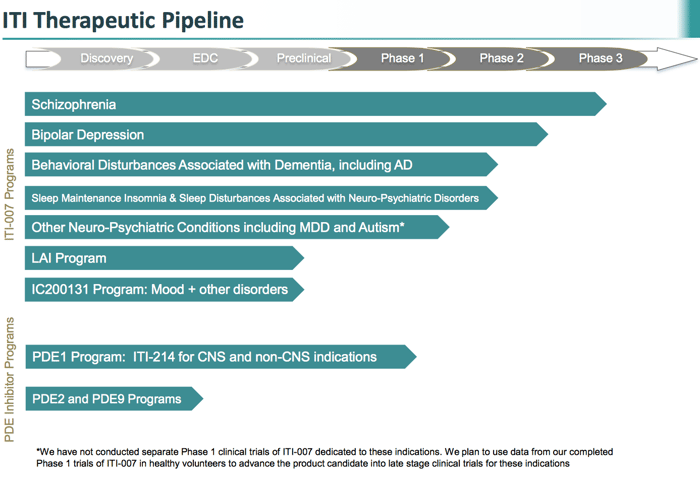 The company is currently running two separate phase 3 clinical trials testing ITI-007 as a treatment for schizophrenia, and it just reported top-line results from the first of these trials that looked very encouraging. The 60 mg dose of ITI-007 in particular was able to show statically significant superiority over placebo in antipsychotic efficacy, helped reduce the severity of the illness, and showed improved social functioning when compared to placebo.

Investors were so excited by the reported results that the company's stock shot up by 83% in a single day, and another catalyst is coming down the road as investors will get their first look at the results from its second phase 3 results in mid-2016.

The $6 billion opportunity
Taken together, the global market for disorders of the central nervous system affects millions of patients around the world and produce tens of billions in worldwide sales. Drugs that help treat schizophrenia alone exceeded more than $13 billion in 2013, and when you add in other disease states such as dementia, Alzheimer's, and depression, that number skyrockets to more than $27 billion worldwide.

Like any clinical-stage drug, peak sales estimates for ITI-007 are all over the map, but the more bullish estimates out there see ITI-007 opportunity as big as $6 billion worldwide, which is a simply huge number for a company currently valued around $2 billion. Of course, like most smaller players, Intra-Cellular would almost certainly have to utilize partnerships to grab a slice of a pie that big, so it would probably only receive royalty payments that would be a fraction of the total sales, but the opportunity here is still simply enormous.

Burn notice
With any clinical-stage company, the company's cash position should always be top of mind, and the company looks in good shape here. The company recently completed a secondary offering that netted it around $345 million, which when added to the $204 million that the company had on its books as of June 30 should give it a war chest of over $500 million at its disposal. The company is on pace to burn roughly $90 million or so this year, so it appears to have plenty of cash to keep the clinical trials rolling for at least three more years into the future, and possibly more.

Risk, risk, and more risk
While everything looks good on paper, like any clinical-stage biotech, the risks here are certainly huge; since the majority of the company's value is tied up in the future of ITI-007, if anything were to go wrong with it in late-stage clinical trials, it could be disastrous for the shares.

There is also reason to believe that ongoing trial data might not be perfect, as in phase 2 clinical trials of ITI-007 the 120 mg dose  was unable to show a statistically significant improvement patients who took the drug. In addition, in phase 3 trials the 40 mg version also was unable to reach its primary endpoint, so for now it appears that results hinge on the performance of its 60 mg version of the drug, which may give it little room for error.

Lastly, it's important for investors to know that ITI-007 was not a homegrown compound, as the company actually acquired it from a deal in 2005 with pharma giant Bristol-Myers Squibb (BMY -0.21%) for only $1 million upfront. Is this the case of Bristol-Myers having a gem and accidentally selling it for a song? Or did the company give it a good, hard look and end up not believing in its future? And even if all goes well and ITI-007 gains regulatory approval, there is still that pesky matter of actually commercializing the drug in a super-competitive marketplace.

The Foolish bottom line
While this is certainly anything but a risk-free investment, if all goes well for ITI-007 then Intra-Cellular could be staring down a massive market opportunity and the company could easily be a multibagger from here. I'll be adding Intra-Cellular's stock to my watch list, and if we see any weakness in the share price or if we get any more exciting clinical data, I may just be willing to add a few shares to my portfolio.