Analysts covering this stock seem impressed by Inovio's emerging clinical pipeline, which is led by its late-stage asset VGX-3100, an immunotherapy targeting the E6 and E7 antigens of HPV types 16 and 18 that are present in both pre-cancerous and cancerous cells. The biotech's pipeline also sports several experimental therapies being co-developed with Big Pharma partners AstraZeneca (NASDAQ:AZN) and Roche: 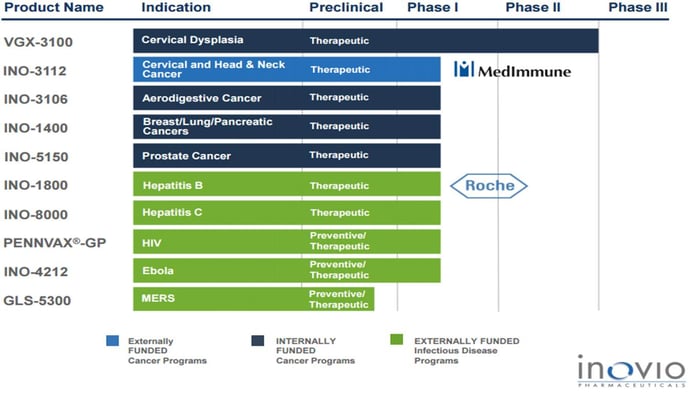 Given this staggering upside potential, this stock certainly merits a deeper look. So let's dig in.

Is Inovio a late bloomer?
Perhaps the first thing investors need to understand is that Inovio is essentially the elder statesman within its immediate peer group. At present, the landscape of clinical-stage biopharmas and biotechs is filled mostly with relatively new companies, many of which were only founded in the last five years during the great biotech bull run of 2010 to 2015.

By contrast, Inovio was originally founded in 1979 and incorporated in 1983, and it's still searching for its first FDA-approved product.

With Inovio now barreling toward the start of a pivotal late-stage study for VGX-3100, however, I think it's high time to consider whether this long-lived company is finally coming of age. The answer to this question seems to lie in VGX-3100's chances of successfully completing its planned late-stage study. So let's turn our attention to the published clinical data.

According to an article recently published in The Lancet, the modified intention-to-treat analysis produced a histopathological regression rate of 48.2% (55 out of 114) in the VGX-3100 arm, compared to a rate of 30% (12 out of 40) among patients receiving a placebo. This comparison was statistically significant with a p-value of 0.034.

Although this significant result appears promising, it doesn't inspire a ton of confidence. The potential fly in Inovio's ointment is that previous cohort studies have reported spontaneous regression rates of close to 35% for this indication after four to six months, which is not far from the overall regression rate observed in the placebo population in VGX-3100's mid-stage study.

Why are spontaneous regression rates noteworthy? Because what matters is the magnitude of the difference between the experimental and control arms. In the mid-stage study, Inovio reported a difference of 18.2% in the modified intention-to-treat analysis, and this was only marginally significant.

However, the number of patients receiving placebo was around a third of the total of those allocated to the experimental arm. So it's natural to wonder if a larger sample size would have led to a higher observed regression rate among patients in the placebo group -- perhaps one closer to the average of 35% observed in other, larger studies. If that turned out to be the case, this result could have easily fallen on the wrong side of statistical significance.

Looking ahead, VGX-3100's planned late-stage study should enroll enough patients to provide a reliable estimate of the spontaneous regression rates in the placebo arm and put this issue to rest.

Is Inovio worth the risk?
For the reasons outlined above, I'm not super confident in VGX-3100's ability to meet its primary endpoint in a late-stage study. That said, the company does have some compelling ongoing collaborations with Astra and Roche that are worth watching.

Of particular note, Astra's idea of exploring Inovio's INO-3112 (VGX-3100 combined with DNA-based IL-12) with its experimental immunotherapy candidates in human papillomavirus-driven cancers is cutting-edge, and it could produce a novel combination approach to treating this broad family of malignancies. Hopefully, we'll get a look at some preliminary data from this collaboration at next year's American Society of Clinical Oncology meeting.

Until its clinical platform matures further, though, Inovio is best viewed as a watchlist candidate. Put plainly, Wall Street may turn out to be correct in its outlook, but there's simply too much risk at this stage for my taste.