Please ensure Javascript is enabled for purposes of website accessibility
Free Article Join Over 1 Million Premium Members And Get More In-Depth Stock Guidance and Research
By Steve Symington - Oct 31, 2015 at 7:00AM

Let's take a closer look at what Yandex accomplished this quarter: 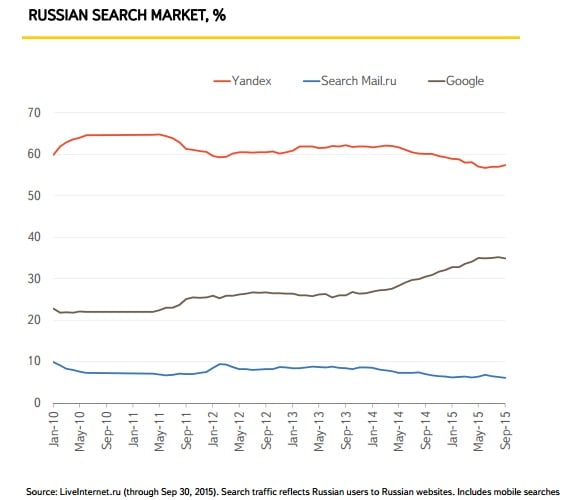 What management had to say
"This was an excellent quarter for the company on all fronts," added Yandex CEO Arkady Volozh. "We stabilized our search share in Russia, became the default search engine for Windows 10 in Russia, Turkey, and several other countries, and achieved a historic decision from the Russian antimonopoly service that we hope will return fair competition to the market."

Looking forward
Finally, only one quarter after reinstating guidance previously suspended in the face of macroeconomic challenges, Yandex increased its 2015 outlook for ruble-based revenue to increase 14% to 16%, up from the prior range of 11% to 13%.

All things considered, from Yandex's Q3 top- and bottom-line outperformance, stabilizing market share, and increased full-year outlook, you'll be hard press to find any Yandex investor willing to complain about the company's relative strength right now. In the coming quarters, as the effects of the Google ruling take hold and Yandex solidifies its presence through Windows 10, it seems shareholders have plenty to look forward to from here.