What: Sometimes when you see a stock more than double its price in a single day, it's not easy to pinpoint the reason.

That's not the case for Weight Watchers International (NASDAQ:WW). The company closed on Friday, Oct. 16 at $6.79, and then opened on Monday, Oct. 19 at $11.99 before climbing to an intraday high of $15.09 before close at $13.92. The gains were huge, and the reason was obvious. Before the market opening on Oct. 19, the company announced that Oprah Winfrey had taken an equity stake in the company and joined its board of directors. 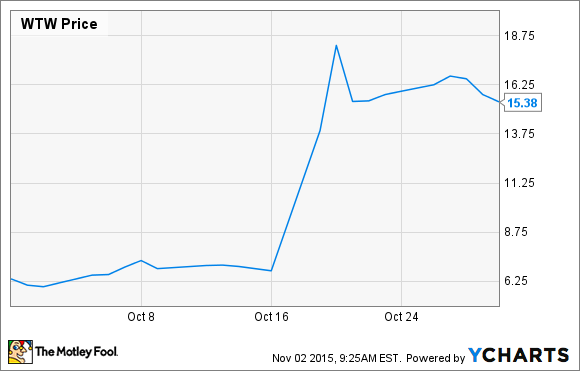 "Weight Watchers has given me the tools to begin to make the lasting shift that I and so many of us who are struggling with weight have longed for," said Winfrey in a press release. "I believe in the program so much I decided to invest in the company and partner in its evolution."

So what: Though she no longer has her signature talk show, and ratings for her television network have been soft, Winfrey remains a huge name, and investors clearly agree. Weight Watchers stock spiked on the announcement and built on those gains to close the month up 141.1%, according to S&P Capital IQ data.

The former talk show host has publicly dealt with weight issues, making her uniquely identifiable with the Weight Watchers audience.

Weight Watchers CEO Jim Chambers said he thought the fit between the star and the brand would lead to a successful partnership.

"Through our conversations, it became clear that there is tremendous alignment between Oprah's intention and our mission," he said. "We believe that her remarkable ability to connect and inspire people to realize their full potential is uniquely complementary to our powerful community, extraordinary coaches and proven approach."

Now what: Oprah has traditionally been able to ignite interest in a product simply by mentioning it. In this case, she is setting up Weight Watchers for sustained growth by not only becoming a board member, but also becoming a member and agreeing to "candidly share her experiences and perspective" along the way.

She has also purchased 10% of the company and will receive options to acquire an additional 5% of the fully diluted shares.

This is a rare case where a brand and a celebrity line up perfectly, and the stock should not only post a temporary gain, but there's every reason to believe it should be sustainable.