Kinder Morgan's (NYSE:KMI) founder Richard Kinder wanted to make one thing abundantly clear on its third-quarter conference call: Kinder Morgan is a natural gas story -- and that story is really good. Here are four things he wanted investors to know about that tale.

Kinder led off his comments by saying:

I want to give you some hard cold facts about the natural gas story, which is our single most important business. As many of you know our natural gas operations produce over half of our cash flow and we move about a third of all the gas consumed in the United States. So, to put it very simplistically as natural gas demand grows, so do we.

While Kinder Morgan is a diversified midstream company, its core business is natural gas pipelines, which Kinder noted produces half its cash flow. Because of this, natural gas is important to the company's current operations as well as its future.

This demand growth isn't a pipe dream because there are four major drivers fueling that growth, which are detailed on the slide below. 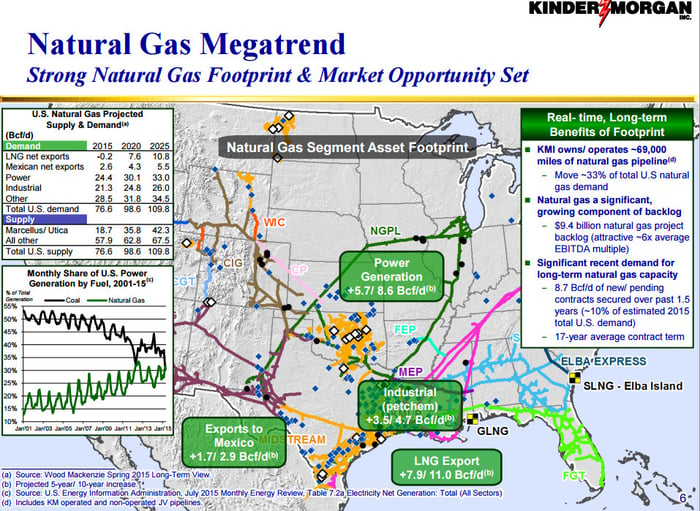 1. It's electric
Kinder continued by saying:

The first and probably the most interesting is electric generation. If you look at the 2015 mix of generating output -- and this is according to the EIA -- 32% is gas and 33% coal ... [and this] represents a dramatic shift to the positive for natural gas. If you flash ahead again -- these are EIA numbers -- to 2030 their projection of the mix of generation is 39% gas, 18% coal. ... If you want to look at Kinder Morgan specifically our gas transportation volumes for electric generation are up 18% year-to-date 2015 versus the same period 2014. ... So these are real numbers, real occurrences that are happening in the natural gas story.

Kinder first points out the fundamental shift away from coal and toward cleaner-burning natural gas. It's a shift that has significantly affected the coal industry with a number of producers in, or on the brink of, bankruptcy. Coal producer Peabody Energy (OTC:BTU) is one of those in the brink. One reason for this is because demand for coal by utilities continues to sink. Peabody Energy noted in its third-quarter report that it "now projects utility coal demand to decline approximately 100 million tons in 2015, primarily due to lower natural gas prices" with gas pushing down coal's share of electric generation. Worse yet, Peabody Energy "expects 2016 utility coal consumption to be below 2015 levels based on current natural gas prices and expected plant closures." That said, Peabody's loss is Kinder Morgan's gain because it is building a number of pipelines to support additional gas demand by utilities.

2. Viva la Mexico
The natural gas story, however, extends far beyond its market share battle with coal in the U.S. Kinder noted:

Kinder points out that an increasing amount of U.S. natural gas is making its way into Mexico for two reasons. First, like the U.S., Mexico is building more natural gas power plants, which is increasing its demand for gas. However, it's increasing its demand at a time when production in the country is declining, which has opened up a number of opportunities for Kinder Morgan to expand its pipelines to export gas to Mexico, including a $38 million expansion to its Mier-Monterrey pipeline.

3. The chemical reaction
Next, Kinder noted:

Third driver is the tremendous build-out of US industrial and petrochemical facilities. Let me give you the facts. The American Chemistry Council now counts 243 projects with a cumulative investment of $147 billion for the years 2010 to 2023.

4. LNG is coming
Kinder concluded with:

Finally let's talk about LNG exports. These are no longer years away. FERC approved LNG export projects have 10.6 Bcf a day of capacity. By the end of this year Sabine Pass Train 1 will be in service with 650 million a day of capacity. By next year with Sabine Pass Trains 1 through 3 online LNG capacity will be 1.95 Bcf a day. By 2019 U.S. LNG export capacity will be 8.97 Bcf a day only counting FERC approved projects which have achieved final investment decision.

Investor takeaway
If there's one thing Richard Kinder wanted to make abundantly clear on the company's third quarter conference call it is the fact that the natural gas story is real. Further, there are four drivers of that story, all of which have huge growth potential for the company both in the near and long term. This is why Kinder Morgan believes its best days appear to be ahead of it.