During Twitter's (NYSE:TWTR) third-quarter earnings call, CEO Jack Dorsey pointed out the importance of brand advertisers to Twitter: "We built our business on the back of those advertisers, unlike other Internet companies, really delivering great value to them." Indeed, the company makes the majority of its ad revenue from big brands.

But the opportunity to grow its number of brand advertisers is shrinking as Twitter saturates the market, particularly in the United States. "We're seeing less growth in advertisers now than we have been in the past, given this tremendous penetration," Dorsey told analysts. To continue growing, Twitter will have to increase its share of ad spend at those big companies. Twitter's latest tool for brands, Brand Hub, aims to do just that. 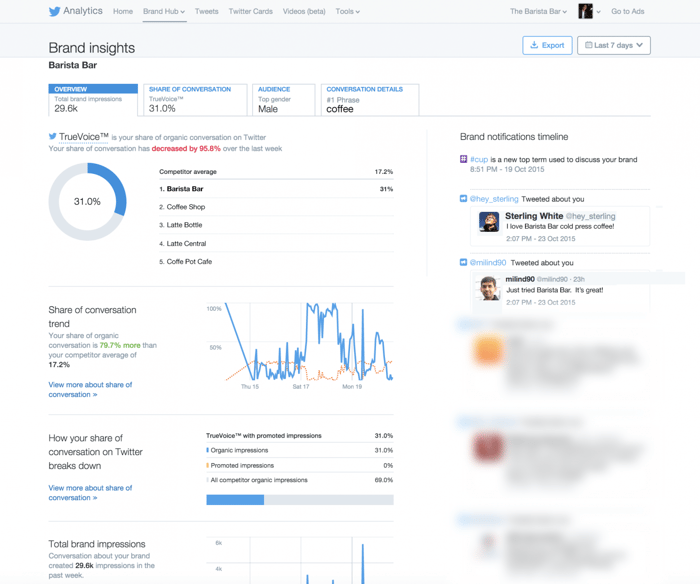 More traditional brand metrics
Many of the new ad tools from both Twitter and rival Facebook (NASDAQ:FB) have focused on things such as conversion and more detailed measurements of specific ad campaigns. Brand Hub takes a more holistic view, giving businesses a better idea of how people are talking about their brands on Twitter.

One feature, called TrueVoice, tells a business how its brand stacks up against competing brands in conversation share. This information is updated in real time, so brands can measure the immediate impact of something like a television commercial during the World Series. Theoretically, this would also help businesses see the impact of a Twitter ad campaign over both short and long periods of time.

Brand Hub also provides audience insights, similar to a feature Twitter started providing all advertisers this summer. The new tool includes additional information, including when key influencers tweet about a brand. That information could be useful for brands, and Twitter could capitalize on interest in brands connecting with influencers through Niche -- a social-media talent agency it acquired earlier this year.

Lastly, Twitter is offering insights into conversation details. Brand Hub can tell businesses the top phrases associated with its brands and how many impressions a tweet received both on and off Twitter. Twitter has been touting its off-site reach lately, claiming 1 billion total viewers per month, so this may remind brands how valuable Twitter can be. The new feature can also break out things such as brand loyalty, purchase intent, and more.

Combating Facebook
As I mentioned, Twitter's business has always been heavily reliant on big brands to drive revenue. Offering them new insights into how their ads affect real-time conversation, reach, purchase intent, and other important metrics might provide brands incentive to increase ad spend on Twitter.

On the other hand, none of these insights requires a brand to spend any more money on Twitter. A business could view the impact of an ad on another digital platform, for example, to measure the impact it has on Twitter's audience.

Facebook is always a threat to attract more brand advertising with its 1.5 billion users, which beats even the largest number Twitter has thrown out for its total audience. Facebook's users are also more engaged, providing more opportunities for brands to spread and reinforce their message.

What's more, Facebook also owns Instagram, which has flown past Twitter in total users, and skews toward a younger audience, which is more valuable for brand advertisers. Instagram opened up its ads API this summer to significantly more advertisers, and it has the benefits of Facebook's targeting capabilities. With a larger audience, Instagram stands to attract more ad spend than Twitter in the near future. New analytics tools won't do much to change that.

Considering direct ad sales to brand advertisers make up the majority of Twitter's ad revenue, growing those advertisers' spend is key to continuing to grow revenue at the rate Wall Street expects. Unless Brand Hub offers details on metrics brands originally made incorrect assumptions for, it won't have a major impact on how much they're willing to spend on Twitter. The only thing that will really move the needle with brands is a larger audience -- and Twitter has fallen flat recently when it comes to that metric.