It's been proven time and time again that long-term investing outperforms short-term trading, and with that in mind, we asked some of our top Motley Fool contributors to highlight stocks they have no intention of selling from their portfolios.

Todd Campbell: Given investors' experience with companies like Polaroid and Radio Shack, investors should probably never say never; however, if I were to pick one company I think I could hang on to forever, I'd have to go with biotech Goliath Celgene Corp. (NASDAQ:CELG).

After making a massive run higher, biotech stocks have fallen out of favor recently, but that doesn't change the long-term potential that exists for Celgene.

The company's Revlimid and Pomalyst are leading therapies used to combat multiple myeloma, and Abraxane is increasingly being used to fight back against lung and pancreatic cancer, but it's Celgene's pipeline and long-haul guidance that make me want to stick with its shares for years and years.

Last year, Celgene expanded into autoimmune disease via its Otezla psoriasis treatment, and recently, a $7.2 billion acquisition of Receptos may have landed the company what could be a best-in-class multiple sclerosis drug someday. Additionally, Celgene's pipeline is packed with therapies addressing a variety of indications ranging from Crohn's disease to solid tumor cancers. Also, a deal inked with Juno Therapeutics this past summer nets it arguably the best in a new class of immuno-oncology drugs known as CAR-T therapies.

Overall, Celgene thinks its sales could climb to $21 billion in 2020 from $7.67 billion in 2014, and that its EPS could increase to at least $13 that year, up from $5.96 in 2014. If the company can deliver on that forecast, I think Celgene's shares could be one of the best long-term buys available to growth investors.

Andres Cardenal: Berkshire Hathaway (NYSE:BRK.A) (NYSE:BRK.B) is an amazing stock to hold for the long term, perhaps even forever. The company is a diversified collection of high-quality business in different industries, most of them carefully selected by Buffett himself.

Warren Buffett does not make investment decisions based on short-term considerations; in his own words: "When we own portions of outstanding businesses with outstanding managements, our favorite holding period is forever." Berkshire's portfolio of companies is is built to last, and even better, the whole is greater than the sum of the parts.

The company's business model is quite smart. Berkshire's insurance and reinsurance operations are remarkably profitable: The segment brings in approximately 25% of total pre-tax earnings. In addition, insurers receive premiums up front and pay claims later, and sometimes these payments can stretch out over several decades. Buffett refers to this money as "the float."

Even if the float is not owned by Berkshire, the company can use it to invest for its own benefit over the long term, and this is a major return driver for investors. Berkshire's float has increased exponentially over the decades, from $1.6 billion in 1990 to $28 billion in 2000, and reaching almost $84 billion by the end of 2014.

Berkshire offers undisputed soundness, diversification, and a top-notch management team. When making investment decisions for the long term, these are crucial attributes to consider.

Tyler Crowe: There are so many reasons I'm never selling my shares of Waste Management (NYSE:WM) that I don't think I can name them all here. So, let's start with the obvious ones. The company deals in one of those need-to-have industries that rarely goes out of style: handling refuse and garbage. This is actually much harder than it seems, especially considering the difficulties and costs in opening and managing a landfill. With more and more people putting up political roadblocks to opening new landfills, the existing ones owned by Waste Management and others will remain in high demand.

Something else that makes Waste Management so attractive is the fact that it's a pretty innovative company for what so many think of a dirty commodity business. For example, Waste Management has been steadily converting its fleet of refuse collection vehicles to run on natural gas, which can actually be collected from its landfills as trash decomposes and produces methane. By converting a formerly wasted product into its vehicle fuel, the company can save millions annually in fuel costs.

Then there is Waste Management the stock. Over the past 11 years, the company has built a solid reputation for steadily increasing its dividend and reducing its total share count like clockwork. 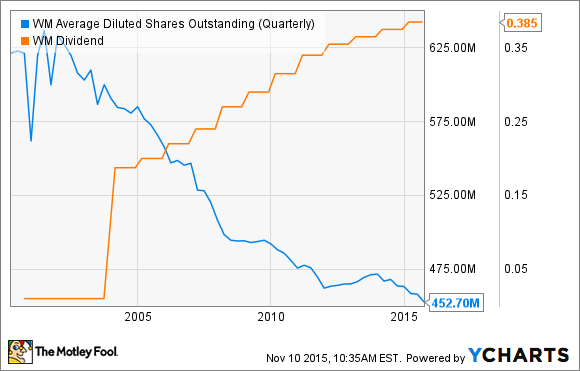 With shares trading at 23 times earnings, I wouldn't call the company a screaming buy today. There will be opportunities down the road where shares will likely trade for less. As a current shareholder, though, unless we find a revolutionary way to handle our trash, I will never be selling my shares of Waste Management.