Amazon (NASDAQ:AMZN) recently expanded its Pay With Amazon buttons to third-party mobile apps, which lets users login with Amazon accounts and pay with their stored billing data. It is also "tripling down" on spreading its web-based Pay With Amazon buttons, which it originally introduced in 2013, to overseas websites. To complement those moves, Amazon will kill off Register, its Square and PayPal (NASDAQ:PYPL) Here competitor that processes payments with a card-reading dongle and mobile app.

All of these moves suggest Amazon is streamlining its payments business and getting serious about disrupting the mobile payments market. So should PayPal, which only went public again in July, be worried?

Amazon's uphill battle in mobile payments
It's easy to see how Amazon could disrupt the industry. The company finished last quarter with 294 million active customer accounts. Research company CIRP estimates that nearly half of U.S. Amazon customers, or 47 million people, are signed up for its premium Prime service. Many of these shoppers have likely become so dependent on Amazon that they wouldn't think twice about paying with their Amazon accounts.

While customers might embrace the platform, merchants have been wary of using the service due to concerns about sharing their transaction data with Amazon, which could theoretically mine the data to market and price its own products. Speaking to Re/code, Amazon claims its platform only sees transaction sums instead of purchase details. Amazon also downplayed trust concerns by noting that Marketplace, which lets outside merchants sell goods against Amazon, now accounts for nearly half of all goods sold on the site.

Nonetheless, Amazon's payments efforts have flopped before. TextBuyIt, which was discontinued in 2011, was a service that let users buy items through SMS messages. Amazon WebPay, which imitated PayPal's pay by email feature, was shut down last October. This January, it killed Amazon Wallet, its digital wallet app, just six months after releasing it. Despite these fits and starts, Amazon claims that Pay With Amazon's total payment volume has risen 180% annually, although it didn't disclose any revenue figures.

Should PayPal worry?
Last quarter, PayPal's active customer accounts rose 10% annually to 173 million. Total payment volume, across both desktop and mobile platforms, rose 20% annually to $69.7 billion. Mobile payment volumes, which accounted for 24% of that total, rose 42%. Based on those numbers, it seems like Amazon is experiencing faster growth on a larger pool of potential users, but we can't be sure unless Amazon releases solid user and revenue numbers. 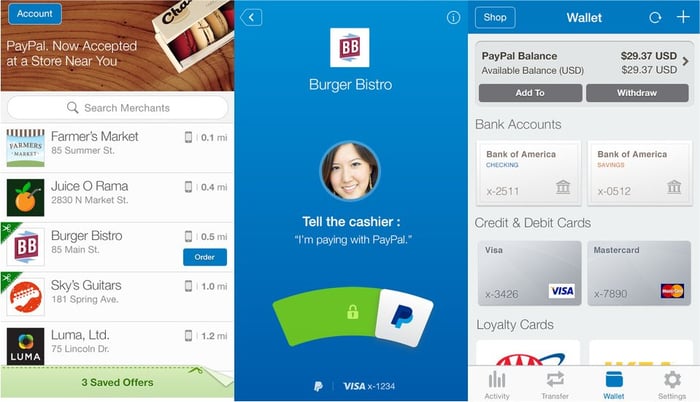 However, third-party data regarding the usage of both services shows that PayPal remains far ahead of Amazon. Research company Built With shows that Pay With Amazon is only used on 238 of the top one million webpages on the Internet, versus 13,042 for PayPal. Analytics company Datanyze reports that within Alexa's top one million websites, PayPal is used on 28,424 sites, while Pay With Amazon is only used on 431.

A common mobile enemy
On mobile apps, both PayPal and Amazon both face a dangerous new competitor: Apple (NASDAQ:AAPL). Apple plans to make Apple Pay the default payment option for iOS devices, and it has attracted plenty of high-profile partners. According to Phoenix Marketing International, 14% of U.S. households with credit cards had signed up for Apple Pay by the end of September, up from 11% in February. PayPal allowed iOS developers to integrate its payment platform into third-party apps two years ago, but Apple Pay's growth could make it seem redundant.

Meanwhile, Amazon remains behind the technological curve. The mobile version of Pay With Amazon still redirects the user out of an app to complete the transaction on the mobile version of Amazon's website. It also lacks Apple and PayPal's list of high-profile merchants. Instead, Amazon's most "well-known" clients include fashion retailer All Saints and watch seller Shinola. That lackluster support is likely due to the aforementioned trust issues regarding transaction data. Moreover, big box retailers that were previously burned by Amazon probably prefer working with Apple or PayPal instead.

PayPal should be worried but not about Amazon
Research company IDC expects worldwide mobile payments to surge from $500 billion in 2015 to $1 trillion in 2017. That's why companies like Amazon and Apple are entering the market.

But for now, PayPal investors shouldn't worry about Amazon. Tech issues will likely prevent it from being as seamless as Apple or PayPal's solutions, and trust issues -- whether real or imagined -- could keep major vendors from signing up. For now, PayPal investors should worry about the growth of Apple Pay and comparable services like Android Pay over Amazon's clumsy entrance into the mobile payments arena.