Was the Candy Crush Saga maker really worth $5.9 billion?

Activision Blizzard (ATVI -1.09%) recently announced that it will acquire King Digital Entertainment (KING.DL), the maker of Candy Crush Saga, for $5.9 billion. The deal will turn Activision Blizzard into a cross-platform gaming powerhouse by merging its hit console and PC franchises with King's massive mobile presence.

But the deal also represents one of the biggest buyouts in recent gaming history. Let's take a closer look at the logic and math behind the deal to see if Activision paid a fair price for King.

Activision's "mobile and other" division currently includes its fledgling portfolio of mobile games and stand-alone sales of Skylanders toys. The unit generated $131 million in revenues last quarter, up from $35 million in the prior year quarter. Most of that growth was attributed to its top game, Hearthstone: Heroes of Warcraft. However, mobile revenues only accounted for 13% of Activision's top line.

By buying King, which generated $473 million in revenues last quarter, that percentage will substantially increase. Activision believes that the acquisition will boost its non-GAAP revenues and earnings by 30% share by 2016. By combining its mobile user base with King's, Activision will reach over 500 million monthly active users (MAUs).

Activision's acquisition of King can also be considered a defensive move against Electronic Arts (EA -2.17%), which had 150 million mobile MAUs at the beginning of this fiscal year. Last quarter, EA's mobile revenues rose 13% annually to $142 million, or 12% of its top line. EA's mobile portfolio, which is much more diverse than Activision's, features bite-sized versions of top franchises like Madden, Need for Speed, and SimCity. 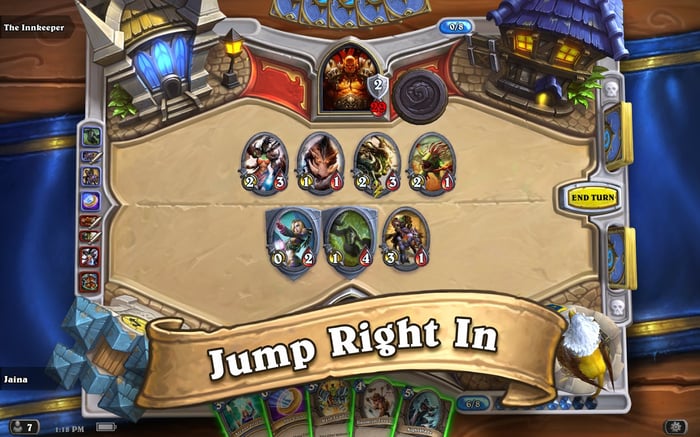 But King is losing momentum
While it makes sense for Activision to buy King to boost its mobile presence, but King isn't really growing. Last quarter, King's revenue fell 9.5% annually to $473 million while gross bookings fell 8% to $502 million. MAUs declined 4% to 474 million as daily active users (DAUs) dipped 3% to 133 million.

The good news is that non-Candy Crush Saga bookings rose from 49% in the prior year quarter to 60%, which shows King is diversifying away from its core franchise with games like Farm Heroes Saga or Bubble Witch Saga. However, it would be more encouraging if that rise wasn't accompanied by a slowdown in bookings and MAUs.

Monthly gross average bookings per paying users rose from $20.92 a year earlier to $24.45, indicating that King can offset its declines in bookings and MAUs by convincing existing players to buy more virtual goods. That's why King's net income rose 0.7% annually to $143 million even as revenues, bookings, and MAUs fell.

But depending on a shrinking base of paying users spending more is an unstable strategy. Earlier this year, app-testing firm Swrve noted that only 2.3% of mobile gamers in "freemium" games have ever made a virtual purchase and that the top 10% of that group (0.23% of all gamers) generated about two-thirds of all sales across the industry. That's why many mobile game makers are depending more on in-game advertising. But unlike those rivals, King has repeatedly stated that its goal is to develop "engaging, advertising-free content." Shifting gears now, or under Activision, could alienate a lot of gamers.

Did Activision Blizzard overpay?
Activision's offer of $5.9 billion, or $18 per share, represents a 20% premium over King's closing price before the deal was announced. However, it represents a steep discount from King's all-time high of $22.54 last July. At $18 per share, King trades at just 10 times earnings, a substantial discount from an average P/E of 16 for the mobile gaming industry.

Activision will use $3.6 billion of its offshore cash, combined with a $2.3 billion loan, to fund the all-cash buyout. Since King is based in Ireland, the buyout won't require Activision to repatriate its overseas cash to the U.S., where it would be taxed. After the acquisition, Activision will still have about $930 million in cash and equivalents. Taking out the loan will boost its total debt from $4.1 billion to $6.4 billion, but it's smart to do so before interest rates rise.

Based on those figures, Activision didn't overpay for King. Nonetheless, it needs to present clear ways for King to grow its gaming portfolio beyond Candy Crush and prevent more fickle users from slipping away. Otherwise, it might have spent $5.9 billion on an aging one-trick pony.