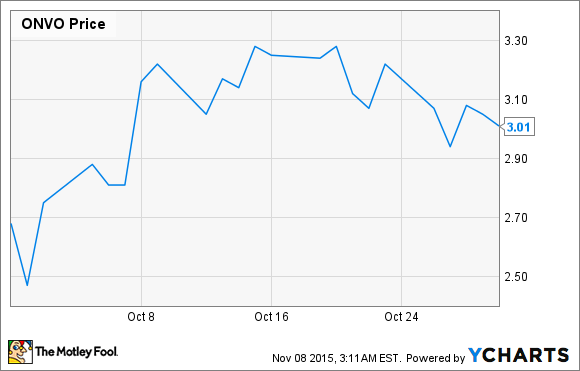 Shares of Organovo Holdings (NASDAQ:ONVO), a human tissue engineering company focused on aiding the drug discovery process and the development of implantable tissues and organs, surged by 12% in October according to data from S&P Capital IQ. The two catalysts for the jump were relatively subtle.

First, in mid-October Organovo announced that UniQuest had signed an exclusive worldwide licensing agreement with Organovo to "patent applications relating to methodology for producing kidney cells from induced pluripotent stem cells (iPSCs)." The research team at UniQuest, an arm of the University of Queensland, previously demonstrated its success of growing kidney tissue from iSPCs, which can be used for disease modeling in laboratories, as well as drug screening. Organovo plans to use the technology to efficiently enable drug developers to understand how an experimental therapy could affect a patient's kidneys for a low cost.

Under the terms of the deal, UniQuest will receive an upfront technology access fee and may receive milestone and royalty payments should its research lead to commercial sales of an assay product.

The second catalyst was that the calls for prescription drug reform mostly died down from where they were at the beginning of the month. This doesn't mean that prescription drug reform is off the table by any means, but the momentum behind reform has calmed a bit, which is great news for Organovo, whose liver (and soon kidney) assays can be critical for drug developers. If Congress takes on drug companies, it could disincentivize research and trickle down to hurt Organovo.

The real question you should be asking here is whether or not this resurgence in Organovo's stock is the beginning of a longer-term move higher or merely a blip. While I believe the technology behind Organovo's research is unique and exciting, the company has yet to prove that it can turn a great story into a successful product. Don't get me wrong; I'd love to see it happen. However, from an investing standpoint it makes Organovo stock a very risky investment for the time being, even if cash burn isn't a big concern.

My suggestion would be to add Organovo to your watchlist list if the company's technology interests you, but to remain on the sidelines until it demonstrates a substantial reduction in its quarterly losses.