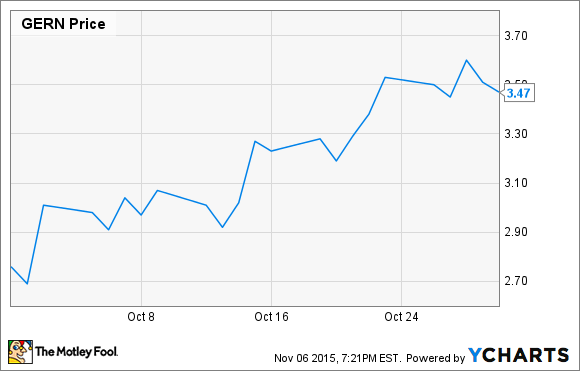 Shares of Geron (NASDAQ:GERN), a clinical-stage small-cap biopharmaceutical company focused on the development of imetelstat, an experimental treatment for myelofibrosis, surged by 26% in October based on data from S&P Capital IQ. The reason? Primarily a lack of follow-through from lawmakers concerning prescription drug reform.

In September, Geron's stock was creamed following a proposal from presidential candidate Hillary Clinton to reform the way prescription drugs are priced. Clinton's proposal called for possible reductions in patent length, and gave the government more power to negotiate better prices for Medicare and other government agencies. Because there is no cure for myelofibrosis, a rare type of bone marrow cancer that leads to scarring of the bone marrow, any expected approval would probably lead to imetelstat being quite pricey. Thus, Geron's experimental drug would be one of many therapies potentially targeted by prescription drug reform.

More than a month later, calls for prescription reform are still out there, but the fire and pitchfork attack on drug developers has mellowed dramatically. Time is a great healer during panic situations, just we saw throughout the biotech sector in September.

Where does Geron go from here? It's tough to say, because imetelstat still has a ways to go in its development process. However, there's no denying that its development is exciting, and its potentially lucrative deal with Johnson & Johnson establishes that it could have a blockbuster therapy on its hands.

For those unfamiliar with this market, Incyte's (NASDAQ:INCY) (which is partnered with Novartis) Jakafi, which is known as Jakavi in overseas markets, is the only approved therapy for myelofibrosis. However, Jakafi, a JAK2 inhibitor, is only designed to alleviate the symptoms associated with myelofibrosis, such as an enlarged spleen. Jakfai provided no partial or complete responses in clinical studies. Imetelstat, on the other hand, has demonstrated objective responses, albeit in early stage studies.

If I were you, I'd make sure I had Geron somewhere on my watchlist.