A lot has been made of the way business-to-consumer e-commerce demand is surging, and how package delivery companies like United Parcel Service (NYSE:UPS) and FedEx Corporation (NYSE:FDX) will benefit from it in the long term. However, it hasn't been smooth sailing for those shippers just yet. Volumes have increased strongly during recent holiday seasons, putting pressure on both companies as they attempt to deal with the demand. Consequently, both companies have taken costly measures to improve their abilities to cope with peak. Has peak demand affected profitability, particularly in the fourth quarter?

A look at adjusted operating profit growth in the core U.S. domestic package segment -- which typically generates 60% to 65% of operating profits -- shows that growth has slowed in recent years. 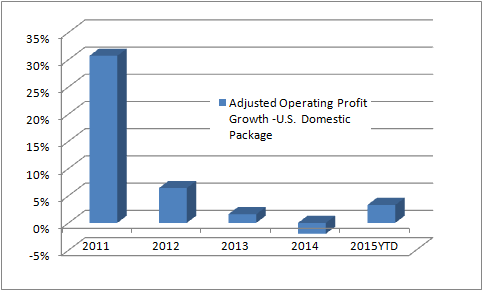 UPS has suffered two consecutive weak fourth quarters, as the company struggled to deal with severe winter conditions in 2013 -- FedEx also had issues -- then overinvested for 2014, and saw profits hit as it was left with excess capacity on certain days in the peak demand season. I've already looked at what FedEx and UPS are doing to deal with peak this year, and discussed one structural reason that FedEx might be better suited to handle it.

Guidance implies flattish sequential growth
After two difficult holiday seasons, UPS investors will be hoping no hiccups occur this year, but there are question marks around UPS' underlying profitability even if UPS executes as planned in the fourth quarter.

Indeed, the question came up on the recent third-quarter earnings call, when Wolfe Research analyst Scott Group asked whether "something has changed" with regard to the sequential improvement in earnings from the third to the fourth quarters.

His point was that management is predicting fourth-quarter operating profit growth in the U.S "in the low double-digits" -- a growth rate that implies flat sequential (third- to fourth-quarter) growth.

As you can see in the chart below, sequential revenue growth (from the third to the fourth quarters) has increased, but in the last two years, adjusted operating profit growth has been weak, and the guidance for 2015 -- the 1.7% figure just calculated -- implies a slowdown from traditional sequential growth rates. 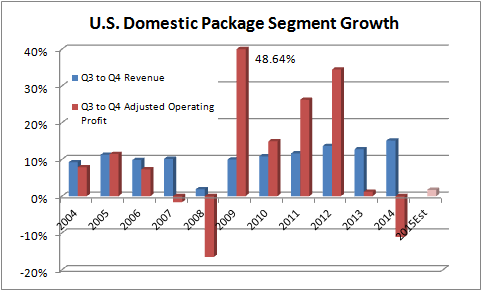 In response to Group's question, UPS CEO David Abney said, "[P]rior to this big growth in B2C e-commerce ... our average peak day was increasing volume, somewhere around 50% over a typical day. Now, with e-commerce, last year we approached 75% over." And, he noted, "the relationship between third and fourth quarter has just migrated a little bit just over this B2C growth."

Frankly, based on all of this, it looks like dealing with peak demand will be as much a challenge as an opportunity.

The takeaway
All told, as you can see in the second chart above, it seems that after three strong fourth quarters from 2010 to 2012 -- when UPS profited nicely from e-commerce growth during the holiday season -- the last two years were very difficult. This year's projected growth isn't looking stellar, either, even if the considerations above are kept in mind.

It's not that UPS doesn't have good growth prospects from e-commerce. After all, e-commerce deliveries are made all year round, and any business would want a pickup in end demand. However, it appears the Thanksgiving to Christmas period doesn't represent the huge growth opportunity for the company that it might have seemed to offer a few years ago.