What: Shares of Skechers (NYSE:SKX) collapsed in October, falling by 30.2%, according to S&P Capital IQ data, after the footwear company missed analyst expectations for revenue when it reported its third-quarter results.

Despite these seemingly impressive results, analysts expected quite a bit more. Skechers fell short of analyst estimates for revenue by about $20 million, and the stock tanked as a result. On the earnings front, the company reported GAAP EPS of $0.43, up 30% year over year.

Now what: Skechers didn't provide specific guidance, but the company did say during the conference call that it was comfortable with the current consensus analyst estimates for the fourth quarter. On average, analysts expect year-over-year revenue growth of 22.7% in the fourth quarter.

The reaction to Skechers' revenue miss was extreme during October, but the stock has run up quite a bit during the past few years. Between the beginning of 2013 and August of this year, when the stock reached its 52-week high, shares of Skechers rose more than 700%. Even after the decline in October, the stock is still up more than 400% in that time. 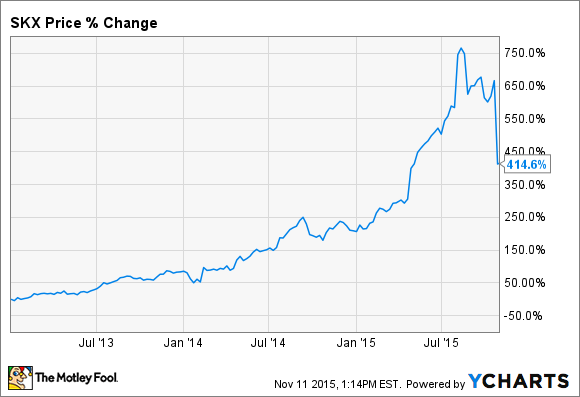 Skechers' valuation at its 52-week high had significant growth baked in. The stock traded at about 3.5 times 2014 sales, and 60 times 2014 GAAP earnings at its peak in August of this year. When valuations get that high, anything short of perfection can send a stock tumbling. That seems to be exactly what happened with Skechers in October.