What: Video game specialty retailer GameStop(NYSE:GME) is down 16.5% on Nov. 13. Coming into the day, the company's stock was strongly outperforming the market, up over 30% year-to-date: 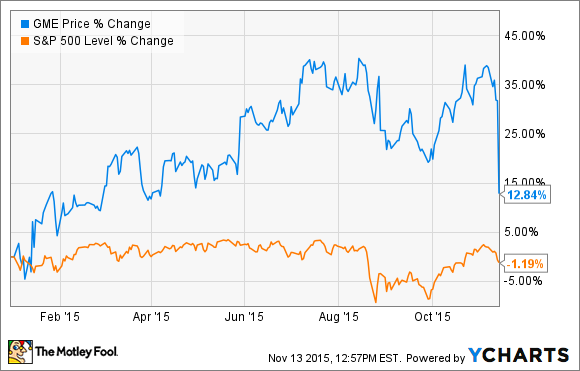 So what: It looks like GameStop is feeling the effects of two things today. First, a downgrade of the company's stock by an analyst with Pacific Crest is probably the biggest factor. The analyst stated real concern about the growing impact of the shift to digital downloads in the video game industry hurting GameStop.

A recent Wall Street Journal article noted sales of Microsoft's(NASDAQ:MSFT) hugely popular Halo franchise's latest title, Halo 5: Guardians, were reported to be the best-ever in the series for the first week of launch, coming in at over $400 million. However, brick-and-mortar retailers like GameStop seem to have enjoyed less of the action, with physical game units selling less than half of what some in the industry had predicted.

Microsoft gets a boost from digital downloads in two ways. First, the company's costs are lower, with no physical media to produce, package, store, and ship to retailers. Second, margins are better with digital distribution because of the lack of a physical product but also since there doesn't have to be a retailer wedged between Microsoft and the customer (though there still often is). The point is, it's much better for Microsoft, while retailers like GameStop stand to lose the most since their presence in the middle will continue to be diminished.

Second, GameStop's stock isn't the only retail company down today. The market is selling off broadly over concerns of weakening retail sales in October as reported by the Commerce Department.

Now what: As much as GameStop's stock has shot up on relatively decent results, but as Fool Rick Munarriz noted recently, the company's steps to back away from its efforts to grow digital downloads from its online store don't seem very sustainable. And the recent results of Microsoft's Halo 5 seem to support that reality.

Even Microsoft has made efforts to not get too attached to its legacy business, moving away from charging for its flagship Windows operating system for consumers to a free model that should encourage more users to upgrade to new versions and stay in the "ecosystem". GameStop could learn a lot from the software giant.

The point is, just because physical disks are better for GameStop's business model, that doesn't mean that consumers will prefer it. To the contrary, the trends are apparent that's not the case. If GameStop management continues to try swimming against the current of digital downloads, there's a good chance that it goes the way of the music store.