Chastened by the financial crisis, U.S. companies have spent the post-crisis years repairing their balance sheets, accumulating an enormous cash trove in the process. USA, Inc. now has a "fortress balance sheet" (to use JPMorgan Chase CEO Jamie Dimon's turn of phrase).

Try this narrative on for size instead: U.S. companies have been releveraging their balance sheets such that debt levels have now doubled relative to the levels that prevailed at the height of the credit bubble in 2007.

Companies in the United States have taken advantage of low interest rates to issue record levels of debt over the past few years to fund buybacks and M&A. This has driven the total amount of debt on balance sheets to more than double pre-crisis levels.

That jump in debt is shown in the following graph, which displays the aggregate debt level (dark blue line) and interest expense (light blue line) for the companies in Goldman's North America coverage universe, indexed to 100 in 2007 (left-hand axis): 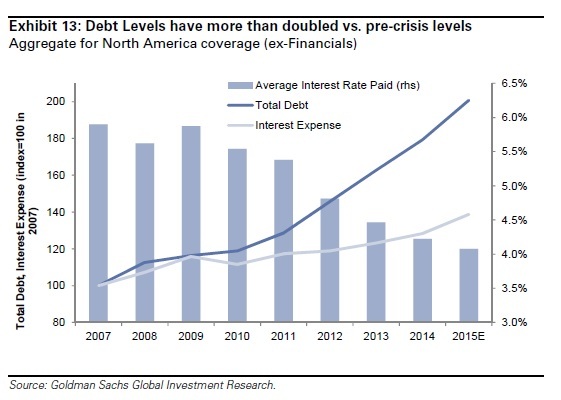 While the debt level has more than doubled relative to 2007; however, the interest expense has risen at less than half that rate due to the significant decline in interest rates during that period; the latter phenomenon is represented through the blue bars, which are measured against the right-hand axis.

But what about the enormous cash pile U.S. corporates have built? Doesn't it mean balance sheets are much healthier than gross debt levels would indicate? Not according to the next graph: 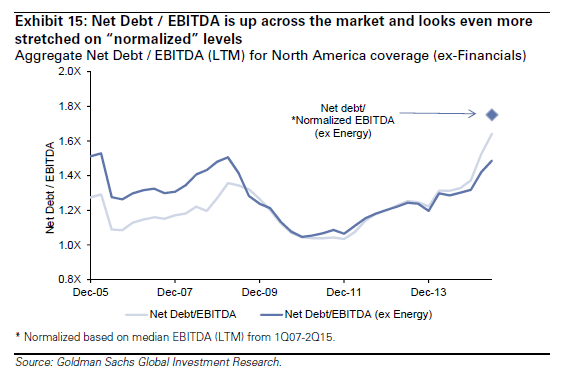 This graph shows the ratio of net debt (i.e., debt minus cash) over EBITDA (earnings before interest, taxes, depreciation, and amortization -- a measure of cashflow) since the end of 2005. That ratio (dark blue line) is back to the highest level achieved during the credit crisis. Once you remove energy companies, the rebound in the "normalized" ratio (light blue line) is even more pronounced.

(U.S. energy companies took on significant debt during the last few years; removing them shows this isn't enough to explain the increase in aggregate debt.)

Like a bad dream, imbalances have been building the last few years. ... While neither [debt nor goodwill] poses an immediate terminal risk to the health of corporate America, the changing nature of corporate balance sheets does raise the question, again, about the lack of organic growth and reinvestment post the crisis.

With the United States on the verge of the first interest rate hikes in almost a decade, we question the sustainability of these trends [rising leverage and goodwill].

Unfortunately, companies themselves appear to be oblivious to that question. Indeed, Goldman's well-regarded Portfolio Strategy group published a note of its own this week, according to which companies in the S&P 500 are planning a greater percentage increase in the amount they spend on buybacks, dividends, and mergers and acquisitions in 2016 than on capital expenditure and research and development.