Comcast (NASDAQ:CMCSA) has plans to launch a wireless phone service ostensibly to compete with AT&T, Verizon (NYSE:VZ), Sprint, and T-Mobile, according to Bloomberg.

The product would use a hybrid of cellular networks and Wi-Fi to deliver phone service and data to subscribers. If the company moves forward with the plan, which it has confirmed it plans to begin testing, this would give the company the option to sell so-called "megabundles" featuring cable, home phone service, Internet, and wireless. That would make it a stronger rival to AT&T, which enhanced its ability to sell all four services when it purchased DirecTV earlier this year.

Comcast has not yet announced that it will actually launch a wireless product, but it is taking steps in that direction.

What is Comcast doing?
The company has informed Verizon that it's invoking its right to resell Verizon's wireless service as part of a 2012 airwaves deal, according to Bloomberg:

Under that agreement, a consortium of cable companies led by Comcast sold nationwide spectrum licenses to Verizon for $3.6 billion and secured the rights to resell its wireless services.

Verizon CFO Fran Shammo confirmed during the company's third-quarter earnings call that a cable company had invoked its rights under that agreement, though he did not specifically name Comcast.

How would it do it?
If Comcast was to launch a wireless service, it would likely be a network that used Wi-Fi first before looking to Verizon's network. By doing it that way, the company could take advantage of its existing network while minimizing costs for customers.

Cablevision (NYSE: CVC) has actually launched a Wi-Fi-only wireless service that costs $9.95 a month for subscribers, and $29.95 for non-subscribers. That's a low-cost offer, but it's also a very limited service that only functions in the company's coverage area. The Comcast offer would have the advantage of being able to use Verizon's top-rated network when consumers are not near a strong enough Wi-Fi signal.

What will it cost?
Using Wi-Fi and paying Verizon to access its network should allow Comcast to price its service attractively.

"This will be bad for the carriers, with the possible exception of T-Mobile US, and good for cable," Jonathan Chaplin, an analyst with New Street Research LLC, wrote recently, Bloomberg reported. He suggests the company will be able to charge at $25 to $30 a month -- less than the major carriers.

It's a good idea in theory, but it's hard to imagine the not-very-well-liked cable company will have an easy time signing up customers, even if it offers slightly cheaper service.

Why won't it work?
Despite Chaplin's optimism, Comcast will not be the first low-cost hybrid wireless service. Discount carriers including FreedomPop have employed the technology and sold very cheap plans (starting at free in FreedomPop's case) without gaining real market share. The cable giant will have the ability to cross-market to its existing customer base, but those people don't seem to like the company very much.

The latest American Customer Satisfaction Index's (ACSI) annual report ranks Comcast at the bottom or near the bottom of the major company rankings in TV, Internet, and phone service. The company scored a 54 in subscription TV, well below the industry average of 63; the lowest in the category, at 56, as an Internet service provider; and a better, but sill dismal, 64 in fixed-line phone service.

All of the major wireless players put those numbers to shame, as you can see on the ACSI chart below: 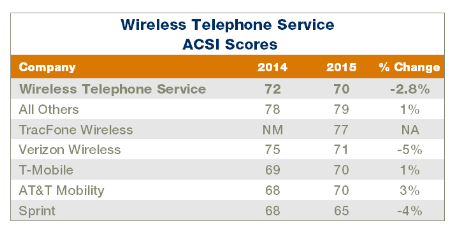 It's just not enough
Given its ACSI ratings, it's safe to say many Comcast customers are not that pleased with the company, which makes me very skeptical that they would trust it with their wireless service when other options exist. Yes, a $25 Comcast plan would be slightly cheaper than, say, the $30 offer from T-Mobile's MetroPCS brand, but it feels like a much riskier proposition.

That's not to say Comcast can never compete with the big four. It has acknowledged its customer service shortcomings and has pledged to fix them. If it can pull that off and win back consumer trust, it could become a wireless player. Until that happens, though, it seems very unlikely people will expand their relationship with the company in an area where they have other choices.