Matthew Frankel, CFP, Selena Maranjian, Sean Williams, Dan Caplinger, Jason Hall, and Cheryl Swanson
(TMFMathGuy)
Author Bio
Matt is a Certified Financial Planner based in South Carolina who has been writing for The Motley Fool since 2012. Matt specializes in writing about bank stocks, REITs, and personal finance, but he loves any investment at the right price. Follow him on Twitter to keep up with his latest work! Follow @TMFMathGuy 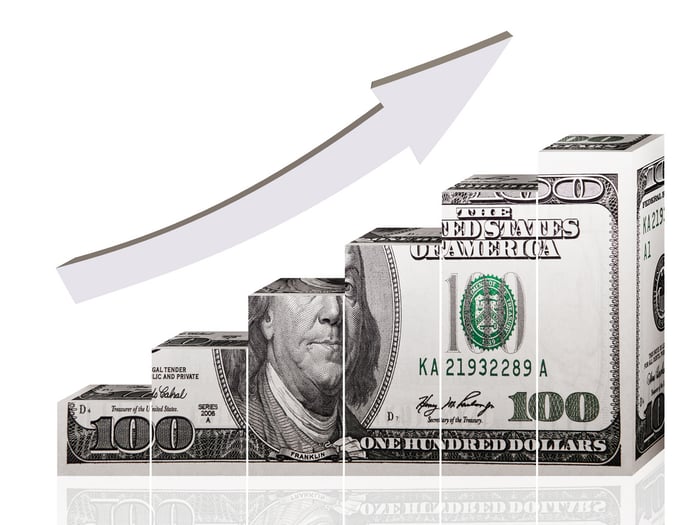 As long as most of your money is invested in high-quality, stable companies, there's absolutely nothing wrong with doing some speculating on companies with massive potential for gains. With that in mind, here are six stocks that our experts feel have a realistic chance to double within the next year.

Selena Maranjian: Lumber Liquidators (NYSE:LL) is one stock that could double in 2016. A key reason for that is that the stock has plunged more than 70% during the past year, dropping enough to now make it look like a bargain, according to some measures. You can't assess its price-to-earnings (P/E) ratio because it recently posted a net loss, not net earnings. But its price-to-sales ratio was recently 0.4, well below its five-year average of 5.5 and the S&P 500's average of 2.8. Its price-to-cash-flow ratio was 7.7, well below both its five-year-average and the S&P 500's recent level of 11.6.

Numbers aren't everything, though. A look at the big picture will reflect why the stock cratered: The company was whacked by several scandals, leading to much of its top management, including its CEO and CFO, resigning or being replaced. (The scandals featured a powerful 60 Minutes story alleging that the seller of hardwood flooring and other materials had been selling products from China with illegal levels of the carcinogen formaldehyde in it -- and selling some flooring made from illegally harvested wood.)

Where is the company now? Well, there is a path to recovery -- though it's far from certain, as the company is still the subject of various investigations. The stock may well fail to double any time soon. Still, it now has a new CEO, is "developing stronger relationships with suppliers," and plans to open more than 20 new stores this year.

In its third quarter, revenue dropped 11% year over year due partly to scandal-related weakened demand, and also to "our suspension of sales of all laminate flooring sourced from China and the disruption of supply during the replacement of certain engineered hardwood vendors, as well as a stronger competitive environment." Lumber Liquidators' recent price presents a great entry point if you believe in its future.

Sean Williams: There's no beating around the bush: 3D printing companies have had a dismal year. However, looking into 2016, investors with a high tolerance for risk looking for a longer-term growth story might be wise to dig into 3D Systems (NYSE:DDD).

With its shares down around 90% from their peak, 3D Systems looks like a mess. Fresh off yet another quarterly EPS and revenue shortfall in the third quarter, 3D Systems put the blame on weakened capital investments and reduced demand across the globe. It's also dealt with supply chain issues related to the introduction of new products during the last couple of years.

However, there are reasons to believe that 3D Systems could have a much brighter year in 2016. To begin with, the company is seeing growth in its healthcare segment, and it ended the latest quarter with $157.5 million in cash on hand. At the moment, this cash comprises around 15% of the company's valuation, and is acting as extra cushion for the company while it attempts to navigate choppy global demand in non-healthcare industries.

3D Systems also has an exceptionally high level of short interest: 33.8 million shares compared to a float of 106.3 million shares. With the company now trading below book value and well capitalized, it wouldn't take much good news -- say a revenue beat in 2016, or an earnings-accretive acquisition -- to create a possible short squeeze.

Finally, we're talking about a long-term growth story that, at least on paper, seems to make a lot of sense. 3D printing has the ability to lower long-term business expenses across a variety of industries. If 3D Systems can simply demonstrate sales stabilization in 2016, it's possible the stock could see the $20 level once again.

Cheryl Swanson: Targeted cancer treatment biotech Exelixis (NASDAQ:EXEL) has a shot at doubling in 2016, based on the chance it could vastly expand the commercial potential for one of its drugs. Chance is the key word here, because Exelixis is strictly a high-risk/high-reward stock. Still, thanks to a nod from the FDA, the company now has two highly promising drugs on the market.

Exelixis' first drug, Cometriq, is already being used to treat a rare form of thyroid cancer. Cometriq hauled in sales of $17.4 million in the first half of 2015. While that's pocket change for a cancer drug, the company is working hard to expand Cometriq's indications. Next up is approval for kidney cancer, and thanks to a near-doubling of progression-free survival in its METEOR study, that approval looks almost in the bag.

Kidney cancer is one of the top ten most commonly diagnosed forms of cancer in the U.S., so an FDA nod would expand the drug's potential from just a few hundred patients a year to a treatable population of 17,000. Cometriq is also being evaluating in liver cancer, with final data expected in 2017.

Exelixis has another extremely exciting product in its pipeline -- cobimetrinib. On November 10, the FDA green-lighted the drug as part of a melanoma "cocktail" treatment with Roche's (OTC:RHHBY) Zelboraf. The cobi/Zelboraf combination has enormous potential to become the standard-of-care therapy for BRAF-mutated melanoma patients. At least one analyst has projected a possible $790 million revenue opportunity just in the U.S., where Exelixis has a 50% profit share. Doubling is a tall order, but this biotech appears to have turned the corner in its clinical pipeline, and the stock is certainly worth monitoring.

Matt Frankel: One stock that I think has the potential to double (or more) in the next year is Twitter (NYSE:TWTR). Not only is the stock trading at a huge discount -- down more than 46% since April -- but there are several reasons to be optimistic going forward.

Twitter's revenue continues to grow impressively, up 64% from the same quarter a year ago. And although it's occurring at a slower rate than in previous years, Twitter's active user base continues to grow. CEO Jack Dorsey is back in control, and seems genuinely committed to getting the company pointed in the right direction.

Most importantly, Twitter's management understands what the problem is. With 95% brand recognition in its key markets, but only a 30% penetration rate, Twitter is simply not appealing enough to the masses -- yet. In other words, too many people don't really understand why they should use Twitter. In the company's press release, Dorsey said that the company's three main priorities are "ensuring more disciplined execution, simplifying our services, and better communicating the value of our platform."

Recently, the company has taken steps to appeal to the masses with newer offerings such as Moments, Vine, and Periscope. The bottom line is that Twitter knows what it hasn't done well, and is investing considerable resources to fix it. If successful, we could see Twitter's user base spike, which would translate to higher revenue and a boost to its stock.

Dan Caplinger: It takes a special stock to double in a single year, and often, those stocks also carry big risk. That's certainly true of iron-ore specialist Cliffs Natural Resources (NYSE:CLF), which has been struggling with poor conditions in the commodities markets along with the operational challenges of restructuring to focus on its best profit opportunities.

Cliffs Natural's stock has plunged in recent years as it pulled back from its presence in Canada, and largely concentrated on its assets in the Great Lakes region. With the goal of supplying steelmakers in the region, Cliffs wants to use its geographical proximity to fend off international competition and sustain premium prices compared to the world market. Efforts to cut costs have had some success, but what could really move the stock price higher would be an unexpected boost in iron-ore demand that would, in turn, drive market prices for the commodity upward.

With massive short interest of 40% of the company's share float, many investors are betting against Cliffs Natural, and there's a real risk that shareholders could lose everything if the company's strategy fails. Nevertheless, if Cliffs can pull off a victory, it could squeeze short-sellers and create a huge run-up in the stock to recover some of its lost ground in recent years.

Jason Hall: One stock with a great chance of doubling over the next year or so is Chart Industries (NYSE:GTLS). If you've followed the company for a few years, you may think I'm crazy, considering the company's stock is down 85% from its peak in late 2013: 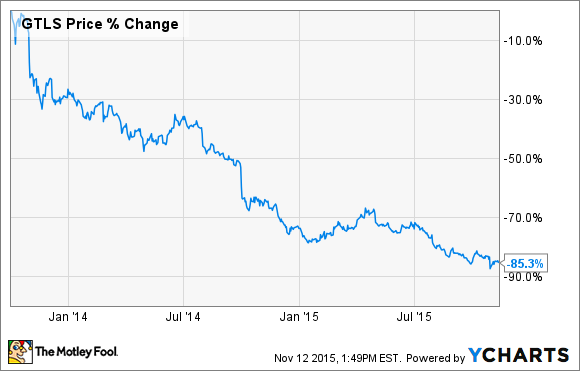 Chart's core business is cryogenic gas processing for the energy, industrial, and biomedical industries. Huge expectations that global demand for natural gas would lead to big growth for Chart led the company's stock to skyrocket to those levels before steadily declining ever since.

This is less of a reaction to the quality of Chart's business, and more a "normalization" of the stock price from the market's high expectations, which haven't really panned out. The thing is, the sell-off looks far overdone: 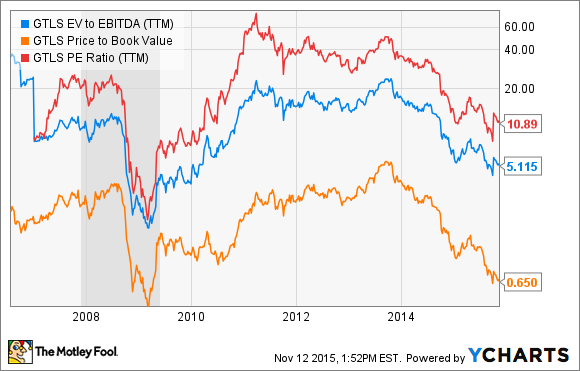 Chart's stock price has fallen because the expectations have changed; but we aren't talking about a company on the edge of failure: 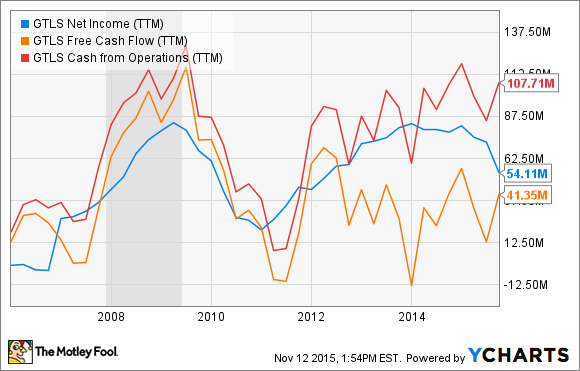 Not only has the company been consistently profitable, but management has taken steps to lower costs in the current demand environment, setting it up to comfortably ride out the downturn until demand recovers. Once the market catches on, Chart's stock is likely to go way up.