GlaxoSmithKline (NYSE:GSK) has an eye-popping dividend yield of 5.75%, but that doesn't necessarily make it the best dividend-paying option available to investors.

In fact, with GlaxoSmithKline's product portfolio facing a key patent expiration, investors might find that investing in Pfizer (NYSE:PFE), one of GlaxoSmithKline's largest competitors, is a better option in spite of its lower 3.37% dividend yield.

Patent woes
In the wake of patent expiration, both of these drug giants have seen sales slide significantly over the past five years and that's led investors to approach both companies cautiously.

The expiration of patents on top-selling medicines, such as Paxil, led to GlaxoSmithKline's trailing-12-month sales falling to $37.9 billion from a peak of roughly $45 billion in 2008, and the loss of patent protection on the megablockbuster cholesterol fighter Lipitor caused Pfizer's annualized sales to slump to less than $50 billion from more than $60 billion during the same period. 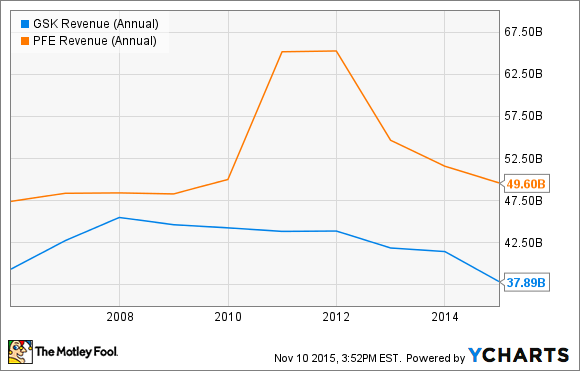 Because both of these companies are wrestling with patent woes, dividend investors may be best served looking beyond GlaxoSmithKline and Pfizer's current financials and consider which of these two companies is best positioned to return back to growth soonest.

On that basis, Pfizer appears to be the better bet because GlaxoSmithKline is about to lose patent protection on its top-selling Advair Diskus next year.

Although Advair lost patent protection in 2010, patents protecting the Diskus inhaler until 2016 have kept generics off the market. However, once the inhaler patent expires, a number of generic drugmakers may file for FDA approval of their own generic Advair, and if those generic alternatives win over FDA regulators, then GlaxoSmithKline could see sales plummet because Advair Diskus' is GlaxoSmithKline's best-selling medicine.

Advair sales are clocking in at an annualized sales run rate of about $4.8 billion exiting Q3, and through the first nine months of 2015, Advair accounts for about 20% of GlaxoSmithKline's total sales. Given that approximately $2.4 billion of Advair's sales comes from the U.S. market, the loss of patents in that market could be significant. For example, GlaxoSmithKline told investors in May that if generics are approved, U.S. Advair Diskus sales could drop below $300 million by 2020.

Finding their footing
Since Advair is a relatively complex medicine, there's still some debate over whether competitors can create a generic Advair, but assuming that it's just a matter of time before generic Advair is a reality, then GlaxoSmithKline's newest respiratory drugs will have to do a lot of heavy lifting if GlaxoSmithKline hopes to maintain its market share.

Unless Anoro Ellipta and Breo Ellipta sales improve measurably, pressure to protect GlaxoSmithKline's sales falls instead to GlaxoSmithKline's other fast-growing drugs, most notably the HIV therapies Tivicay and Triumeq. Sales of those two drugs have jumped about 100% in the past year to about $200 million in Q3, so they have blockbuster potential.

Regardless, Pfizer's path back to growth appears to be far less uncertain.

Pfizer entered 2015 with six drugs in registration and 23 phase 3 trials underway and that a flush late-stage pipeline could lead to newly approved drugs that could complement Pfizer's rapidly growing therapies, including Ibrance and Eliquis, and vault Pfizer back to top-line growth in 2016.

In fact, we may have already seen the corner turn for Pfizer. In Q3, strong sales of what it terms "early life-cycle" drugs helped it deliver 4% year-over-year organic sales growth. That performance allowed Pfizer to bump up its full-year revenue projection to at least $47.5 billion in 2015 from prior expectations of at least $46.5 billion. As a result, industry watchers think that sales could improve to $52.5 billion next year. 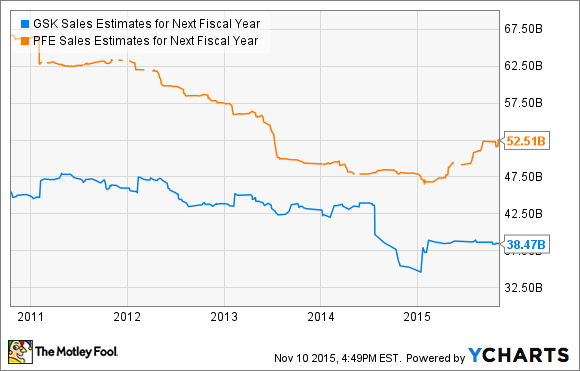 GSK Sales Estimates for Next Fiscal Year data by YCharts.

Looking ahead
GlaxoSmithKline and Pfizer are both cutting costs significantly and their restructurings should give both companies plenty of leverage to generate profit growth when sales stabilize and head higher. Fewer expenses will go a long way toward protecting both companies' current dividend payouts, but in my view, it's sales growth that is key to long-term dividend increases. For that reason, I believe that Pfizer is a better dividend buy than GlaxoSmithKline.