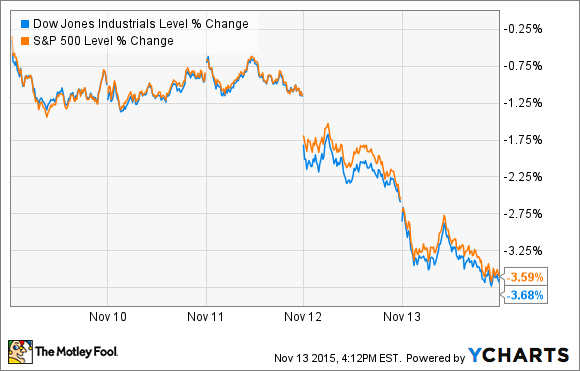 One of the encouraging factors came this week when job openings rose in September to a seasonally adjusted 5.53 million from August's 5.38 million level – the second-highest level in the history of the series since December of 2000. Another positive market factor was when initial jobless claims checked in at 267,750 for the four-week average which is close to the lowest level in years.

These macro factors took a toll on stocks and some companies got dinged for lackluster earnings reports.

Weak sales and forecast
Macy's (NYSE:M) had a rough go of it this week. Shares plunged 20% after a worse than expected slide in sales during its fiscal third-quarter. The retailer, which is the largest U.S. department-store company, posted a 5.2% decline in revenue to $5.87 billion for its fiscal third-quarter which was below analysts' estimates of $6.1 billion and the steepest decline since its fiscal second-quarter of 2010.

There are many variables to consider when looking into Macy's disappointing third-quarter, but warm weather hurt the demand for Macy's fall products, in addition to already weak foot traffic, and it's possible that as sales of big-ticket items such as new-vehicles continue to surge, consumers are spending less on clothing and retail purchases.

That notion is backed up by Stifel analyst Richard Jaffe which had this to say when speaking about Nordstrom's 18% plunge in stock price. "The sales slowdown was evident across all categories, except cosmetics. The shift we have seen over the past several years in which consumers have chosen to spend on "big ticket" merchandise (cars, homes and home renovations, electronics and smartphones) and experiences seem particularly apparent given the results at JWN." according to Barrons.

Speaking of big ticket items, investors of General Motors (NYSE:GM) received some good news out of one of the automaker's critical markets for sales. Purchase-tax cuts do the trick
Investors of global automakers had grown anxious over the past few months as sales completely stalled in the world's largest automotive market, China. However, in an effort to rekindle sales of new vehicles China's government stepped in and reduced the purchase tax applied to new vehicle sales from 10% to 5% as long as the vehicle was equipped with a 1.6-liter engine or less – which covers about 70% of autos sold in China.

The purchase-tax cut will run through the end of 2016 and sales have immediately accelerated higher as China's passenger-vehicle sales were recently reported to have risen 13% in October, the fastest pace in 10 months.

"The effect from the purchase sales tax cut has been positive and should last for a few months," said Yang Jing, a Shanghai-based associate director at Fitch Ratings, according to Automotive News. "China's economy is in transition and consumption will become a bigger part of its growth. Helping to boost auto sales is part of the government's plan."

General Motors is very likely to benefit the most from developments in China. That's because GM has been in a heated race with Volkswagen to own the title of the best-selling foreign automaker – and third place remains far behind those two. However, with Volkswagens sales declining globally because of its diesel emissions scandal, as well as China's purchase-tax cut stimulus, GM's sales in China rose 15% in October, compared to last year, with Buick posting its best-ever month of sales.

Despite this very positive news for GM in such a critical market, it failed to boost the stock price amid a slump in major indexes – GM traded roughly 4% lower this week, mimicking declines in the Dow and S&P 500.

Great quarter but not so great guidance
Further proving that it was tough sledding for many stocks this week, The Priceline Group (NASDAQ:BKNG) declined about 10.5% for the week after a pretty sound third-quarter. After the stock price enjoyed a nearly 18% run-up during October, it gave nearly half of those gains back this week after management warned investors that a strong U.S. dollar would ding fourth-quarter results and that it would remain a headwind throughout 2016.

Despite near-term headwinds, online travel bookings will continue to surge globally over the next decade and Priceline is well positioned to benefit.